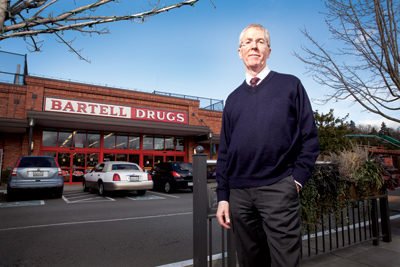 One CVS Pharmacy initiative that Bartell Drugs wont be following is CVSs move to stop selling tobacco products by October 1 of this year. George Bartell says the issue has been discussed internally and the deciding factor is smoking is legal and customers want to purchase this product from us.
Bartell adds: We dont promote cigarettes or display them prominently. On the other hand, we do display smoking-cessation products prominently, advertise them from time to time, and our pharmacists are eager to advise our customers about the use of such products. Smokers probably dont have that option available at a convenience store. If demand [for tobacco products] gets to be low enough, we will discontinue them, as we would any other product. When we are able, we try to stock what our customers want to purchase. Im in favor of offering customers choices and letting them decide what to buy. Im resistant to letting some people impose their values and biases on others. They generally dont like it if the tables are turned.