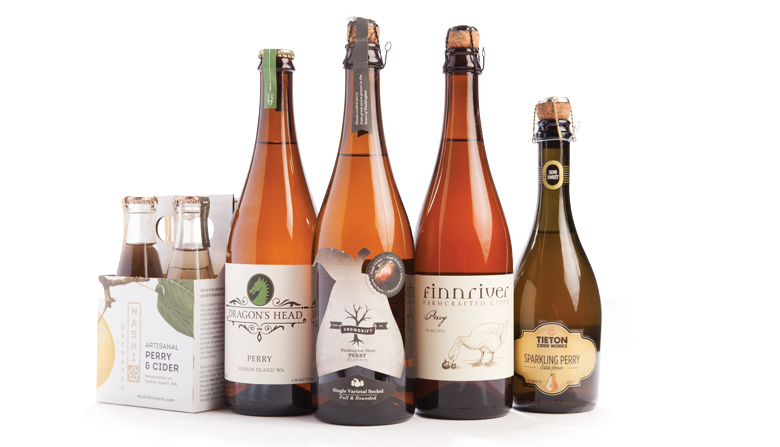 Lightly sparkling and faintly fruity, the traditional European drink known as perry has found an ideal production climate and an appreciative audience in the Pacific Northwest.
A surge of enthusiasm for this Old World beverage made from fermented pears began with cider makers looking for new ways to use fruit and continues to grow as drinkers fall in love with perrys clean crispness, which nestles somewhere between Champagne and apple cider.
Perry is made using a method similar to that for making cider, by crushing the pears and fermenting the juice with yeast. But the key to the flavor comes mainly from the pears themselves, specifically any of the many varieties known as perry pears bitter, hard, gnarled siblings of traditional dessert pears that undergo a fairy-tale-like transformation to become this delicate drink.
Good perry needs good pears, and ours rock, says Jill Lightner, who served on the board of the Northwest Cider Association for many years. Washington and Oregon together produce 84 percent of the pears grown in the United States, and many local perry makers have stumbled upon heirloom stashes of the tannic, nearly inedible types of pears best for making it. The fruit grows on trees planted ages ago and, until now, much of it was going to waste.
In the past five years, more and more perry has appeared on shelves. Lightner attributes this to our regions being full of nerds who love tinkering and who happen to have access to fruit trees.
And tinker they must, says Tim Larsen of Wenatchee-based Snowdrift Cider Co., which produces two styles of perry annually. Perry is much more difficult to make than cider, he notes. One reason: Pears are high in citric acid, which easily converts to vinegar during fermentation if the producer isnt careful. Properly made perry, Larsen says, matures and softens with the aging process, resulting in a mild beverage that doesnt scream of the fresh pears that went into it. Lightner agrees, suggesting that the best perry needs to whisper, Pssst, hey, over here. A pear, to get your palates attention, and should disappear right as youre thinking about it.
That subtleness can take many forms, from the dry, tannic Finnriver version to the fruit-forward Dragons Head perry. Others, such as the Snowdrift Reserve, are subjected to methode champenoise for a final in-bottle fermentation, leaving the perry drier and with a bit of yeastiness. But perry remains less alcoholic than most wines, rarely going beyond 8 percent alcohol by volume (ABV), and sometimes closer to beer at 5 percent. Perry, like Champagne or white wine, can fall anywhere in a range from sweet and fruity to tannic and mineral, but ultimately, most are like sheets fresh from the wash: clean, dry and pleasantly aromatic.
TASTING NOTES
The delicacy of perry requires a bit of thought when it comes to knowing what to serve it with, to avoid overwhelming the subtleties of the pear flavors. Ive never met a perry that didnt benefit from being well chilled, says Jill Lightner. Beyond that, she generally suggests serving it with milder aged cheeses and sweeter shellfish. Perries can be hard to find at grocery stores, but larger liquor stores and specialty bottle shops will stock them.
NASHI ORCHARDS IMAMURA AKI
$25/four-pack of 6.7-ounce bottles
Vashon Islands Nashi Orchards puts a distinctive spin on the perry genre by using Asian pears for the bulk of the flavor, in combination with perry pears for added structure. Though the initial aroma hits the nose as a bit sulfuric, the flavor remains crisp, with hints of plum but none of the sweetness, finishing with a refreshingly sharp edge (6.7 percent ABV). PAIRING SUGGESTION: Excellent on its own or with raw fish dishes like sushi or crudo.
DRAGONS HEAD PERRY
$18/750-milliliter bottle
Another perry from Vashon Island offers a mix of Taylors Gold pears, English perry pears, fruit from 100-year-old homesteader trees and Vashon seedling pears. It enters with a bit of sweetness almond and honey flavors coming forward with enthusiasm and effervescence before washing away in the lightly astringent finish (6.3 percent ABV). PAIRING SUGGESTION: Will stand up to spice and heartiness, so go with a Thai curry.
SNOWDRIFT RESERVE PERRY
$20/750-milliliter bottle
This combination of eight varieties of perry pears results in a hefty beverage full of fermented pear flavor. Use of the methode champenoise mutes the sweetness and produces a juicy but balanced perry similar to a classic apple cider in flavor and structure (8 percent ABV). Wenatchee-based Snowdrifts other perry, a Seckel pear varietal, is also worth seeking. PAIRING SUGGESTION: Buttery pasta, Beechers Flagship cheese.
FINNRIVER PERRY
$22.99/750-milliliter bottle
Neighbors bringing by crates of gnarled pears from an old orchard inspired this pink-hued blend, produced by Finnriver in Chimacum (near Port Townsend on the Olympic Peninsula). An intense dryness, even with a touch of added sugar, gives the pear flavor more room to play. High tannins and hints of grapefruit make this tough to drink on its own, but it proves balanced and exciting in partnership with rich foods (6.3 percent ABV). PAIRING SUGGESTION: Creamy cheeses like Brie or Camembert.
TIETON CIDER WORKS SPARKLING PERRY
$12.99/500-milliliter bottle
This blend of 11 different perry pears from the Yakima-area cidery is not quite as dry as many of the others, letting the pear flavor skew toward that of biting into a fresh dessert pear. The gentle effervescence and full body (5.5 percent ABV) make it approachable and versatile a perry thats difficult to mismatch or disagree with. PAIRING SUGGESTION: Excellent alone or with halibut.