Its Josh Hendersons world; here's your guide to eating in it. 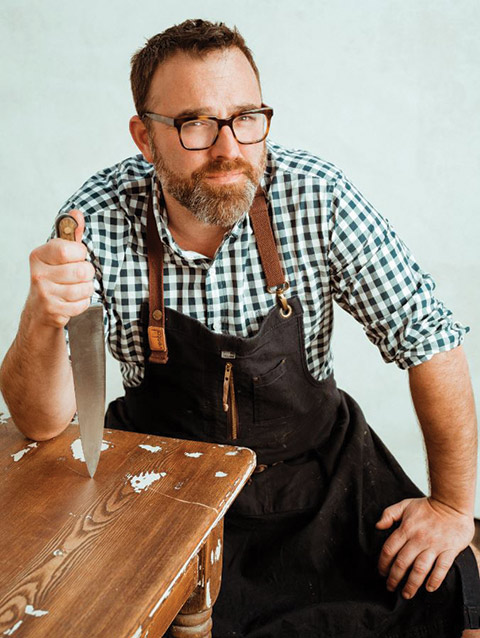 Ten years ago, Josh Henderson left a sweet gig cooking for photographers on location in Los Angeles to start a food truck in Seattle called Skillet. It did quite well, expanding with help from equity partners into four brick-and-mortar diners and a catering company.

Henderson left the Skillet Group in 2013 to again do his own thing, that being the Huxley Wallace Collective (named for Henderson’s two sons). Today, hes the brains behind 10 restaurants, eight of them coming to life this year. While its impressive and challenging to open so many locations in quick succession, the real story is Hendersons vision. Food and flavor are important, but equally, or more so, is the diners experience.

Each restaurant is stylized. We want to create joy and a sense of discovery for our guests, says Hendersons creative director, Matthew Parker, largely responsible for the look at each venue. To Joshs credit, he has put design on the same level as customer service and food, which is really new.

Dont know where to start? Use this primer to tell the restaurants apart and experience them for yourself. Find more info at huxleywallace.com.

QUALITY ATHLETICS
Pioneer Square | 121 S King St.
The name: I wanted something a little kitschy and a little ambiguous.
The vibe: A 195-seat sports bar on steroids.
What to order: Jerk-spiced duck wings seasoned with cinnamon and cayenne, with pickled pomegranate seeds and lime yogurt ($12).

WESTWARD
North Lake Union | 2501 N Northlake Way
The name: Inspired by a painting Henderson saw in a ship-supply store. I saw it and it stuck in my head.
The vibe: A yacht club for misfits.
What to order: House-made potato chips served with tonnato and capers ($12).

GREAT STATE BURGER
Downtown | 2041 Seventh Ave.
Laurelhurst | 3600 NE 45th St.
The name: We were going for something generic but that also drew on the state pride we have.
The vibe: From the cornflower blue color scheme to the crinkle-cut fries and cheery polka-dot burger wrappers, Great State Burger is Americana on Prozac.
What to order: Steaming hot french fries ($3) are a must with the organically raised grass-fed beef burger ($5.50). Add an 8-ounce shake featuring locally made Parfait ice cream ($3.50).

BAR NOROESTE
Downtown | 2051 Seventh Ave.
The name: It means northwest in Spanish. Enough said.
The vibe: Small, dark and sexy, with charred-wood elements and blue-gray-green concrete Mexican tiles that change color depending on the light shining through the street-front windows.
What to order: Tacos for two 10 handmade tortillas with your choice of two proteins, served with chef-paired veggies, dressings and a selection of house salsas ($45).

SAINT HELENS CAFE
Laurelhurst | 3600 NE 45th St.
The name: A nod to our lopped-off mountain to the south. The saint was the part that showed a bit of brasserie, Henderson says. I also just like how the words look.
The vibe: Bright and feminine, with mismatched vintage china, gold cutlery and locally made pink paper flowers. Super intimate.
What to order: Slow-braised chuck in a spring onion soubise with charred savoy cabbage and demi sauce ($24).

SCOUT
Downtown | Thompson Hotel | 110 Stewart St.
The name: A scout is a youthful explorer, and we consider ourselves explorers of creating excellence in food and service while being playful …,” says Parker.
The vibe: Playful but high end and rooted in the materiality of the region, with reclaimed Douglas fir wood tables, cream linen drum shades and upholstery in mix-and-match wool plaid fabrics.
What to order: Trout with smoked artichoke cream, braised artichokes and clams ($25).

THE NEST
Downtown, Thompson Hotel | 110 Stewart St.
The name: The Nest is about being at the top of the tree … where we nurture and feed you, Parker says.
The vibe: A little bit of Hollywood on the Thompson Hotel rooftop. (Ages 21 and over.)
What to order: Tableside oysters with a crisp Washington rose.

These three open in August

POULET GALORE
South Lake Union | 513 Westlake Ave. N
The name: A cool name with a James Bond reference, says Henderson.
The vibe: Like a market in Paris with the perfectly cooked rotisserie chickens to go.
What to eat: A whole, half or quarter chicken with kicky chimichurri sauce and crispy chicken-roasted potatoes.

VESTAL
South Lake Union | 513 Westlake Ave. N
The name: A Roman reference to the hearth, which, to Henderson, means home. This place [is] my home base, where Ill be cooking, he says of the 49-seat restaurant. Hell cook here three nights a week.
The vibe: A masculine, midcentury-modern living room with walnut paneling and a 350-year-old Douglas fir stump fashioned into a hostess stand.
What to order: Ricotta gnudi with roasted pork broth, hazelnuts, sorrel and Washington truffle.