Cooking for a Crowd at Allrecipes 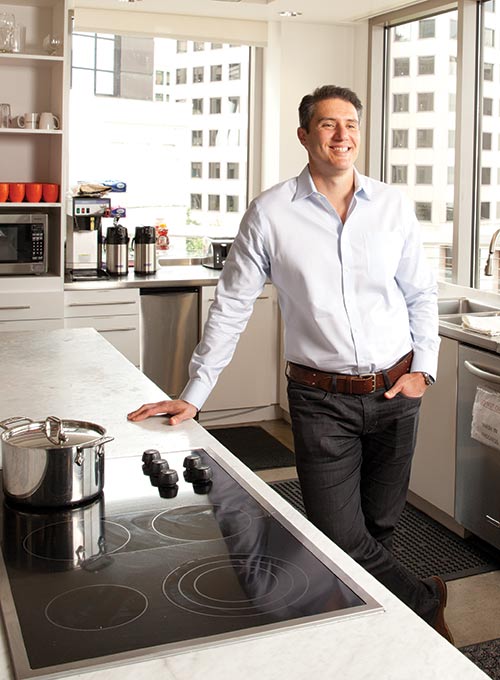 Theres something in Seattles water a vitamin, perhaps that nourishes food-related endeavors. UrbanSpoon, a popular restaurant directory, started here. It went national and was gobbled up twice, initially by IAC Interactive, then Zomato. Sur La Tables first store was at Pike Place Market. ChefShop.com, a retail site for artisan foods, is based here, as are specialty food purveyors Marx Foods and Salumi Artisan Cured Meats. Foodista.com, a recipe site for earnest foodies, was launched in Seattle in 2008. Serious Eats and Roadfood, two more sites for food professionals and thoughtful hobbyists, are now run from a home office on Mercer Island. Housewares purveyor Chefn Corporation is also based here.

And then theres Allrecipes, launched in Seattle 18 years ago by internet entrepreneur Tim Hunt and five friends as a way to trade cookie recipes, an early instance of a user-generated-content (UGC) site. None is any longer involved in the company, which became part of Readers Digest Association in 2006 and was acquired in 2012 for $175 million by powerhouse publisher Meredith Corporation (Better Homes and Gardens, Martha Stewart Living and a full stable of food, family, home and lifestyle magazines).

Readers have contributed 250,000 recipes to Allrecipes, placing it among the top 500 websites worldwide. And, boy, does it know what the world is about to have for dinner. At the Seattle headquarters opposite Westlake Center, you can track the activity on 19 Allrecipes websites in 13 languages across 24 countries. The company administers the international sites from Seattle, thanks to the polyglot pool of native speakers lured by the tech industry.

Now, you could say that these are self-fulfilling prophecies, that cooks with the inclination to look up recipes are more savvy than most, and that trends like eating healthier are nothing new. But its hard to argue with the data provided by hundreds of millions of visits. This sort of information is catnip to companies targeting the worlds kitchens, and the $300 billion spent on food (and kitchen gadgets) by Allrecipes users. Allrecipes ad revenues have doubled in the three years since Meredith took over, by the way.

But the internet is changing. In an age of Facebook and Twitter, of iPads, broadband and wi-fi, a simple bulletin board is no longer enough to draw and hold readers. Meredith, which has revived a dozen legacy magazines, understands all too well the need to retool in order to reengage its audiences, both in print and online. Two years ago, it launched a print version of Allrecipes, and this past September it essentially reinvented the website itself, leaving behind the content-heavy bulletin board in favor of a more engaging and visually attractive social community where the user is star of the show.

This shift didnt come easily, but the investment is worth it, says Stan Pavlovsky, the president of Allrecipes. We build the technology, he says of his Seattle staff, some 225 in editorial, tech, marketing, ad sales, but the cooks build the brand.

Two-thirds of the visits to allrecipes.com now occur via smartphone or tablet. Half a million times a day, roughly, the hungry, the curious or the desperate open the app, and what theyre finding is a sophisticated new site, re-imagined and rebuilt. Its no longer simply a collection of recipes but a platform that combines the personal and social elements of Facebook with the commercial responsiveness of Amazon. It may not be immediately apparent if youre not a regular user, but Allrecipes is no longer simply a recipe collection but a food-focused social network that provides information sharing and validation, tracked on a cooking graph that anticipates a users needs and interests.

And theres advertising, because without that revenue, well, Allrecipes might be all gone. Type in chicken today and a half-dozen advertisers compete for your attention: retailers like Target and Kroger, packaged-goods manufacturers like Foster Farms and Goldn Plump, as well as purveyors of supermarket butter and flour. The new site knows everything about you: where you live and where you shop, if youre gluten free (in which case you wont see the ad for flour), whos in your family (toddlers? picky teens?), what you cooked last week, even what the weathers like should you be thinking of firing up the barbecue. No longer does a recipes illustration feature only the idealized finished dish. Youre going to see videos of unfamiliar dishes prepared beginning to end by real cooks.

What are the criteria for a recipes success?
Did my family eat it? (as opposed to tears and complaints).
Did it incorporate fresh fruits and vegetables?
Did it come in under budget?
And, perhaps above all, Did it contribute to the users personal brand, to her personal creative outlet?
Just read the comments, from positive to negative:
My finicky husband ate every bite.
I tried making this dish with skim milk instead of heavy cream and it had no taste.
I added …,
I substituted …,
I left out ….
Are they disappointed if they failed? On the contrary, theyre empowered.
When they have finished, Allrecipes cooks are encouraged to click the Did you make it? button. Yes, they say, we did make this.
And then, like true kitchen heroes of the social media age, they upload a photo.

Recipe sites like Allrecipes always see a big spike around the holidays as nervous cooks and bakers check on details for Butterballs, stuffings and desserts. A couple of years ago, the site featured a step-by-step video on the preparation of a multicourse meal that included the recommendation for a midafternoon break and a glass of wine. This year, Allrecipes expects 11 million visitors across desktop and mobile devices on the day before Thanksgiving.

The most popular appetizer in the western states, New England and Florida is stuffed mushrooms. In the Great Plains, its cheese balls. Pennsylvania goes for pumpkin dip. The stuffed mushroom states also swear by apple pie, while, not unexpectedly, its sweet potato pie in the South. The Midwest goes for pumpkin, while Texas prefers to end the meal with pecan pie.

One variation or other of a green bean casserole ends up on virtually every table in the country except for Texas, which tends to serve some sort of rice casserole. Nearly everyone goes for mashed potatoes, except Louisiana (au gratin). The Allrecipes favorite is called The Best Mashed Potatoes and calls for Yukon Golds, butter, cream cheese and Parmesan.

Its in the stuffing where Allrecipes sees the greatest regional variations. Western states and New England prefer a traditional sausage dressing. Cornbread is the choice of the southern tier from New Mexico to Florida, while theres a band of states across the heartland, from Utah to Pennsylvania, which prefers straightforward bread-and-celery stuffing. The Plains states, along with Idaho, go for a mushroom filling. There are variations, to be sure, the most popular of which would be the addition of oysters to the stuffing. At the first feasts, going back some 400 years now, bivalves were plentiful in coastal waters, while fowl was a mealtime extravagance. The oysters would have been added almost as filler.

Gravy? A touchy subject. Make ahead (with turkey wings, perhaps?) or last minute (great drippings, but risk of lumps?), theres no easy answer. In fact, lumpy gravy is the number one cause for calls to the Allrecipes help line. Adding canned soup or a powdered mix is sort of cheating, but adding mushrooms is OK. Giblets, yes or no? Up to you.
………………………………………………..

Its midafternoon in Lincoln Village, a bedroom community west of Columbus, Ohio, and Marie N. has a moment to herself. She eyes the late-summer zucchini on the kitchen table and notes that, in the fridge, the chicken breasts she bought at Kroger are approaching their use-or-freeze date.

She fires up her iPad, opens the Allrecipes app and logs into the hive mind of 100 million fellow users to ask what she should do about dinner. At precisely 5 p.m., a daily newsletter drops into the in-box of Allrecipes 10 million subscribers: I have chicken and zucchini. … Hit me with your best shot for supper, reads Maries query.

You can imagine the sense of bewilderment (or the panic and confusion) faced by members of the Allrecipes community: a home cook responsible for feeding a husband and kids. Chicken is the number one search term, garnering some 100,000 queries a day. Within minutes, suggestions start popping up. Trying to avoid gluten, Marie finds a recipe that uses corn flakes instead of flour as a crust for the chicken breasts, which go into a baking dish along with zucchini slices, onion powder and a can of cream of mushroom soup.

Its not gourmet by any stretch of the imagination, but it hits the spot.