Bruce Cazenave Gets Nautilus Back in Shape 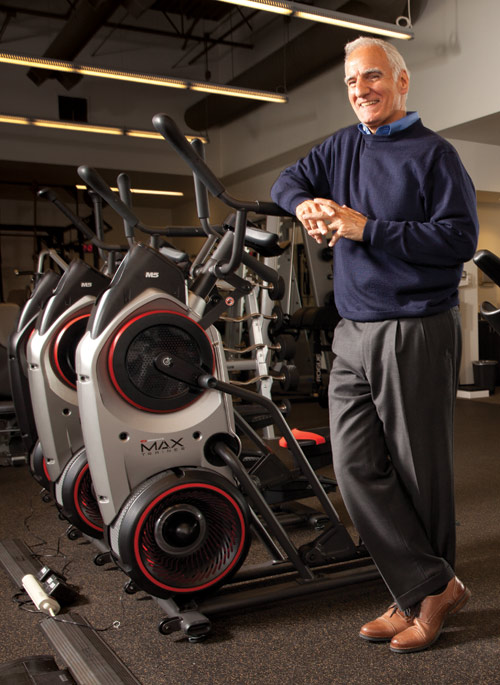 Nautilus Inc., the Vancouver, Washington, company known for its array of home gym cardio and strength exercise equipment, is back and pumping iron.

In the first quarter of 2015, sales hit $96.23 million, up 34 percent from the year before on earnings that soared 87 percent to $10.73 million on the back of such hot-selling products as the Bowflex Max Trainer and its newly engineered smart dumbbells. This year, analysts expect the companys sales to hit $327 million, double what they were in 2010.
As this story went to press, Nautilus stock price was flirting with $22 a share, up from a little more than $2 in 2011, when CEO Bruce Cazenave took over and launched an overhaul of the then-struggling business.

Cazenave is now aiming for a bigger piece of the $3.6 billion annual consumer wholesale fitness equipment market in North America while entering such new categories as sport clothing and the $60 billion weight-loss industry.

Opportunities for Nautilus are being driven by demand domestically and internationally from time-strapped, health-conscious consumers, aging but active baby boomers and millennials who are into self-tracking interactive fitness technology, says Cazenave. With the companys coffers full, Nautilus is also in a position to buy back stock or make acquisitions.

Analysts who follow Nautilus like what Cazenave is doing. Bruce has operating discipline, a clear strategy and he sees opportunities in the retail market for the companys best brands, Nautilus and Bowflex, says Andrew Burns, an analyst with D.A. Davidson Companies, a Portland financial services business. Hes clearly someone you want to work for.

Cazenave, 60, is reluctant to take credit for the Nautilus recovery, calling it a team effort. But his experience at such firms as Black & Decker, Campbell Soup Co. and Timberland helped him recognize the potential in the Nautilus product pipeline and its iconic high-quality brands. Cazenave first asked his Nautilus employees, Where do we go from here? He then took steps to get new products to market more quickly, put more money into research and development, and went after more retail sales as opposed to direct sales, where the company had focused its efforts.

He relocated Nautilus Vancouver headquarters from what some called a three-story, 500,000-square-foot Taj Mahal to a more efficient 52,000-square-foot building nearby. And he increased the workforce from 300 to 340.

By fall 2013, Nautilus had introduced a line of Schwinn cardio fitness equipment, followed in 2014 by a Nautilus cardio line. The Bowflex Max Trainer hit the market in December 2013, targeting the elliptical and stepper exercise markets. Last year, two treadmill products launched under the Nautilus and Schwinn brand names. All are equipped with what Cazenave calls neck up console features using Bluetooth smart connectivity and exportable goal-tracking technology.

Nautilus is among the first fitness product companies to support Apple HealthKit, which consolidates all of a persons health-related apps monitoring activity, blood pressure, etc., into a single place. In March, the company announced that the Bowflex Max Trainer will support Google Fit, an open health-tracking platform. Both products are now sold with apps that allow users to track on their smartphones their personal health information such as weight along with performance such as users heart rate. The intersection of technology, connectivity and rising consumer health interest has significant potential for his company, Cazenave says.

Today, Nautilus focuses on two market segments in the home-use equipment sector: direct and retail. Two-thirds of its sales continue to be direct to consumers, even though it abandoned late-night infomercials long ago. Direct sales are now driven by two-minute television ads showcasing personal success stories as well as by website placement and catalog ads. Last year, Nautilus direct sales rose to $176 million, up from $137 million in 2013, or 16 percent.

Meanwhile, retail sales are expected to increase through a growing roster of partners such as Sports Authority, Dicks Sporting Goods and Walmart. Retail sales last year climbed to $93 million, up 21 percent from the year before.

For all of its long history and recent success, Nautilus still claims only 3 percent of the North American wholesale consumer fitness equipment trade. When I came to Nautilus, it was clear that the company has a huge brand but should be much bigger in the marketplace, Cazenave says. We began asking what consumer demands the company could fill. From that, we started a Consumer Insights Group and realized that people are trying to achieve goals related to fitness, weight loss and health. Why shouldnt we be involved with all of that?

Thats what Cazenave says will keep him at Nautilus even though most turnaround CEOs move on in a few years. This is the first time in my career where I am really engaged and enjoy the products and what they do for people, he says. Im here to stay for the duration.

To enhance its brand names and innovative equipment, Nautilus hosted a Sweat & the City event in New York City last fall that included ringing the opening bell at the New York Stock Exchange. The company debuted new products as well as a Bowflex fitness nutrition line. Nautilus is spending more than $40 million a year on television and magazine advertising. It also uses social media such as Twitter and Facebook to reach consumers.

This year, the company is opening a 450,000-square-foot distribution warehouse in Columbus, Ohio, to serve East Coast customers better. It is moving R&D operations out of its Vancouver headquarters into 30,000 square feet of new space across the street that will include a lab and a retail store. A $15 million share buyback program is in the works. There is a potential for stock dividends.

Cazenave sees Nautilus revenue rising another 15 percent over 2014, with a target of $320 million. Before, the company had been looking for that home-run product, he says. Theres been a philosophical change here in that a double can turn into a home run. The idea is to get the products flowing.

Analysts also expect sales to move higher, but not at the dramatic pace Nautilus enjoyed in 2014, when revenues climbed by more than 25 percent. We see double-digit annual growth, which speaks to the companys power to innovate on the product side and to gain market share on the retail side, Burns says. We think theres a huge opportunity with products for the retail market targeting consumers who dont have time to go to a gym but have space in their house for machines with a smaller footprint.

Key drivers will be consumer demand for new products, international market growth and retail sales expansion. Analyst Ian Corydon, codirector of research at B. Riley & Co. in Los Angeles, says future Nautilus market growth does have challenges. This is a crowded market and can be faddish, Corydon notes. Retail floor space [for equipment display] is not really growing.

But, he adds, after years of bad management, Nautilus is on a healthy path. He notes that Cazenave took out costs, right-sized the company and came out with new products that have been well received.

Cazenave says he faces some challenges. A big one is finding enough mechanical engineers to take Nautilus exercise equipment ideas from sketchpad to manufacturing design. Innovation is so important, he says. … You have to earn your slots.

And as the company becomes more diversified through acquisitions and expansion, he says it will be important to hold on to the continuous feedback culture he has inspired. It will be more challenging to build that culture into all operations, especially if we go international, he says.

Meanwhile, Cazenave is proud that the Bowflex Max Trainer won an international design award and that Nautilus is recognized as one of the Top Workplaces in the Portland-Vancouver area. The recognition fits with what Nautilus is shooting for. We want our products to be approachable and usable, Cazenave says. Communication is a key part of that with both employee and customers.