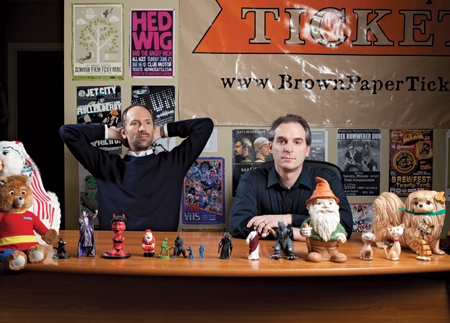 In many ways, what Brown Paper Tickets CEO Steve Butcher and CTO William Scott Jordon are attempting is a Sisyphean affair at best.

Dethrone Ticketmaster? Fat chance. It grossed $372 million in the fourth quarter of 2009 alone, providing tickets on a global scale for just about any major act coming to a town near you. Ticketmaster is so huge now, it focuses only on big game: the U2s, Rolling Stones and Kenny Chesneys of the world. This is the same company that practically doubled in size in 2009 when it announced a merger with its closest contender, Live Nation, making it the largest promoter/ticket-seller in the world.

But thats not what Butcher wants. While Ticketmaster, in the wake of that megamerger, zeroes in on Mick Jaggers lips, Brown Paper Tickets, a company of close to 70 employees, is gleaning the remnants and launching a creative online offense.

When the Department of Justice was doing research for allowing the merger, they called us and we spoke to 35 lawyers at one time, Butcher says from his office in Fremont. They asked what we thought, what we anticipated. At first, we thought it would be a big, powerful company, but on the other hand, it was a strategic retreat for them.

Ticketmasters decision to merge actually helped shape Brown Paper Tickets business plan. Butcher knew that if the merger went through, his company would have the selling advantage with club owners using Ticketmasters competition for ticketing. The angle? Charge a smaller service fee, which would leave millions of dollars a year in the pockets of ticket buyers and event producers, Butcher explains, embracing the notion that ticket buyers would use that leftover cash to pay for more shows.

While Ticketmaster locked up the regnant stadium events, Brown Paper began scooping up smaller shows. Lots of them, ranging from shows in midsize theaters to, quite literally, home events. One customer on Long Island went through Brown Paper to service regular dinners for eight. That range, Butcher says, has allowed Brown Paper to open up a market that didnt exist before, where smaller venues are afforded a platform from which they can broadcast their eventswithout having to attach excessive service charges.

One of Brown Papers priorities was to reduce those sizable service charges most customers have simply gotten used toironic, considering it now takes a nanosecond to produce a ticket for a customer online. Yet the charge is still there and increases in accordance with the price of the seat. Want a floor seat to U2 at Qwest Field next summer? Thatll be $253.50, please, not including Ticketmasters $23.55 service charge. Nosebleed seat? Add $5.95 to the $33.50 ticket. Watching the Broadway smash Wicked in an orchestra seat at the Gershwin Theatre in New York City will set you back $262.25; the service fee is $11.

Brown Paper, in fact, got into the ticketing game in 2000 because of what it considered high service fees. The new firm wasnt alone. Six years prior, Stone Gossard and Jeff Ament of rock giant Pearl Jam tilted against the Ticketmaster windmill, speaking before Congress and labeling the ticketing giant a monopoly. Pearl Jam even went so far as to attempt the ticketing for its own shows at venues where Ticketmaster had exclusive deals, such as KeyArena. By controlling those venues and associated promoters, Ticketmaster had left most bands without any meaningful alternative for distributing tickets, Gossard told Congress.

I loved what they tried to do, he notes. It was especially risky for a band to come out from behind the curtain and say, This part of the business isnt working for us. We want to improve it, especially the services fees. Brown Paper charges a 99-cent flat fee (plus 3.5 percent of the face value of the ticket) for all events it tickets. Though the figure is comparatively small, its a revenue stream that continues to grow. In the companys 10-year history, it has averaged 250 percent growth annually, discounting the first two years when it saw almost four-digit growth, according to Butcher.

Compared to the flash of Ticketmasters website emblazoned with dynamic features and the faces of the famous, Brown Paper is subdued and simple. There are no ancillary ads or pop-ups. Instead, it has a utilitarian Craigslist feel, which, Butcher says, makes it easier to use with a smartphonewhich is what hes is counting on. You get a lot more clicks per purchase and efficiency of checkout, Butcher explains. We dont want to get in their [customers] way.

And so far, the company has steered away from apps. Butcher says Brown Paper didnt want to create something people would have to download to use, hoping the simplicity of the site itself would suffice. Still, in January, the company unveiled the most extensive upate to the website interface in ten yeasmaking it more socially interactive and with added server capacity to handle on-sale spikes.

The next phase of the ticketing industry, Butcher says, is event discovery, making those who might be interested in attending something aware of an event in the first place.

That aspect, he says, will be achieved through linking to social networks, such as Twitter and Facebook so that producers can create communities around events, which can lead people to Brown Paper.

Mobile ticketing is on Brown Papers radar, too. Its possible for event producers to use a smartphone as a ticket scanner and for buyers to distribute purchased tickets by smartphone through Brown Papers Transfer-to-a-Friend technology.

The whole point is to get the tickets into the hands of the people who will be the loudest earliest, Butcher says. Thats your best marketing.

But Ticketmaster isnt taking any of this competition lying down. The giant has overhauled its website, adding more social networking capability and individualized tables, such as a Facebook gadget, seat-specific ticketing so you can sit near friends (you know theyre attending because the Facebook gadget informed you), fan reviews and previews.

While Brown Paper is determined to incorporate social networks into its growth strategy, Butcher was quick to add he doesnt want to do anything that would compromise customer privacy, an activity that might lead to a viral exodus.

There are lots of things that allow people to be touched by the producer, but weve always wanted to honor peoples privacymore than people even wanted, which is a little old-fashioned in that respect, Butcher says. We give ticket buyers the power.