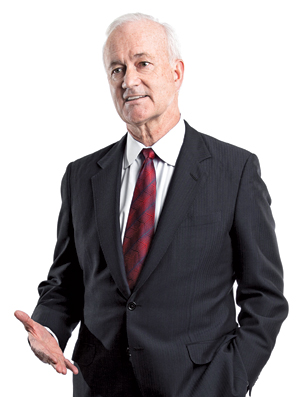 Although Gubby Barlows family had lived in South Africa for several generations, Barlow felt uncomfortable with his countrys apartheid policy. So, in 1987, he asked his employer, Deloitte Touche, to transfer him to the United States. From accounting, he went to various management positions in health-care companies before joining Mountlake Terracebased Premera Blue Cross in 1997. First as COO and later as CEO, Barlow has led a drive to strengthen Premeras balance sheet. Now he wants to help drive down health-care costs.

Childhood in South Africa: Team sports are a very important part of your school experience through middle school. You were expected to participate, and that promoted teamwork. When I became CEO of Premera nearly 12 years ago, I introduced our 12 leadership values. Teamwork is one of those values. Every company says that, but the emphasis on teamwork here is pretty strong. People are assessed against that by people who report to them and by those they report to.

Nonprofit status: In the early 2000s, we were very capital constrained. We filed to go public in 2002 to raise capital [to invest in information technology and other needs]. If that had worked out, we might have also made some acquisitions. It didnt work out, but weve found a different way to be successful. We made the necessary IT investments and our balance sheet is much stronger now.

Efficiency: Even though we dont have the scale we would have had with acquisitions, our administrative cost as a percentage of premiums (if you include our business with customers who are self-insured) has dropped to 7 percent in 2010 from 9.4 percent in 2004. We have adopted the Toyota lean production system to take cost out of the system. Weve focused particularly on our claims and customer service area, improving the way we answer phones and cutting waste by reducing errors. The number of people involved has fallen to 720 from 920. Since those people are dealing with a lot more transactions, the cuts represented a 30 percent decline in cost.

Health-care costs: The wrong incentives are in place. Physicians and hospitals are rewarded for volume as opposed to outcome. We now have a pilot project with Swedish [Medical Center] for the popular medical home idea [where we pay the hospital a set fee for primary-care needs]. And were working with accountable care organizations. The idea is that hospitals and physicians get together and are paid a premium to deal with all of a patients needs. The healthier they keep their patients, the better off they are. We have this arrangement with The Polyclinic. We look at their costs compared to their peers. If they do better, we share some of the savings with them.

Other savings: In advanced imaging, weve engaged a vendor to help set protocols for when an image is needed, to avoid ordering unnecessary tests. It could have a dramatic impact. Weve also put in a 24-hour nurse line where members can get [off- hours] advice that might range from just Take an aspirin to Go to the emergency room. We have a pilot [program] with a company that will even send a physician to the customers home. The goal is to keep the patient out of the emergency room, where the costs are very high.

Patient Responsibility: The Centers for Disease Control estimates that 75 percent of health-care spending goes to such chronic conditions as diabetes. If patients took better care of themselves, we could save about a quarter of those dollars. We have introduced online tools that allow members to take health assessment tests. They can also print out a copy of their electronic medical records to show their doctor.

Risks of Reform: There will be an influx of 3 million to as many as 60 million previously un-insured people coming into the system nationwide. Soon we are going to have to take all comers. The risk is that you get a disproportionate share of the high-risk people. The other risk is that, since the system subsidizes individuals, employers may drop their health plans and give their employees money to sign up for individual plans.

Single-payer alternative: There is no strong evidence that single payer works except that it suppresses costs by reducing access to care, including high-cost procedures. In this country, if you have insurance, you have access to care that is the best in the world. Medicare is single payer, but they pay less than the actual cost, so 10 percent or more of the cost is shifted to the private sector.

A promising future: The most promising part of health reform will come from comparative effectiveness research. An aspirin might be better than a new high-cost drug, but that drug might still be approved by the Food and Drug Administration because its not supposed to take cost into account. If something is only marginally better but costs 100 times more, how do you balance that? We need to find out what is the most effective treatment and then provide safe harbor so that physicians, hospitals and insurers who follow that treatment dont get sued if there is a bad outcome. There also needs to be tort reform. Doctors will tell you informally that [to avoid lawsuits] they will give patients a battery of [unnecessary] tests. Why take the risk?