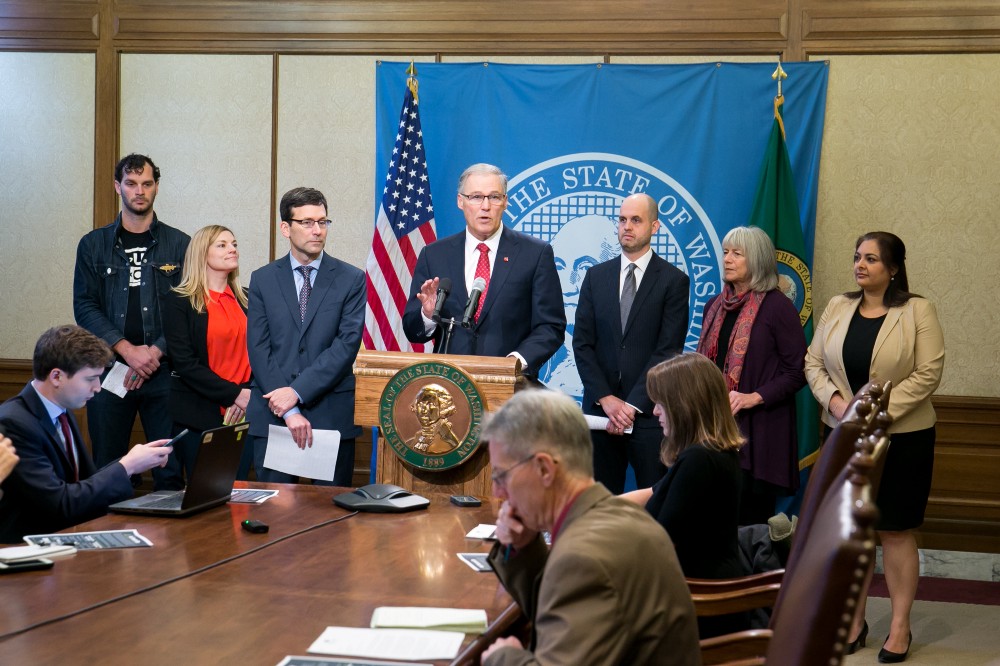 Washington Governor Jay Inslee, Attorney General Bob Ferguson and other state legislators and business leaders announced that Washington would seek to preserve an open internet on the state level if the Federal Communications Commission votes to undo the nations net neutrality rules.

This would make Washington state the first in the nation to pursue a state-level solution to address this issue.

The FCC voted today to repeal net neutrality rules. The vote was 3-2.

IT IS OFFICIAL. FCC Dismantles Net Neutrality in 3-2 Vote, In Huge Win for Telecoms That Hands Them Power to Change Consumers’ Internet Experience: https://t.co/Zp5uHLeTWh

Following the vote, Ferguson announced that a lawsuit is coming to challenge the decision. His statement said:

“Yesterday I sent a letter to the FCC asking them to delay their vote gutting net neutrality. Unfortunately, they did not. Today, I am announcing my intention to file a legal challenge to the FCCs decision to roll back net neutrality, along with attorneys general across the country. We are 5-0 against the Trump Administration because they often fail to follow the law when taking executive action. There is a strong legal argument that with this action, the federal government violated the Administrative Procedure Act again. We will be filing a petition for review in the coming days. Allowing internet service providers to discriminate based on content undermines a free and open internet. Todays action will seriously harm consumers, innovation and small businesses. I was proud to stand with Gov. Inslee yesterday when he announced that Washington state will step up to protect consumers in light of this disappointing federal action. I commend him for his leadership and look forward to continuing to work with him to that end.

In a post on Medium, Inslees office said, While the FCCs vote will preempt states from ensuring full net neutrality, there are a number of steps that can be taken at the state level to promote an open internet and strengthen protections for consumers.

Inslees proposal would include pursuing the following actions, it said.

Hold companies to their commitments not to block websites, throttle speeds, or impose prioritization pricing

Hold companies accountable for warranties made to consumers

Inslee wrote a letter expressing concern with FCC Chairman Ajit Pais plan to repeal net neutrality last week, saying Net neutrality principles ensure large corporations are never in the position of deterring innovation, obstructing entrepreneurship or disenfranchising citizens. They are essential to preserving the very foundation of the internet as we know it, while enabling digital innovation in Washington State and across the country to grow unbridled by corporate interference. Unfortunately, the Commissions draft order undermines these core principles and for the first time allows broadband providers rather than the marketplace to pick the winners and losers in the 21st century economy.

Inslee was recently elected chair of the Democratic Governors Association. It remains to be seen if the other 15 states with Democratic governors will follow Washington states leads.

While the @FCC will throw down roadblocks, Washington will be the first state in the nation to proactively protect net neutrality, and we’re going to use every tool in our toolbox to do so.

UPDATE: Seattle Mayor Jenny Durkan also issued a statement condemning the FCC repeal of net neutrality regulations. Her office said that on the city level, “Seattle must be ready to protect the internet,” with Mayor Durkan preparing to “direct all City departments to work with the City Council to draft an ordinance to create legal protections that ensure all Seattle residents receive open and equitable access to the internet consistent with their experience under Obama-era regulations,” if efforts at the state level are unable to protect net neutrality.

See the full release below:

SEATTLE (December 14, 2017) Seattle Mayor Jenny A. Durkan condemned the Federal Communications Commission (FCC) vote rolling back Net Neutrality regulations. Following this 3-2 vote, carriers will now have the freedom to slow down or block the delivery of information over the internet unless customers pay more. Last week, Mayor Durkan joined 68 Mayors across the country in signing a letter to the FCC in opposition to the Restoring Internet Freedom Draft Order. Earlier this year, the City of Seattle has launched a site highlighting the Citys support for net neutrality.

The FCCs irresponsible and reckless decision weakens our democracy. Our City and state are committed to fighting this decision and will be taking action to protect fair and open access to the internet. In the weeks and months to come, I will be working with the City Attorney, Seattle IT, the Council, and others to examine steps our City can take to maximize the principals of net neutrality and protect online freedoms. It is critical our City is working to ensure the freedom of the internet is not controlled by service providers, especially as we bring 5G service online, said Mayor Durkan.

By Seattle holding firm to our beliefs, that all residents deserve fair rights to the internet, were sending a clear message, said City Council President Bruce Harrell (District 2, South Seattle). Fair and equal access to the internet help pull people out of the digital divide and allows them to better their lives.

I believe that in todays world, everyone should have access to the internet and all of the resources it provides. By working to close the digital divide, we reduce economic disparities experienced by many of our low-income, disabled, and community members of color. We will continue to work to ensure that all Seattle residents and businesses have access to unrestricted, affordable internet through all the tools at our disposal, including consumer protections, local regulations, or public infrastructure so that the opportunities provided by the internet are shared equitably by all. said Councilmember Rob Johnson (District 4, NE Seattle).

Mayor Durkan is committed to ensuring internet service providers who operate within the City of Seattle and whose infrastructure occupies the public right-of-way uphold the principles of net neutrality and not block or throttle lawful content, discriminate against lawful traffic, or engage in paid prioritization.

Mayor Durkan is hopeful the state mandates net neutrality, but Seattle must be ready to protect the internet. Thus, she will also direct all City departments to work with the City Council to draft an ordinance to create legal protections that ensure all Seattle residents receive open and equitable access to the internet consistent with their experience under Obama-era regulations.