The presidents threats and proposals could have far-reaching effects here, but Seattles mayor remains defiant. 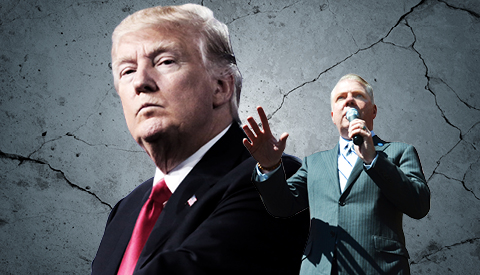 Im willing to risk losing every penny of federal funding to stand by our commitment to protect everyone in our community, declared Seattle Mayor Ed Murray on March 27 in response to threats by President Donald Trump and U.S. Attorney General Jeff Sessions to withhold all funding from so-called sanctuary cities. According to the mayors office, every penny equates to more than $150 million in operating and capital expenses in 2017 alone.

Even if the city wins its lawsuit, and there are strong arguments in its favor, there is another fiscal sword of Damocles hanging overhead: Trumps skinny budget proposal slashes appropriations for dozens of domestic programs that feed money to cities. Federal transportation, housing, environmental, education and law enforcement funds are just some of the revenue line items that are built into Seattles city budget and are at risk.

The presidents policy pronouncements beyond the budget are equally worrisome for the city, as he tightens borders, embraces trade protectionism, abandons efforts to address environmental issues and backs away from police reform all issues that affect the local economy. Seattles business leaders clearly have much to worry about under a Trump administration.

Dozens of local transportation projects would lose critical funding, including the much-delayed Lander Street overpass in the SoDo industrial district, the Center City and Broadway streetcars, and bridge repairs and replacements. Grants for street maintenance and improvements would also be cut. Seattles Office of Housing, the Human Services Department and the Department of Parks and Recreation would lose millions of dollars of funding from the discontinued HOME affordable housing program, Community Development Block Grants and the weatherization assistance program.

Seattle Public Schools received nearly $53 million in federal grants in the 2016-2017 school year to support special education, food services, support for disadvantaged students and more than a dozen other programs.

That could be one of the most devastating areas, in education, says Seattle City Council President Bruce Harrell. The effects may not be as immediate because so many employers may need to go outside the state to get the talent they want, but in five to 10 years, the deficiency in the talent pool may be exacerbated with the lack of funding.

The Port of Seattle is expecting $188 million during the next five years for airport capital projects, as well as support for its Terminal 46 modernization plan through the Transportation Investment Generating Economic Recovery (TIGER) grant program that Trumps budget eliminates. Also on the cut list: FEMA earthquake preparedness, substance abuse treatment and homelessness programs.

Its worrisome, says Maud Daudon, executive director of the Seattle Metropolitan Chamber of Commerce. Transportation, Id say big, big impacts. And the environment: The Puget Sound Partnership got zeroed out. Its an economic issue for our fishing industry. Daudon also highlights the negative impact to Seattles ability to address its homelessness crisis: The Seattle Housing Authority would lose $24 million. And it eliminates the U.S. Interagency Council on Homelessness. … Thats added enormous value to our region.

While Trumps budget preserves the Pell grant program for college students, it cuts research grants from several federal agencies. According to the Chamber of Commerce, $894 million of life sciences research grants to Seattle area organizations would be wiped out, about half of which goes to University of Washington and $247 million to the Fred Hutchinson Cancer Research Center. We are making incredible progress in the community on cancer research, Daudon argues, and this is not the time to pull back.

Trumps trade protectionism will no doubt be felt locally, especially if he provokes equally protectionist responses. According to the city, the Seattle region is the third-largest exporter in the United States, with $67.2 billion in goods being sold abroad. Boeing and Microsoft make up much of that tally, but Seattle also depends heavily on tourism from countries like China. The presidents crackdown on immigration will not only affect the local workforce New American Economy estimates that there are 619,00 immigrants, including 150,000 unauthorized, in the Seattle metropolitan area but it will affect the local tourism business as well, since international visitors accounted for 17.3 percent of total visitor spending in Seattle in 2015.

At a time when the Seattle area is doubling down on an urban planning framework focused on transit-oriented development, with major investments in housing density near mass transit stations, the federal government now looks to be shifting its emphasis away from both by de-emphasizing (and defunding) HUD and pushing transportation funding responsibilities down to state and local jurisdictions.

While the situation looks bleak, many doubt that the president can make such changes at this scale. It has been said of White House budget plans, The President proposes and Congress disposes, since the legislative branch holds sole constitutional authority to write the budget while the executive branch cannot withhold funds that Congress appropriates. Legal experts also doubt that Trumps sanctuary city crackdown will stand up in court.

Its also too early to predict whether the new Trump administration will find support for its policies in either the legislative or judicial branches. There’s a Trump agenda and there’s a Republican legislative agenda, suggests Harrell. They often differ. I believe a Republican agenda could be helpful for Seattles businesses when you look at what they want: a thriving economy and a thriving business environment. But Trump seems to depart from that stance.

Members of Congress, including Republicans such as Arizona Senator John McCain, have also begun pushing back on Trumps foreign policy, and the president has already lost important test cases on immigration in federal courts. There might even be some silver linings for the Seattle area in the Presidents plans. Trump has argued for a new $1 trillion infrastructure program, which might bring new project funding to the region.

What confuses me is that the Republicans support infrastructure projects, and we rely on them, says Harrell. So Im hopeful that Trumps policies wont put those in jeopardy. … We need those funds to support the path that Seattle is poised to go down.

Trump also proposes adding $54 billion to the Department of Defense to increase military capacity; some of that would likely flow to Boeings defense contracting business.

I think the question is whether those things can be delivered upon, suggests Daudon. So far, when you watch the administration and its early days, too early to judge for something as complicated as an infrastructure bill, its unclear whether Congress can get it done. We are big fans of investing in infrastructure, but there are no proposals on the table.

Mayor Murray has instructed his budget office and department heads to prepare contingency plans in case the city does, in fact, lose some or all of its federal funding. New property and/or sales tax proposals may follow quickly to restore the most critical budget items. But, for the moment, these are all theoretical exercises until President Trump follows up his words with actions, and we see what the true impacts are on Seattle.

As for the Chamber of Commerce, Daudon says, Were encouraging businesses to speak up to Congress on issues that are of direct impact to them, and to speak to us if they feel uncomfortable going out on their own. … Most of our messaging has gone to our congressional delegation. Its very early in the administration and were still trying to find avenues of communication to them. But theyre starting to appear.