The council voted overwhelmingly in favor of the proposal, which could bring the NHL and NBA back to Seattle. 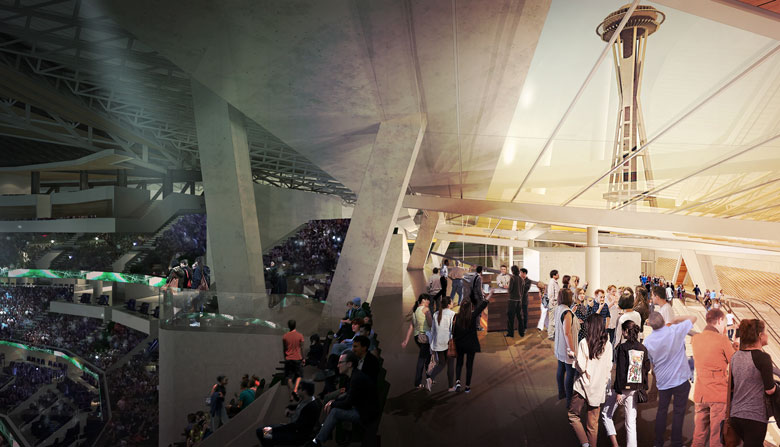 The Seattle City Council has passed an ordinance authorizing the Mayor to enter into a memorandum of understanding (MOU) with Oak View Group (OVG) to redevelop the KeyArena at Seattle Center.

As expected, the vote was 7-1, overwhelmingly in favor of moving forward with the agreement.

The MOU includes a $600 million in private financing for the redevelopment of the arena, doubling its overall square footage, a 39-year lease between the city and OVG, $40 million for a transportation fund, and a Community Workforce Agreement that includes a $20 million community fund, $10 million dedicated to YouthCare.

Construction is scheduled to begin in 2018, with scheduled completion and reopening in October 2020.

This MOU going forward could pave the way for the NHL to come to Seattle as soon as 2020. Council president Bruce Harrell said the NBA is likely to consider expansion as soon as 2022.

The five-year MOU for the SoDo Arena backed by an investment group led by Chris Hansen expired Dec. 3, after the group did not acquire an NBA or NHL team.

Its unclear what the future holds for Hansen and the Sonics Arena group, but theyre not showing signs of stopping their efforts. Investment group member Wally Walker, former player, General Manager, CEO and president of the Sonics, recently called the Dec. 3 MOU expiration an artificial deadline on the Seattle Growth Podcast, and the group posted an open letter on Nov. 17 questioning public subsidies in the OVG proposal.

Juarez, who co-chairs the Select Committee on Civic Arenas, strongly rebuked the SoDo Arena effort in comments on Nov. 16, calling it yesterdays news, saying I voted on that 18 months ago, and I voted No on that. Its done. Its over. Im looking forward. Thats a failed MOU. Thats the past.

What the future now holds, after the council vote, is a plan for significant changes at KeyArena and Seattle Center.

According to Seattle Business magazine media partner SCC Insight, “The city expects to have a draft Mobility Plan in February, a draft Environmental Impact Statement on the arena renovation project in March, and a final EIS in August. The permitting process for the arena will also move forward in parallel, and hopefully complete in time for demolition to begin next October.”

Mayor Jenny Durkan released the following statement after the vote:

“Ive said consistently that Im committed to bring back our Sonics, recruit an NHL team, and invest in our City. Under this plan, arena construction is 100% privately financed and will provide good family wage jobs for decades to come. Nothing in this MOU precludes other private investors from privately financing other arenas in Seattle, but it does establish a pathway to making Seattle Center vibrant for future generations. I commend the leadership of Councilmember Juarez, Council President Harrell, and Councilmember Bagshaw and look forward to reviewing and signing the MOU later this week.”

The Sonics Arena group responded with an open letter from Hansen, Walker and fellow investment group members Erik and Pete Nordstrom and Russell Wilson, saying “we remain steadfast in our goal to have the NBA once again playing in Seattle, so we will keep the land we own in Seattle’s Stadium District until that commitment has been made.”

The group also says, “We ask the City Council to consider our revised application for a conditional vacation of a one-block section of Occidental Avenue South. We will not break ground on an arena unless a team is secured, so granting the conditional vacation poses no risk to the City and it doesnt impede Oak View Groups arena plans. And if Seattle Center does indeed end up once again being the home for the Sonics, well be right there with you to cheer them on.”

“On behalf of OVG, we want to thank the Seattle City Council, City staff, and City consultants and representatives for the cumulative work that signifies a monumental moment with todays 7-1 vote. We feel extremely good about the partnership between the City of Seattle and OVG and respect and applaud the City in its ability to be thoughtful, collaborative, and deal-focused throughout this process while maintaining the best interest of its citizens.

The process over the last year serves as an example of the transparent public/private collaboration that has led to a great outcome that other municipalities will emulate. We have enjoyed getting to know our neighbors in Seattle Center, Uptown, South Lake Union, Belltown and Queen Anne. We look forward to continuing our work with the community over the next year as we complete our long form agreements and full entitlement. We will continue to be good partners and good neighbors and look forward to a collaborative and beneficial ongoing relationship will all community stakeholders.

While this vote marks another important step in the process, we have work to do. Out of respect to our new leader, Mayor Durkan, and our continued commitment to follow the appropriate process, we will reserve our comments until later this week when we anticipate the Mayor signing our agreement.”

Looking for more on the arena debate? Our December cover story on the issue, written by Art Thiel, is here.