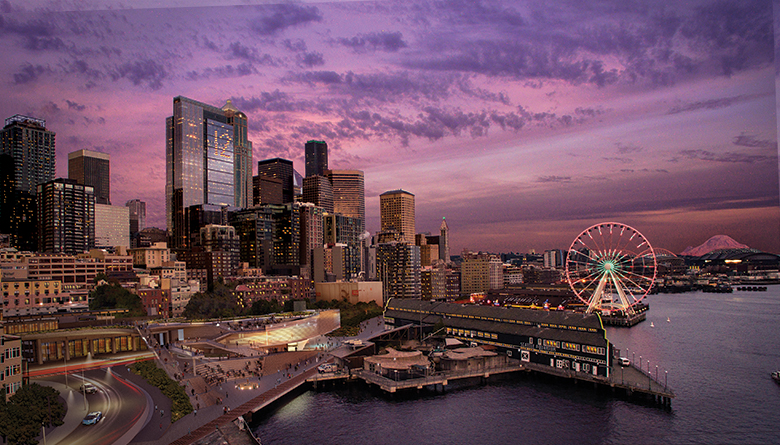 Ultimately, the success of Seattles audacious $711 million transformation of its downtown waterfront will depend on pedestrians.

The city is making a giant bet that the project, likely to be completed in 2023, will boost commercial and residential development and attract throngs of visitors to an area that has historically been isolated by the homely Alaskan Way Viaduct.

The ambitious undertaking stretches from Pioneer Square to Belltown, includes 20 acres of public park space an acre is about the size of a football field and an elevated pathway connecting Pike Place Market and downtown to the waterfront. It includes a rebuilt Elliott Bay Seawall and a $100 million expansion of the Seattle Aquarium, complete with a 350,000-gallon shark tank that will be visible to people walking through the plaza below.

To the south will appear a reconstructed Washington State Ferries terminal and an actual beach, where visitors can walk right up to the water. Along the 26-block length of the project are a protected bike lane, a landscaped pedestrian promenade and public spaces hosting year-round events, from ice skating during the winter to the return of public concerts which ended in 2005 at a reconstructed Pier 62. More than 7 million people visited the central waterfront last year, says Ivars Inc. CEO Bob Donegan, whose flagship restaurant at Pier 54 had to shut down for nearly a year during seawall construction. Consultants told merchants the new waterfront would double or perhaps even triple that number. Combine that figure with the 15 million people who visited Pike Place Market last year, and the waterfront could be teeming with tourists and locals alike.
While that notion doesnt sit well with some condo owners, developers are already taking advantage of new opportunities.

Donegan predicts the waterfront will change the very character of the city.

One of the things Ive looked at in the past to see if a public project is successful is whether the private sector is investing alongside it, Donegan notes. If you look from Alaskan Way up to First Avenue from the stadiums to Pike Place Market, there has been more than $1 billion in private investment over the last four years.

Serious discussions about razing the viaduct began after the 2001 Nisqually earthquake, but civic leaders had bemoaned the rickety structure for decades because it divided downtown and the waterfront district. In a classic case of the infamous Seattle process, it wasnt until 2009 that city, county and state governments agreed to replace the Alaskan Way Viaduct. Three more years passed before the Seattle City Council approved the concept design and strategic plan for the waterfront.

For the first time, we will really connect Pioneer Square, the historic piers, Pike Place Market and the aquarium. They will all be basically part of one parks system, says Marshall Foster, director of the citys Office of the Waterfront, which was established by former Mayor Ed Murray to oversee the program. That is something that doesnt exist today, and it will thread those neighborhoods together, making the waterfront a single, unified downtown district rather than a series of disconnected destinations.

Once the now-closed viaduct comes down in the next few months, Foster says, visitors, residents and downtown workers will no longer have to cross a physical and psychological barrier to walk down to the water. Its going to change the mental map of the city, he adds.

Former Mayor Charles Royer lives on the waterfront and serves on the board of Friends of the Waterfront, the nonprofit created in 2012 to help fund and operate the park. Like Donegan, he anticipates a significant uptick in visitors.

Its probably going to be a different crowd on the waterfront than what you have now, [and] when youve got a lot of people, that will change the retail situation pretty dramatically, Royer says. PLAY SPACE. The rebuild of Pier 62 along the waterfront could include temporary recreation venues soccer, in this case as well as a return to Summer Nights at the Pier concerts

Not all waterfront residents have been so open to the plan. The potential for increased homelessness and the dramatic influx of people have been ongoing concerns.

Royer, who supports more aggressive enforcement of the citys anti-camping laws on the waterfront, says people are worried that the waterfront could open, and the first tents could go up the next day.

Friends of the Waterfront Director Heidi Hughes says her organizations plan to operate and program the park strikes a balance between enforcement and deterrence. To supplement Seattle police, Hughes says, Waterfront Seattle will provide its own ambassadors similar to the Downtown Seattle Associations Downtown Ambassadors who will walk through the park, clean up trash, talk to visitors and provide outreach to homeless residents.
Perhaps more important to the safety and security of the park, Hughes explains, will be making sure every space is occupied and used year-round, a strategy that has already proved successful in Westlake and Occidental parks downtown.

Rather than thinking about the central waterfront as a fallow space where events pop up, there will be all sizes of programming of various scopes and scales, including life-size chess, yoga and tai chi classes, as well as festivals and concerts that draw thousands of people. Last summer, Hughes says, the Friends implemented a small-scale version of this approach and saw arrests and citations drop dramatically. Condo owners also have complained about rising costs. Under the proposed Waterfront Local Improvement District recently approved by the City Council commercial and residential property owners are required to contribute $160 million to help to pay for the cost of public improvements that benefit their properties. At public hearings, condo owners have also complained of potential noise from increased visitors and extra costs.

The city says the typical downtown condo owner would pay about $8 per month, or $96 per year, over 20 years, totaling about $1,900. Typical commercial property owners would pay about $300 per year over 20 years. Other funding mechanisms have the city investing $248 million and the philanthropic community $110 million. In addition, the state of Washington has committed $193 million for the new Alaskan Way to maintain freight connections with the nearby Port of Seattle along the waterfront.

Donegan, who has been actively advocating some version of the waterfront project for 12 years, cites a 1985 University of Washington study that declared the viaduct was vulnerable to an earthquake 16 years before the Nisqually disaster. He notes that Ivars founder Ivar Haglund, whose companys flagship restaurant on Pier 54 is named Ivars Acres of Clams, hired a brass band shortly after the viaduct opened on April 4, 1953, to sarcastically celebrate creating acres and acres of covered parking underneath the structure.

He told the city he wanted it taken down, Donegan says, that people would find themselves in Tacoma or Everett before they knew what was going on.

Even Cary Moon, the one-time mayoral candidate and a longtime waterfront resident and cofounder of the Peoples Waterfront Coalition, has come around. Moon, who lost to Mayor Jenny Durkan in 2017, was an early skeptic of the citys plans to tear down the viaduct and bury its traffic in a tunnel. Although Moon still thinks the city should have spent its money on transit rather than the $3.3 billion tunnel project, she says shes 100 percent psyched about whats happening on the waterfront. Im really proud of the city, Moon says. This plan is really big and ambitious and bold, and the city has stuck with it.

It has been a long time coming. Municipal leaders vision for a new waterfront began with a tremor.

The project to rebuild the waterfront arguably began almost two decades ago in 2001 when the Nisqually earthquake forced the city, region and state to come up with a plan to replace the damaged, seismically vulnerable elevated roadway. Years of debate over how (and whether) to replace it ended in 2008, when Governor Chris Gregoire, Seattle Mayor Greg Nickels and King County Executive Ron Sims decided to send State Route 99 into a deep-bore tunnel, opening acres of new waterfront land for parks, a new Alaskan Way boulevard and private redevelopment.

Years of additional debate ensued. In 2010, after an international competition, the city chose New York-based James Corner Field Operations to design the waterfront park. Local architects and others criticized Corners initial proposal as too grandiose. Corner scaled back eliminating hot tubs, gondolas and floating swimming pools to a plan with a more modest, but still grand walkway, plus flexible spaces for outdoor activities, such as a winter ice skating rink, a mini soccer field and a wide waterfront pathway flanked by hundreds of trees.

We have really learned a lot, and weve gone through a healthy set of iterations and steps to hone in on the right scale to make a really gracious connection and be as efficient and cost effective as it can be, says Marshall Foster, director of the citys Office of the Waterfront.

The parks plan significantly includes ongoing maintenance, which will cost more than $6 million a year about $4.8 million from the city and up to $2 million from the nonprofit Friends of the Waterfront, an organization created in 2012 to help fund and operate the park.