A review has founded a $23 million capital shortfall, bringing the total cost for the project over $200 million. 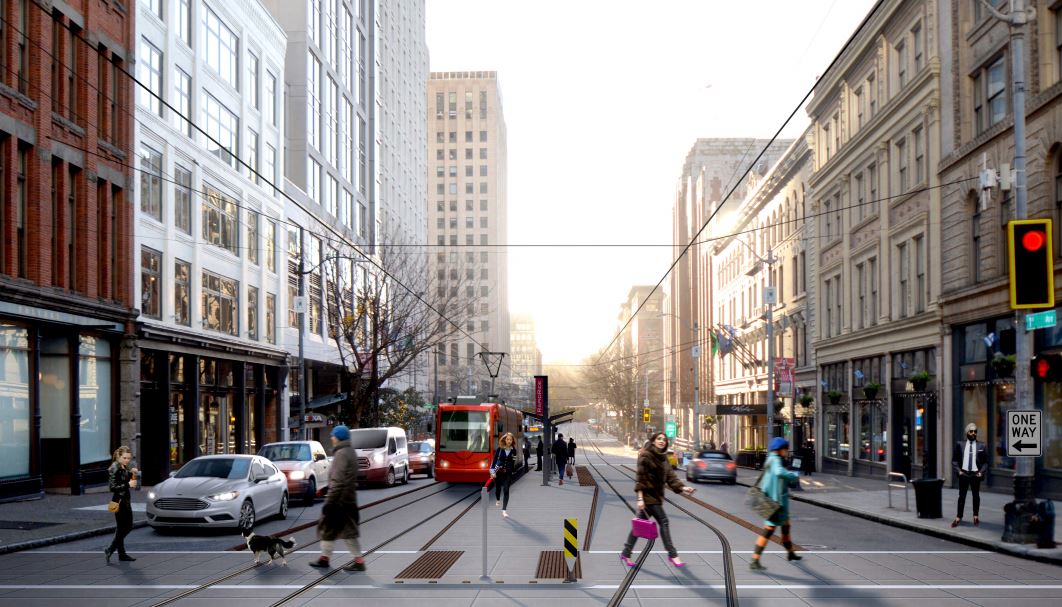 This story was originally published Friday, March 30, on SCC Insight.

Mayor Jenny Durkan announced that she has halted all but one of the ongoing projects associated with the Center City Connector streetcar, pending an independent review.

Two weeks ago, the Seattle Times published an article claiming that SDOTs estimate of annual operating costs are as much as $8 million too low and that SDOT hid that information from the City Council when it was debating the budget of the $177 million streetcar project last fall. In response, Mayor Durkan announced that she would hire an outside consultant to do an independent review of the project to be completed by June. At the March 20 meeting of the Sustainability and Transportation Committee, SDOT Interim Director Goran Sparrman and City Budget Director Ben Noble informed the committee that the investigation would be run by Nobles office, and it would likely take 2-3 weeks to hire a consultant. What that means: the independent review hasnt even started yet, but the City Budget Office has already found enough information to warrant halting the project and potentially incurring other costs for on stopped contracts in progress.

Deputy Mayor Mike Fong sent a letter to the City Council today with an update on the situation.

According to Fong, the independent review will begin next week, but their preliminary financial review has already discovered an additional capital shortfall of more than $23 million bringing the total capital cost of the project to over $200 million. Fong also notes that the Mayors Office is working with the City Attorney to investigate the projects management.

The streetcar project is relying on a $75 million federal transportation grant, which may be in jeopardy if SDOT provided false, misleading, or incomplete information to the U.S. Department of Transportation. The grant may also be in jeopardy if the Mayors hold on the project pushes it out too far and the feds decide to withdraw the grant.

The Council has been hardly unanimous in its support for the project, with Herbold, Sawant, and former Council member Kirstan Harris-Talley arguing against it suggesting that it might have more value as an economic development project for the businesses along its path than as a transportation project, and that investing in buses might be a better choice given the rapid pace of growth in Seattle. OBrien and Johnson have been strong proponents, however; at last weeks committee meeting, Johnson came to SDOTs defense in arguing that the $8 million discrepancy in operating cost estimates could simply be due to ongoing negotiations between SDOT and Metro on an operating agreement. The internal Metro memo at the heart of that debate suggests otherwise: that (from Metros point of view) SDOT was consistently underestimating costs of the new streetcar, refusing to hear feedback that contradicted its own projections, and also failing to staff the First Hill streetcar operations consistent with the higher-than-expected mechanical failure rate of the existing fleet of streetcars.

This is not the first time SDOT has been accused of flawed financial planning for a new project and of withholding information from the Council. Two years ago, the Council was debating a similar situation with the Pronto bike share system, which had overrun costs, missed revenues, and quietly transferred money between budget line-items to hide the deficit without informing the Council. And similarly, Johnson came to SDOTs and Prontos defense.

In her press release this afternoon, Durkan said:

Herbold issued a statement this afternoon praising the Mayors decision. From her statement:

Even OBrien, chair of the Councils Sustainability and Transportation Committee, lined up behind the decision to halt the project:

Bagshaw, whose district includes downtown and who has generally been supportive of the Center City streetcar project in the past, also threw her support behind the mayor:

No word from Johnson this evening. I have an inquiry in to him, and will update this post if I hear back from him.

Aside: the one project associated with the Center City Streetcar project that Durkan didnt halt was the replacement of seismically vulnerable water mains. Sounds like a smart decision.