Seattles electric utility doesnt have to make a profit. But as customers conserve more and modern appliances consume less, City Light must get creative so it can at least break even. 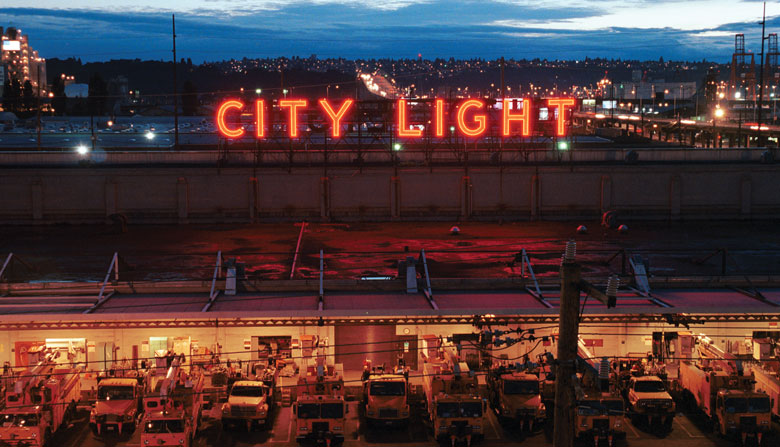 The trading desk at Seattle City Light is a standard-issue office cubicle, unremarkable except for the oversized monitor displaying real-time electricity prices on the Western power grid.

About two, is the traders reply: $2 per megawatt hour, the going rate to buy electricity one hour in the future.

Its early afternoon, and the glut of cheap midday solar power from California has driven the price down below the utilitys cost for generating electricity from its own hydroelectric plants.

Intraday arbitrage and futures trading is a regular part of how Seattles public power utility conducts its business. If this dredges up memories of Enron, market meltdowns and rolling blackouts, relax. Between its own generation capacity and its long-term contracts, City Light has more than enough power under its control to cover the citys needs. The trading activity, however, reflects tectonic shifts in the power industry that have forced the utility to reevaluate its business strategy. As trading becomes less profitable and conservation initiatives reduce revenue, the utility, unable to cut costs easily, must look for new sources of revenue even as it continues to raise rates.

As a public utility owned and operated by the city of Seattle, City Light has several business advantages. Perhaps the most important is that it doesnt need to return a profit to shareholders. Simply breaking even suffices. It also carries municipal bonding authority, which keeps its cost of capital low in a capital-intensive business.

But there are also disadvantages. It doesnt choose its customers; its subject to the politics and policy whims of City Hall; and there is a mountain of laws and policies restricting its business activities. This is on top of the burdens that all utilities face: regulatory structures that determine pricing, and up-front capital costs for generation, distribution and other necessary infrastructure.

Phil Jones, who served for 12 years on the Washington Utilities and Transportation Commission regulating the states private utilities, thinks Seattle City Light is well run. Its a good leadership team, he says, very good in scale. I think it has some pretty modern infrastructure in conservation. Theyve been one of the leaders for some time. They have a pretty big advantage with what I call the hydro endowment.

The business model is straightforward:

SCLs challenge, however, is that power generation, wholesale markets and retail consumption have all changed dramatically in recent years. So, it must now rethink every part of its plan.

Not so long ago, a handful of energy sources dominated power generation: coal, natural gas, hydroelectric and nuclear. Looking forward, solar and wind constitute significant and growing contributors, abundant fracked gas is rapidly replacing coal, and nuclear power will either phase out or be replaced with a new generation of small modular reactors.

These changes have added a new dimension to power generation: the question of reliability. Coal, gas and nuclear generation plants run around the clock, while solar is only productive during daylight hours and wind is even less reliable. Hydroelectric power is generally reliable year-round, with seasonal variations. Washington experiences surplus capacity during the late-spring/early-summer snowmelt in the mountains and far less capacity in late summer when the snowpack is gone and river flows decline. BACK TO THE FUTURE: As City Light explores new revenue streams, Robert Cromwell, the utility’s interim officer for power supply and strategic planning, envisions a return to Seattle’s early days, when the bulk of the transportation system ran on electricity. Photo by John Vicory.

But solar alone wont suffice. Utilities also need reliable sources to provide electricity throughout the night. That reliability comes at a cost. Fuel-based generation, such as gas, coal and nuclear power, is more expensive. Gas and coal also generate waste products that contribute to climate change; utilities in states such as Washington and California, which have committed to green energy, must purchase carbon offsets to compensate for burning fossil fuels.

This situation creates a distinct opportunity for Seattle City Light. Nearly all its power is hydroelectric, including its own generation sites, its large contract with the Bonneville Power Administration and its smaller contracts with other suppliers. Hydropower generation is inexpensive, mostly reliable and storable as water behind dams, giving the utility the flexibility to adjust its power production as demand fluctuates or as arbitrage opportunities appear.

Cromwell explains how Seattle City Light takes advantage of that situation: When the wind and solar pick up, typically in the middle of the day, we will store water and buy zero or negatively priced energy, and when the prices ramp later in the day, well ramp up our production and sell energy.

Unfortunately, in the past few years, the average price of electricity on the wholesale market has dropped precipitously and limited City Lights ability to profit from arbitrage. Its wholesale revenue declined from a high of $176.2 million in 2006 to $61.2 million in 2015, and is projected to drop to $40 million by 2022. This decline led to revenue shortfalls between $28 million and $40 million per year from 2014 to 2016, a burden that fell on its retail business to cover.

In terms of our strategic plan, says City Light CFO Paula Laschober, we have had ever since 2013 an assumption that the amount of wholesale revenue in that plan is gradually getting lower.

Jones also concurs at least in the short term. I think its the new normal for the next year or two, maybe three, he says. But we have to be careful in the longer term. Weve seen natural gas prices fluctuate.

Some of that is due to larger forces at play, such as improved, heat-efficient construction standards in buildings and increased housing density. But a large portion is due to conservation measures, many of which Seattle City Light itself champions: more efficient electronics and appliances, better furnaces and water heaters, and the massive switch to LED light bulbs. Cromwell puts a positive spin on this: The utilitys cost to reduce consumption through conservation $30 to $35 per megawatt hour is cheaper than its cost to buy power under its contract with Bonneville. Our loads would be 20 percent higher if not for the conservation that weve done over the decades. Thats a great big power plant.

Nevertheless, the consumption trend puts a strain on its bottom line. In any other business, declining sales would lead to declining revenue. But since SCL needs to reach a target revenue level to cover the high fixed expenses of a capital-intensive business, it has no choice but to raise rates. In practice, City Light has two separate retail businesses with different characteristics: residential and nonresidential, consisting of commercial and industrial customers as well as the citys own consumption for streetlights, traffic lights and other needs. Of the utilitys 423,000 customers, 10 percent are nonresidential, but they represent two-thirds of total retail power consumption.

The utility uses one rate structure for all residential customers, but three different ones for low-, medium- and high-consumption nonresidential customers to try to capture the disparities in fixed and variable costs in delivering service to each. That mix creates a dizzying array of options for how to increase rates, and challenges in assessing the fairness in rate increases as City Light spreads the burden across its customers. It is discussing options with the City Council, which must approve all rate changes.

This is a big issue not just with City Light, but all across the country, says Jones. With low growth, pressure on utilities to invest more and conservation issues, they are all looking at their rate structures.

It is ironic that at a time when power generation costs are falling, Seattle City Light is increasing its retail rates. And the rules of economics suggest those higher rates will drive consumption even lower, which will lead to more rate increases in the future as the utility responds. From an environmental perspective, driving down consumption is not a bad outcome. But for City Lights bottom line, its a vicious cycle leading downward.

The good news is that, even with the increases, Seattle City Lights retail rates are among the lowest in the country, thanks to all that cheap hydroelectric generation. Experts also debate how much capacity for further conservation remains, and thus how much more retail consumption can fall. The utilitys own biannual conservation assessment report shows that conservation happens in waves, often driven by technology advances such as heat pumps and LED bulbs. It predicts substantially more conservation in the next several years within the commercial customer segment, with 25 percent of the potential saving coming from lighting upgrades. Among residential customers, nearly all the savings will come from two sources: interior lighting and new water heaters. Once those opportunities are exhausted, consumption may find its floor and start tracking upward again in lockstep with Seattles population growth.

Cromwell acknowledges that there isnt currently a robust pipeline of new technologies expected to drive further conservation reductions, but he points out that the past technologies often werent predicted well in advance. He also believes that being able to predict future conservation is less important than it seems. If we design our programs and our rate structures properly, he says, then we dont need to have foresight on what technologies will come along. Theres a sort of logical cycle there that ultimately delivers a lot of good efficiency.

The long-term prospects of Seattle City Light tie directly to the larger questions of climate change and the role of electricity in the energy ecosystem. The utility has led in establishing clean electric power as a viable alternative to fossil fuels. That commitment creates new business opportunities, including electrification of the citys transportation infrastructure: light-rail trains, streetcar lines, and the fleet of vehicles that City Light and other city departments operate.

City Light is also looking at installing electric vehicle charging stations around the city and providing onshore power for cargo freighters and cruise ships along the waterfront.

I think were returning to our roots in delivering services to our customers, says Cromwell. Electrification of transportation is certainly a future opportunity in terms of meeting our customer needs and addressing our revenue decline. Its also center in meeting our environmental concerns.

An impediment, however, resides in the state laws and regulations that restrict the utilitys ability to incentivize electrification and establish public-private partnerships, despite lobbying efforts. I think the public policy will drive the legislation thats appropriate, Cromwell observes. Were certainly on that path and, obviously, we didnt achieve what we wanted to this [legislative] session, but I think well see a large need for that and Im optimistic well get there.

Meanwhile, Seattle City Light is doing what it can in the present to stay out of the red. It is attempting to persuade the City Council to let it join the West Coast Energy Imbalance Market, a 5-minute-ahead market that would give it one more opportunity for wholesale arbitrage income. It is also revising its retail consumption models to improve accuracy. As for the immediate decisions on rate increases, Laschober is pressing forward with the City Council to reach a resolution.

Despite dramatic changes in the power industry, City Lights leadership doesnt see the sky falling. The short-term revenue declines are holes it believes can be plugged with tweaks to the rate structure. And it can clearly see the forces reshaping its business, even if it hasnt yet resolved how to address them.

It also recognizes that while it can provide recommendations, the larger issues are public policy questions that will be decided by the new mayor, the City Council, state legislators, and state and federal regulators in a conversation that will play out over months and years.