The new agreement will go toward financing affordable housing projects, pedestrian and bicycle improvements, and more, as construction on the addition to the Washington State Convention Center approaches. 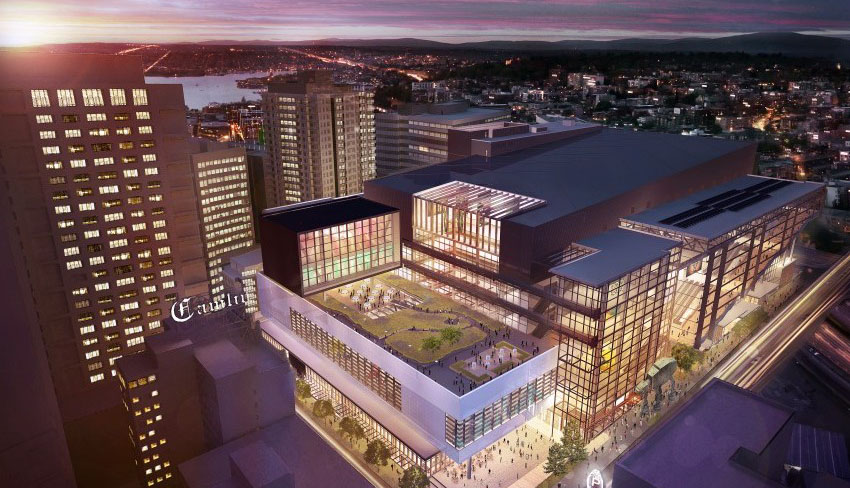 As construction on the Washington State Convention Center gets closer to becoming a reality, a new partnership providing community benefits has been agreed upon, Mayor Tim Burgess office said.

The agreement provides for more than $82 million to go toward a variety of community projects, including $29 million in affordable housing, $20 million for pedestrian and bicycle improvements at Pike-Pine, and millions more for other infrastructure improvements, housing programs, and other on-site features.

The agreement involves the mayor, King County Executive Dow Constantine, the WSCC and the Community Package Coalition (CPC), a group that includes several civic organizations in downtown and near-downtown neighborhoods.

The proposed $1.4 billion expansion of the WSCC could begin construction in 2018 and could be open for business by 2021.

See the full press release from the mayors office here:

SEATTLE (October 16, 2017) Mayor Tim Burgess, King County Executive Dow Constantine and representatives from the Community Package Coalition (CPC) and Washington State Convention Center (WSCC) today announced an agreement on terms for WSCC to provide more than $82 million towards a suite of benefits for the community. This partnership moves the Convention Center Addition project and the creation of new convention space closer to reality.

This historic agreement will expand Seattles wildly successful convention center while creating more open spaces in the surrounding neighborhood, safer routes for pedestrians and bicyclists, and more affordable housing, said Mayor Burgess. Thousands of hospitality industry jobs are likely to be created as a result of this project, and so our partners in labor are also launching a training program to help workers prepare for these coming jobs. Legislation clearing the way for this project will most likely be sent to the City Council in January. I urge the Council to quickly review and act so this project can move forward.

Over the past ten months, and in collaboration with City staff, WSCC and CPC an alliance of community, walking and biking, and housing groups an agreement was reached that will fund $61 million in benefits for the community sought by the CPC, increasing the total benefits recognized by the CPC to more than $82 million. The CPC items provide more than $16 million in improvements for pedestrians and bicyclists, more than $15 million toward community open space projects, and approximately $29 million for affordable housing. In addition, the WSCC is contributing $5 million to King County toward affordable housing as part of the sale of Convention Place Station, and will pay roughly $4.3 million into the citys incentive zoning program, bringing the full package of community benefits to more than $90 million.

From the beginning, our coalition has been clear: we want to see our downtown businesses and hospitality industry succeed. We also want to ensure the Convention Center provides a package of public investments in our community commensurate with the impact this project will have on our city, said Alex Hudson, Executive Director of the First Hill Improvement Association. Today, we are proud to announce a historic package of public investments that demonstrates what is possible when development and community groups work together to realize a shared vision to build a well-connected, accessible, people-centered city with transportation options, quality public open space, and housing opportunities that benefit all.

The expansion of the Washington State Convention Center will bring tremendous community and economic benefits to the region, said County Executive Dow Constantine. For Metro, the sale of Convention Place Station means a total of $275 million for expanded bus service, as well as funding for affordable housing and public art. With todays announcement, we take a big step toward of our goal of creating jobs while keeping the region moving.

Earlier this year, the King County Council approved the sale of Convention Place Station to WSCC which will become the site of the expanded convention facility for $274 million in principal and interest over 31 years.

I want to applaud Alex Hudson and the Community Package Coalition for their skilled advocacy, said Councilmember Sally Bagshaw. I have been watching this project closely for quite some time and have seen firsthand how the WSCC team showed genuine interest in hearing community priorities. The result is impressive: a project that will truly benefit our community. This is a wonderful example of how the City can play a convening role in getting deals done.

The WSCC Addition project will roughly double the space of the existing convention center facility, which has turned away as much business as it has booked in the past five years due to a lack of space, resulting in $2.13 billion in lost economic benefit for the region. To build the Addition, WSCC is seeking approval on three alley vacations and two below-grade street vacations from the City, in exchange for which it must provide a package of public benefits.

I want to thank the City and the County for their stewardship of this project over the past several years, said WSCC Public Facilities District Board of Directors Vice-Chair Deryl Brown-Archie. The Mayors office, especially, was critical in helping move this project forward so we can create new, improved community connections, keep our tradespeople working and provide thousands of ongoing jobs once the Addition opens.

WSCC will fund the benefits in the agreement in three phases: Funding from the WSCC through the Citys public benefits process and other commitments; funding made available through a state legislative change to remove an exemption in the existing lodging tax; and, an agreement to provide funds after completion of the Addition.

Construction is expected to begin in early 2019. The Addition will open in 2021.

The specific funding amounts are below: