No Fuel. No Crew. 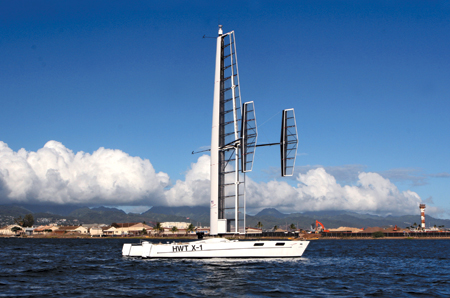 Harbor Wing Technologies has built a sailboat like no other (except maybe Jack Sparrows Black Pearl). It has no crew. Instead, the vessel with a computer-controlled sail, called a WingSail, is preprogrammed or operated remotely, making it well suited for everything from monitoring enemy submarine activity to tracking endangered marine mammals to intercepting drug traffickers.

The carbon-fiber, multihull boat, called an Autonomous Unmanned Surface Vehicle (AUSV), is still in the prototype stage. But CEO Stuart F. Platt, a retired rear admiral, is confident the boat will be a success by saving customers moneyit can operate three or more months at sea with no fuel before being brought in for maintenance. Its also planet friendly since it releases no pollutants into the water or atmosphere. Its time for Seattle to be aware of what weve achieved, Platt says. I feel that it will be a national story.

The company, with headquarters in Seattle and offices in Hawaii, has received about $10 million in the past five years from the Department of Defense to develop the concept. Last summer, Harbor Wings prototype, the X-1, was fitted with sophisticated surveillance and monitoring equipment from the National Oceanic and Atmospheric Administration and the United States Navy, then tested near Pearl Harbor. The boat can carry equipment such as infrared and thermal-imaging devices, live video cameras, radar and underwater sonar, and other listening devices.

Because the vessel for the Navy is made of composites with no hydraulics, screws or machinery, it is perfectly silent, which makes it harder for enemy vessels to detect it while it can more easily detect them. In addition, the silent running makes it an easier and safer way to detect sea mammals.

Platt, who joined the company in 2003, sees strong potential for these unmanned boats in the wake of the growth in demand for unmanned planes, especially for counterterrorism applications. The vessels could patrol oil platforms far off the coast, for example, sending real-time information to security stations in the instance of a threat. The boats will sell for more than $6.5 million each in a production run of 10.

The company hopes to sell its computerized WingSail, which is being built by Composites Universal in Scappoose, Ore., for use on commercial vessels such as cargo ships or even ferries. Two or three 100-foot sails on a commercial vessel could cut fuel costs by as much as 30 percent.