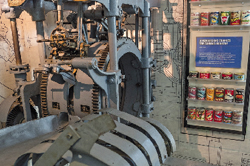 When Seattles Museum of History and Industry (MOHAI) throws open the porthole-windowed doors of its new home on December 29, the 50,000-square-foot facilitywith 50 percent more public and exhibit space than its old Montlake locationwill be ship shape, thanks to extensive renovations. Working with Seattles LMN Architects and Sellen Construction (and a $60 million project budget), MOHAI returned the former Naval Reserve Armory Building at South Lake Union to its Art Deco glory and upgraded it to exacting Platinum LEED standards. Executive Director Leonard Garfield says the approach was one his organization is familiar with: Lets treat it as an artifact and restore it.

Moving MOHAI from Montlake to South Lake Union could be compared to the environmental process of daylighting a creek that has previously been forced to flow through a dark culvert. Because of a series of additions, the old building felt more like a labyrinth than a place of learning. The old space grew like Topsy, beginning with the reorientation of the entry from the front to the back, Garfield explains. As spaces were added, the visitor experience became more fragmented. And there was never sufficient room to really tell all the stories or create the dramatic experiences that the armory allows.

In the new building, the collection can breathe again, and so can the visitors. The armory, by contrast, says Garfield, is more centrally organized, with a dramatic atrium … a series of surrounding galleries that allow visitors to come into more intimate contact with the authentic stories and stuff of the past.

The atrium is truly stunning, with soaring ceilings and acres of windows offering abundant views of Lake Union. Garfield says the windows ensure that visitors are always aware of exactly where they are in the cityconscious of the present while strolling through the past. Creative Director Ann Farrington adds that the varied pathway through the core exhibits brings you back out to the atrium as often as possible, to give perspective.

The result is that Seattles history feels alive and welland front and center, rather than tucked away in a closet. This perspective is echoed in the new space several other tangible ways, including the loosely circular progression of exhibits, which eventually returns you to where you started (and the Prologue or Epilogue Theater, in which visitors can choose to watch a film at either the beginning or end of their journey).

Farrington says the museums organization strategy is not a timeline, but a series of stories strung like pearls. The new space reveals how Seattles past, present and future hang together all at once, a shining necklace.