New Growth in the Silicon Forest 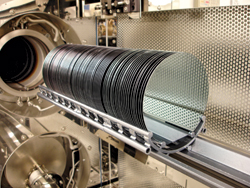 After enduring a two-year slowdown marked by furloughs and other painful cutbacks, southwest Washingtons electronics industry is coming back. Semiconductor fabrication operations and related businesses in Oregon and Clark County, Wash., have shifted from running well below capacity to operating at maximum levels; theyre bringing back furloughed employees or hiring new workers and even considering expansion.

Linear Technology Inc., which hired 70 workers at its processed-wafer plant in Camas, Wash., in the past 12 months, is one of many electronics companies in the region stepping up production to respond to rapidly expanding demand. Linear now has a workforce of 315 and plans to add more, if business remains as strong as expected.

The products we make interface with the world we live in, says Rob Barber, Linear plant manager. We are producing a range of industrial products, all with good growth opportunities.

Growth and diversification in the electronics sector have triggered a strong comeback for the $300-billion-a-year global computer chip business, whose sales surged 32.8 percent in 2010. Chips, the brains of most electronic products, have found their way into everything from smartphones and iPads to cars and cameras. Sales are expected to increase to $318.7 billion this year.

Strong global demand has also helped boost local production. According to the Semiconductor Industry Association, a national trade group based in Washington, D.C., semiconductors have been Americas top export for the past five years, with 54 percent of market sales going to the Asia Pacific region.

Linears recent hires are welcome in southwest Washington, which has been plagued by a housing industry crash and unemployment rates that peaked at 14 percent, and are now stubbornly stuck near 10 percent. Although new hires are still relatively modest, there is potential for thousands of new jobs as investment pours into the sector.

Oregon still has the strongest concentration of semiconductor companies in the region, with such powerhouses as Intel and Hewlett-Packard maintaining large manufacturing operations there. Intel, Oregons largest private employer, has a workforce of 15,000 and it recently announced plans to build a multibillion-dollar semiconductor fabrication and research-and-development facility in Hillsboro, Ore., scheduled to be completed in 2013.

What few realize is that Portlands silicon forest has long since spread north across the Columbia River into neighboring Clark County, Wash., where Intel competitors and suppliers have set up operations. California-based Linear is just one of 10 chip-related businesses in Clark County, which together employ 3,200 people.

To be sure, there are threats on the horizon. Many of the electronics companies first established themselves in the Northwest because of cheap hydroelectric power available from the Bonneville Power Administration. The companies that make silicon wafers, the materials on which semiconductor designs are etched, are particularly heavy users of power, and many industry leaders worry about talk of increased rates that could steer more investment to China and other places with national programs to promote their semiconductor industries through subsidies and tax breaks.

But Bart Phillips, CEO of the Columbia River Economic Development Council in Vancouver, Wash., isnt too worried. If chip businesses came here because of power, they remain here for other reasons, Phillips says, pointing to easy access to markets, including chip producers in Oregon and Washington, a strong labor pool and a great quality of life. The area also benefits from a strong ecosystem of semiconductor companies built around industry powerhouses, such as Intel.

With Intel Corp. expanding, companies here dont want to get left behind. Intels growth will spin growth throughout the supply chain, he says.

An Intel competitor, WaferTech, operates a mammoth foundry in Camas where 950 workers produce custom chips for a variety of customers. Owned by Taiwan Semiconductor Manufacturing Inc., WaferTech is the largest semiconductor integrated circuit foundry in the U.S.

Other industry players in the region include:

Heraeus Shin-Etsu, with an estimated 100 workers in Camas, makes quartz crucibles used to grow silicon crystals that are sliced into wafers.

Sharp Microelectronics of the Americas, a chip design and marketing business owned by Sharp Corp., operates a separate research laboratory in Camas where engineers have made significant contributions to LCD television technology. It employs 380.

Providing an underpinning to longer-term industry innovation and growth in southwest Washington is the School of Engineering & Computer Science at Washington State University Vancouver (WSUV). By fall, the school will move into a new $43.5 million engineering building where students will have more opportunity to work in collaboration with area private industry researchers on micro-nano device design. The school, which has an enrollment of 300 students, will graduate its first class of electrical engineers in 2012.

Overall, we think industry in the region is happy with the results of our efforts here, says Hakan Gurocak, the schools director. With strong demand for his graduatesmost are getting two or three job offershe foresees enrollment climbing to 500 in five years.

Down the road, planners envision a research park adjacent to the WSUV campus as well as mechanical engineering and more computer science curricula, Gurocak says.

Phillips points out that almost all technology hubsSilicon Valley, for instancegrow up around established universities with strong research programs. WSUV, with its EE [electrical engineering] degree, more faculty and research grants, represents a first component for us, he says.

Clark College in Vancouver also offers a range of two-year technical training programs, providing talent to the regions chip industry, says Pat McDonnell, senior director of site services at SEH America Inc. Basic math, chemistry, English as a second language and science are all necessary training protocols for the bulk of our production employees, he says. Clark has worked with us on those needs.

So what will it take to trigger capital expansion and more job growth by the chip industry in southwest Washington? Certainly theres plenty of land. WaferTech sits on a 260-acre site with enough room for another foundry. Linear Technology has already talked about a second plant at its site in Camas. SEH America bought Hewlett-Packard Co.s 174-acre Vancouver campus two years ago. nLight expects to keep growing. Sharp owns real estate around its facilities in Camas.

All of this potential could add up to significant growth during the next decade as companies look for opportunities in the solar business and other green technologies. And with the chip business expected to remain strong into 2013, the money should be there for equipment upgrades and expansion.

Southwest Washingtons chip industry can compete globally on a range of operating costs … labor, taxes, land and even on power, Phillips says. The area where we can fall short is construction costs. When you build a billion-dollar fab [plant], … thats an important factor. 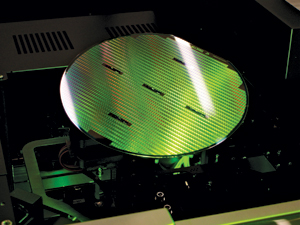 Our crystal-growing business here requires huge amounts of electricity, McDonnell says. Our biggest area of concern is the price of power going forward.

Barber says Linear likes most aspects of doing business in southwest Washington. We have a good base to hire from with a technically savvy employee community, he says. The livable environment is favorable for attracting workers. Its easy to get to California from here. Our big worry is that power rates could go up significantly.

John Hamburger, a Linear spokesman at its California headquarters, confirmed that a second plant has been discussed at Camas. The environment is positive, but, that said, theres been no update on the project, he notes.

Phillips and his staff are setting out to make sure southwest Washington gets a share of the action. This spring, he is joining an economic development trade mission to Asia led by Oregon officials. And, thanks to the Intel expansion, hes also heading to California, where he sees opportunity to lure more chip-industry suppliers to southwest Washington.

The rest of Washington state needs to understand that the tech industry in southwest Washington is robust and growing, Phillips says. It has been among the first out of the recession and is poised for new capital investment, whether it be new equipment in existing facilities, such as a $1.2 million cooling system at SEH, or new construction. Id say two out of three of our tech employers are poised to do something.