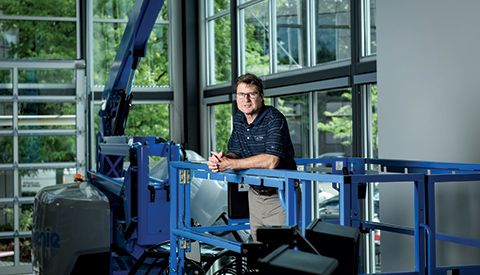 As the development surge continues apace in and around Seattle, aerial booms and scissor lifts crowd every construction site and a local company quietly thrives.

Redmond-based Genie Industries, named 2014s No. 1 aerial platform manufacturer by Access International magazine, is not only growing in the United States, but the maker of the ubiquitous blue and gray lift machines is also aggressively expanding its reach across more than 80 countries on almost every continent.

From one man who bought the rights to Genies original technology in the 1960s, the company has grown to employ 1,800 in Redmond and more than 3,800 worldwide. The equipment rental industry makes up most of Genies business, with 90 percent of its domestic sales going to rentals and 80 percent outside the United States.

Theres a lot of pride locally, says Matt Fearon, president of Terex Aerial Work Platforms, but traveling around the world, you cannot believe where you see these machines.

Genies roots go back to 1966, when Bud Bushnell started working for Seattle Bronze, a company that produced hoists in Kent. The business faltered, so Bushnell bought rights to the technology and started Genie its name inspired by the hissing sound of the compressed air used to raise the machines operator, like a genie rising from its bottle.

Beginning a history marked by impressive in-house innovation, Bushnell acquired the patent for the first Genie hoist in 1968. It was the same year Genies business got a big boost from a Japanese ironworks company representative who visited the Seattle area and ordered 15,000 hoists on the spot.

Based in Kirkland at the time, Genie traced much of its early growth through the 1970s to the emergence of the equipment-rental business. The swelling demand fostered a spirit of innovation and improvement that Fearon calls part of our fabric. In 1974, it introduced the Genie Teletower, which carried more weight than previous lifts. In 1984, it brought out the Z-Boom, which became the worlds most popular lift by carrying workers up and over other structures and obstacles to reach a work area, thereby improving workers reach and flexibility with a single machine.

The Z-Boom was a groundbreaking innovation that was soon adopted by other manufacturers, says Karen Stash, Genies senior director of global product management and marketing. Another Genie innovation is the X-chassis, which allowed the company to build a machine with a larger base that provided stability and also included an expanding axle design for flexibility in storing the booms. Too, Genie was first to introduce the worlds tallest self-propelled boom and hydraulic material lifts.

Bushnell emphasized customer service, Fearon says, making personal visits to clients to see how Genies equipment worked in the field and how it could be improved upon, as well as identifying unmet needs at construction sites.

In addition to maintaining a research and development department, Genie encourages ideas from the shop floor and has adopted much of this input, Fearon says.

Genie moved to Redmond in 1982 and grew during the next 20 years to nearly 1,500 employees. In 1998, it opened an additional manufacturing facility in Moses Lake, making Genie the largest employer in Grant County, according to the Grant County Economic Development Council.

In 2001, construction screeched to a near halt amid the turn-of-the-millennium recession, necessitating a different path to growth. Connecticut-based Terex Corporation, a maker of cranes and other massive manufacturing equipment, bought Genie in 2002, providing an infusion of cash, technology, new factories and global markets.

Terex opened new Genie-owned factories in China, Italy and the United Kingdom, not to outsource work but to get equipment to international customers faster, says Chad Hislop, one of two engineering directors at Genie. The Terex acquisition also brought with it a factory in Rock Hill, South Carolina.

The factories are strategically situated so international customers can receive the products they order at the same speed North American customers do in about two weeks. That helps the company offer the same level of service in each market. You have to have local people who are building in the local markets, Fearon explains.

Developing countries remain Genies biggest area for growth, he adds. In addition to the move to better safety standards, theres an uptick in building projects. Meanwhile, the North American market is cooling off from a manufacturers perspective. Terex reported first-quarter sales in its Aerial Work Platforms business were flat, at $520.2 million, compared to the same period in 2015.

The rising markets today are in China and Western Europe, Fearon says, but Genie also hopes to capitalize on South American markets where developing countries are improving infrastructure, building airports and modernizing ports.

Genie has three factories in Redmond, where the company builds scissor lifts and other products. Workers operate under a regimented lean manufacturing schedule, performing assigned tasks in 10 minutes before moving on to the next machine. A total of 10 hours of work goes into each machine. Genies international factories employ the same Lean approach.

The sun never sets on the Z-45, Hislop quips, referring to a Genie boom that lifts workers nearly 52 feet in the air.

Genie remains headquartered in Redmond to maintain the small-business spirit the company was founded upon and to retain the talent and loyalty of workers, many of whom have stayed with the company for decades.

You cant easily duplicate years of experience, says Fearon, who believes the Pacific Northwest culture draws many employees and clients to Genie. A new administration office, which opened in Redmond within the past year, is a nice addition. Overlooking hills of evergreen trees, Fearon calls it a fantastic place to bring customers.

New digs or not, Genies customer base is loyal and enthusiastic. Tom Hammerslag, the owner of Great Lakes Access, an aerial-lift dealer in Grand Rapids, Michigan, likes Genie products because Genie genuinely likes his patronage. The Genie guys care, Hammerslag says. You go to the factory [and] people hug you. Theyre warm and welcoming because Genie always knew they needed their customers more than their customers needed them.

Paul Zaremba, principal at SkyKing Lift Rentals in Bloomingdale, Illinois, adds that Genie stands above the competition because of its history and its innovation. Its real simple, he says. They make stuff that other people dont. We tell other vendors, If you dont want us to buy from Genie, then you need to compete with them, and you dont. You dont make a 3232 [scissor lift], you dont make a push-around [aerial work platform] and you dont make a Z-30 [self-propelled articulating boom].

While Genie has expanded globally to remain competitive, Fearon insists Redmond is an important part of our past and our future. So much so that, when Genie engineers are offered positions abroad, theyre loath to leave the Puget Sound region.

Part of that attachment is no doubt attributable to living in such a geographically blessed place as the Seattle area. But Fearon believes Genies commitment to continuous improvement fosters a sense of community and loyalty thats hard to match.

The philosophy, he says, is instilled in temporary and permanent workers alike in the hope that whatever they learn at Genie, they will apply to their work at Genie or wherever they go next. At Genie, Fearon says, we feel that anybody who sets foot in Genie will walk away with a higher set of skills than when they walked in the door.

PARENTING ISSUES
In June, Genies parent company, Terex Corporation, abandoned merger talks with Chinas Zoomlion Heavy Industry Science & Technology Company. Terex had consented to an acquisition by Zoomlion for $3.4 billion, but talks fell apart, with both sides blaming the other for the failure. After terminating discussions with Zoomlion, Terex agreed to sell its Material Handling and Port Solutions business to Konecranes of Finland for $1.3 billion. That deal is expected to close next January. Terex had earlier planned to merge with Konecranes before Zoomlion came forward with a seemingly sweeter deal.