Manufacturing Innovators of the Year 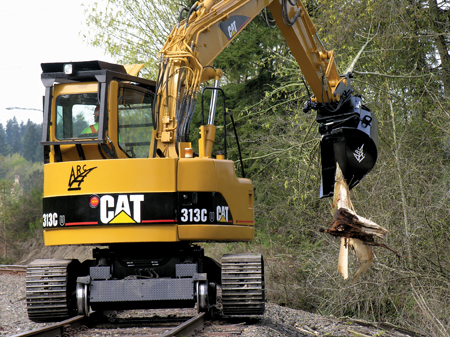 Ive been working on the railroad no longer means gangs of workers pounding spikes and lifting rails. Much of the work is now mechanized, but you cant just take any piece of construction equipment and put it to work. Aside from the matter of the rails interfering with the bottom of the equipment, maintenance-of-way workers often handle tasks like clearing brush below the level of the roadbed, which poses tipping hazards.

Advanced Rail Concepts, formed by Wendell Malmberg and Rick Johnson, has been developing versatile machines specifically designed for tasks ranging from cleaning culverts to stacking, loading and installing rails and ties, and spreading ballast. Its RailX products arent rail bound, meaning they can run on rails or move onto or off the tracks quickly at most locations (thus reducing fuel consumption, the company says). A retractable rail-wheel undercarriage allows a standard Caterpillar-style machine to run along the rails, while the conventional Caterpillar treads are raised clear of the ground. To go with the design of the machine itself, the company has come up with the Roto Gripp Bucket, an easily attached, 360-degree rotating head that allows one machine to replace multiple pieces of older maintenance equipment and accomplish multiple tasks, including cleaning ditches and removing trees.

Advanced Rail Concepts has five sizes of retrofit machines, all made in Washington, and its now developing a machine for rebuilding and maintaining trestles while keeping workers safe.

When the question is Wheres my order?, the answer the customer wants is not Were working on it. Thats an especially unhelpful answer for companies that have adopted a just-in-time approach to their own production flow.

So how does a supplier give the customer real-time, useful information about the status of a project?

In the case of Hobart Machined Products, a specialty contract manufacturer of parts for the aerospace, automotive, medical device and electronics industries, the answer was an Omnitrol Networks supplier visibility system that uses radio-frequency identification tags and sensors to track the status of an order. Through a secure web portal, the customer has the ability to figuratively look inside the suppliers plant and understand whats happening to a specific part.

Adopting a system like Omnitrols isnt cheap for a small company like Hobart, which has seven employees and estimates it took $10,000 and two weeks to install the system. But Hobart reaps benefits as well, because the system eliminates both the task of manually entering and retrieving tracking data and the potential for error that such a tedious process can create.

The information generated by the system also allows Hobart to more effectively manage its order commitments, production schedules and deliveries by generating notifications to quickly address issues before they had an impact on delivery, the company says, as well as by identifying bottlenecks. 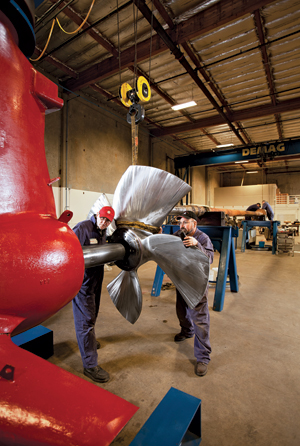 If youve ever seen a tugboat stop, change directions or spin as nimbly as a gifted running back, youre seeing whats known as a Z-drive in action.

Z-drives, unlike conventional propellers mounted on a fixed driveshaft, can be rotated to provide thrust in any direction. Theyre a European development, and although Z-drives are common on tugs in American waters such as Puget Sound, theyre made in Europe. That distance can mean a lot of expense in buying multiple Z-drives to replace broken systems or a lot of downtime waiting for replacement parts.

Sound Propeller Systems grew out of Sound Propeller Services, which makes custom propellers and repairs marine propulsion systems, has been developing its own 1,500-horsepower azimuthing (horizontal rotation) Z-drive. And it wont be just the finished product that is American: Sound Propeller wants to source the components in the United States. It is designing the units with modular assembly in mind, making it faster to replace parts and reducing vessel downtime. The company plans to introduce 2,500- and 3,500-horsepower Z-drives, too. 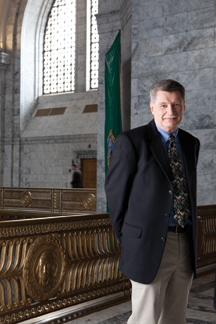 Its hard work getting a hit product into the consumer market. Its tougher still to avoid the trap of being a one-hit wonder. Pacific Bioscience has accomplished the first with its Clarisonic skin-care device. (You could argue that its the second hit for company founder David Giuliani, developer of the Sonicare toothbrush.) The classic Clarisonic has been successful enough to garner superstar endorsements: Fergie of the Black Eyed Peas (this years Super Bowl performers) was quoted in a British newspaper as saying shes a fan of the Clarisonic.

The company has been tweaking the lineup of its original products, introducing a smaller version called the Mia and offering new colors (this spring: turquoise!). But its also developing new products. Last year saw the introduction of the Opal Sonic Infusion System ($245), a handheld skin-treatment device that dispenses a specially formulated anti-aging serum designed to reduce wrinkles and fine lines around the eyes, lips, brow and forehead.

The Pacific Bioscience story isnt solely about products. Its also about how and where theyre madeFactoria, to be specific. The company is also trying to drive waste out of its own production and consumers homes. Pacific Biosciences received an award last year from Allied Waste for its high ratio of recycled material to total waste (83 percent). The company also offers postage-paid envelopes to customers to mail back Opal dispenser caps for recycling.

Keeping a family-owned manufacturer in business for 54 years is no big dealif you can find a niche in a crowded sector like metal fabrication and survive recessions and a substantial fire. Capital Industries (capitalind.com) has done all those things.

Still owned by members of the founding Taylor family, Capital has landed customers like Boeing, Paccar and Genie Industries by upgrading its ISO certification and adding robotic-welding and laser-cutting equipment. More investment is planned this year. It has also put an emphasis on just-in-time delivery to customers, who can avoid the expense and hassle of stockpiling inventory.