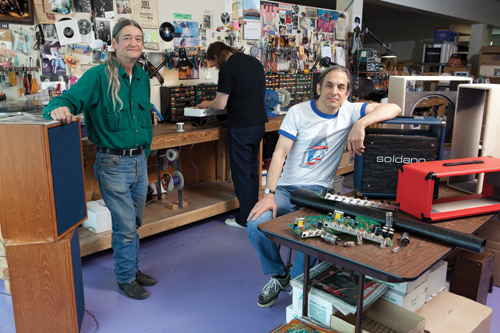 Once upon a time, a young rock and roll guitarist moved from
Seattle to Los Angeles to try to make a go of it in the music industry. He may
not have made it to the top of the charts, but his name is now a household word
among many of the nations top rock musicians.

Mike Soldano, who runs his business, Soldano Custom
Amplification, from a workshop in Seattles Magnolia neighborhood, has watched
in amazement as his equipment has been adopted by some of the top stars, making
his name synonymous with quality in the world of high-gain (i.e., really loud)
guitar amplifiers.

When he first got to Los Angeles, however, he was just a kid
from Lake City who worked in auto repair shops, liked music and liked building
things.

He started out building his own guitars and amplifiers in
the late 1970s, his initial motivation being to make what he couldnt afford to
buy. And whats more, he wasnt satisfied with the sounds he got from
commercial amps.

I knew in my head what a guitar tone should be, but I
wasnt finding anything on the market for it, Soldano says.

Mesa Boogie amps were the pinnacle of high-gain amplifiers
at the timegain being a technical term describing how much boost the original
signal gets from input to output. Soldano liked their gain, but he says there
wasnt much string-to-string definition. Hit a weird chord like a D9 and the
sound turned to mud.

In the mid-1980s, however, he gained valuable experience
working as an amplifier technician at Stars Guitars in San Francisco, where he
specialized in customizing Marshall amplifiers. Returning to Seattle, he
finished putting together his first amp, which he installed in a spray-painted
plywood cabinet and dubbed Mr. Science.

Starting in the fall of 1985, he began taking Mr. Science
along when he played gigs around Seattle, and it got noticed. Soon, he had
three people who wanted to buy one.

Musicians being who they are, only one, his friend Tommy
Martin, followed through and made a purchase, leaving Soldano with two extra
amplifiers. So he threw Mr. Science and enough spare parts for another dozen
amps into his 1938 Chevy (along with a new motor), and drove to Los Angeles,
then center of the burgeoning glam metal scene with bands such as Van Halen and
Motley Crue.

Soldano admits to being naive, cold-calling the managers of
big stars such as Lita Ford, one of the first woman guitar shredders. He found
out that, if musicians were a flaky bunch, Los Angeles managers were even more
so.

For a year, he lived and worked in L.A. with a second cousin
in a former Oriental massage parlor, nearly starving along the way and
picking up odd jobs to make ends meet, until one day by pure chance while he
was in the famous rock and roll hangout the Rainbow Bar & Grill, he ran
into Howard Leese, the lead guitar player for the Seattle band Heart. Leese
invited Soldanoand his ampup to Rumba Records where he was recording.

He played with it and within two chords, he bought the
amp, Soldano recalls. Sales No. 3 and 4 were slower in coming. Another friend
purchased the third model, and the fourth Soldano managed to sell to Steve
Lukather, the guitarist from Toto and one of the most in-demand studio
musicians in Los Angeles at the time.

But by the end 1987, Soldano still hadnt been able to sell
enough to break out. He was broke, working in commission sales and as a roadie
for the all-girl metal band Vixen. He was considering returning to Seattle. But
coming in at 4 a.m. after a late show, he saw his message light blinking.

He was tired from the gig, he says. But for some reason, I
felt compelled to check my messages.

The first message was from Lou Reed. The second was from
Vivian Campbell of Def Leppard and Whitesnake. The third was Michael Landau,
another well-connected and in-demand studio player. Soldano thought a friend
was pulling a prank on him, but it turns out those callers were the real deal.
Lou Reeds purchase was his next big sale, and by the following spring, Soldano
had six months of back orders. He moved into a work space in Van Nuys and
started building more amps, now called the SLO-100, for Super Lead Overdrive.
Andy Brauer, a professional equipment technician and shipper who worked with
Steve Lukather, wrote the first review of the SLO in Guitar World magazine (from the amp that Lukather bought). And
most significantly, Soldano was hired by Yamaha Musical Instruments to design a
line of signature high-gain amps for the company. Yahama took out a two-page ad
featuring Soldano himself in Guitar World to promote the line. It gave him enough money to stick it out, but
also put him on the map as the pre-eminent amp designer of the day.

The Guts of the Matter

But if the rock and roll revolution had any lessons, its
that young musicians like playing guitar really loud. The technical tradeoff is
that the louder the volume, the more the sound gets distorted. To a certain
extent, thats a good thing because it creates a wider variety of tonality that
helps the musician shape the sound. But it also can lead to muddy sounds,
where the notes blur together. Achieving good clarity of each note at high
volumes is the ultimate in good amplifier design.

Some amps trade on a clean sound that doesnt distort even
at high volumes, such as the classic Fender Twin from the 1960s. Others, such
as the Marshall JCM series and the Mesa Boogie Mark and Rectifier series, were
designed with high gain in mind.

Thats where Soldano created his niche. One of the SLOs
innovations was the five gain circuits the signal went through, getting a boost
each time, before reaching the power amp. At the time, no one else was putting
so much gain in an amp and maintaining good tonal definition. Hes since
released several other models of amp that use variations on the basic SLO
circuit, from the 10th-anniversary DecaTone to the Lucky 13, which paired the
gain circuit with a Fender-like clean channel.

The SLOs super-high-gain circuit, plus Soldanos use of
premium components and making each amp by hand in the United States, meant that
each SLO comes out of the shop unique, but as high or higher quality a product
as any available. Even most of the components he uses are American made, one
notable exception being the vacuum tubes, which give the amp its power. They
are no longer made in the United States, so Soldano uses SovTek tubes from
Russiain the early days, he used tubes smuggled out of the Soviet Unionand
Ruby tubes from China.

The SLO doesnt come cheap$4,400 is the base pricebut it
comes with a lifetime transferable warranty, a rarity in any business, let
alone amplifiers. These amps never come back, says Tom Ranken, a customer who
became an adviser to the company. This is the Ferrari of the market.

These are specialized amps, adds Art Thompson, the gear
reviewer for Guitar Player magazine.
Look inside. Its mil spec all the way. Its as clean as clean gets.

The SLOs signature sound, a smooth, high-volume overdrive
with loads of sustain, immediately became the most sought-after sound both in
heavy metal and its offshoots as well as other areas of music.

Mike Soldano runs the company with three employees out of a
2,500-square-foot workshop on the second story of a building where he lives
upstairs and works on classic cars on the ground floor. But he boasts an
impressive lineup of customers: guitar virtuoso Joe Satriani, Jerry Cantrell
from Alice in Chains, and Marty Friedman of Megadeth, in addition to an earlier
generation of legends like Eric Clapton, Jimmy Page, Eddie Van Halen, Prince,
and more recent indie rockers like Black Francis (Pixies), J. Mascis (Dinosaur
Jr.) and Matt Pike (High on Fire). Even blues and country players have used
Soldanos, from Elvin Bishop to Dickey Betts of the Allman Brothers Band.
Soldano says he sells around 250 models per year, from the baseline Astroverb
(priced at $900) to the SLO and custom jobs.

Its safe to say that most every major player at one point
fell under the Soldano spell, Thompson notes. The proof is that there isnt a
modeling amp on the marketamps that use software to replicate the sound and
tone of classic ampsthat doesnt include a model based on the SLO. And its
given rise to a similar line of super-high-gain amps, from the Marshall JCM
2000 to Bogners, German-made Diezels and Hughes-Kettner models.

Says Soldano: If I had had any brains, I would have
patented it. Now, almost all high-gain amps use this circuitry.

He doesnt do much of the assembly himself anymore. His
longtime chief technician Bill Sundt, whom he met at Stars Guitars, handles
most of that along with other staff, whose numbers have varied with the
economy. Last year was tough, but Soldanos already seeing an uptick in orders,
with a small backlog and almost no stock. The amps sell mainly through
independent music stores and a few direct sales. The national Guitar Center
chain once carried them, too. That arrangement ended, although Guitar Center
now places special orders with himand he currently sells more through Guitar
Center than when the amps were on the showroom floor.

Mike Soldano has received a few offers to sell, none of
which he felt were worth considering. Still, he says, hes 54 now, and wouldnt
mind retiring someday. Hes formed an advisory board to help set the companys
direction. But hes still planning new models: one for pedal steel guitars,
maybe even a bass guitar amp.

One thing wont change, however, and thats the quality of
work that goes into each amplifier that bears the Soldano name. I never
started the business to be a business, he says. That amp is me. I built that
amp for myself. Im just fortunate that other people like it.