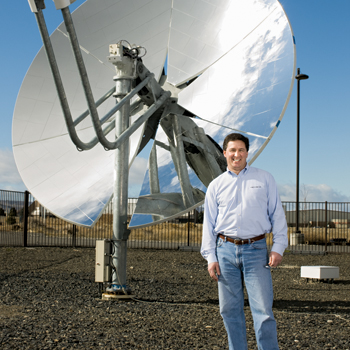 J.D. Sitton arrived at what was
known at the time as Stirling Technology, a company that had been living on
research grants but faced considerable questions about its technology,
financing and leadership.

Today, that Kennewick business is
known as Infinia. Any conversation about the companies around the globe that
could turn solar energy into a viable, commercial scale industry is likely to
include it.

Infinias technology combines the
Stirling engine, which generates energy through temperature differences between
gases in separate chambers or compartments, with a solar collector that resembles
a large old satellite TV dish, to produce electricity.

The company has landed millions of
dollars in private investments from the likes of Paul Allen, has lined up
former auto-parts suppliers to produce its generators and has begun commercial
deployment of these generators. Infinia also had to navigate the abrupt
cancellation of a contract with NASA, which was studying the concept for
deep-space exploration projects.

Credit for transformation of the
company goes to Sitton, who joined Infinia in 2002. He was the right guy at
the right time, says one Tri-Cities business leader. He has a lot of
strengths, a lot of vision.