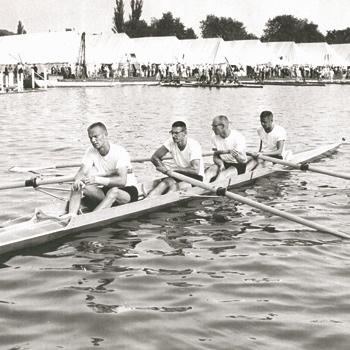 Crew has always been the ultimate team sport. Football has its star quarterbacks, basketball its Michael Jordans, but even the best athletes wont win at crew if they cant all row in synch. So its no surprise that when they graduate and move on to other pursuits, theres still a network of rowers connecting business, medicine, law and other occupations.

Crew tends to create the sort of friendships you dont get in other sports, and that spills over after graduation into social and business relationships, says John Wilcox, a retired executive compensation specialist who rowed for the University of Washington from 1958 to 1961 and now chairs its board of rowing stewards. Washington has always been a hive of rowers and ex-rowers. It is hard to do business here without bumping into a former Husky rower, Wilcox says. In Seattle, he says, crew is an absolute door opener.

Of all the many things I did to prepare for a career as a physician and administrator, rowing has been a principal contributor, says Dr. Paul Ramsey of UW Medicine, who rowed for Harvard from 1967 to 1971 and still gets out on his single at 5 a.m. daily. In rowing, you quickly learn that success depends on everyone doing their role.

Heres a list of Seattle rowersuntil the advent of Title IX, mostly menand where they are now.