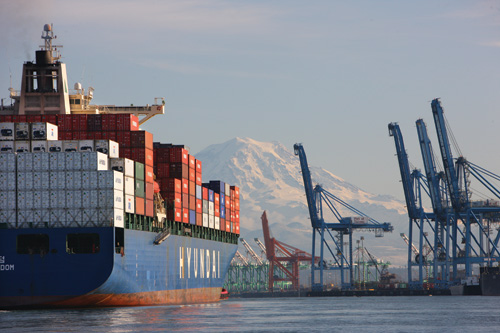 For the most part, the state of Washington has been a bit player in the oil-and-gas revolution remaking the United States economy. The state has no commercially viable deposits of oil or gas. It has no petrochemical complex fed by those fuels. While a handful of firms supply components and parts to the industry, its not a center of oilfield provisioning and equipping. About the most notable impact has been the expansion at the states oil refineries to accommodate a surge in rail-car traffic.

But that may be about to change in a big way to the tune of as much as $5.4 billion in investment.

A consortium of Chinese investors and agencies has proposed building three plants in the Pacific Northwest to convert natural gas to liquid methanol, which would then be shipped to China as a chemical-production feedstock. One of those plants is proposed for the former Kaiser Aluminum smelter site at the Port of Tacoma. Another is slated for the Port of Kalama, on the Columbia River in Cowlitz County. A third is planned for just across the Columbia at the Port of St. Helens Port Westward industrial development near Clatskanie, Oregon.

NW Innovation Works, the consortium proposing the plants, told a Port of Tacoma commission meeting at which a preliminary lease was approved that it will start with a feasibility study that could take up to 18 months. That would be followed by a three-year construction phase, with operation to begin in 2019. Proposals for the other two plants follow roughly the same calendar.

Construction wouldnt end there. NW Innovation Works says each of the plants could be quickly expanded. Total investment per plant if the expansions are included: $1.8 billion.

Thats not the only eye-popping number being tossed around by NW Innovation Works. Construction could mean as many as 1,000 jobs over three years, and 120 to 200 jobs each during operations. Aside from the direct impact of those additional jobs and the leases of port properties, the affected cities, counties and states stand to gain millions of dollars in tax revenue.

No wonder, then, that economic development officials are so gung ho on a project that seems to have dropped into their laps.
I dont want to miss on this, says Port of Tacoma Commissioner Don Meyer. (The port stands to benefit not only from putting an idle property back into revenue-generating mode, but also from a diversification of its cargo mix at a time when container volumes are under pressure.)

This could be an enormous boost to our economy regionally, increasing the tax base and providing many above average wage jobs for years to come, says Cowlitz Economic Development Council President Ted Sprague about the Kalama project.

Even better, the state, including Governor Jay Inslee, is fully on board. Thats no minor consideration given the perception that Inslee is no fan of other types of energy export facilities, especially for coal and oil.

As the global transition to a clean energy economy accelerates, so does our states ability to attract new, family-wage jobs throughout Washington state, declares a news release from Inslees office on the Port of Kalamas approval of a lease with NW Innovation Works. I have instructed my Department of Commerce to continue working with the Port of Kalama and the company on this opportunity.

The difference in reception is due to the nature of how the raw material will be delivered, and what goes out. NW Innovation Works proposed plants will take natural gas by pipeline. That eliminates one of the controversies associated with proposed oil and coal export terminals no increase in truck or rail traffic and, thus, no congestion and no safety or pollution worries from such increases.

The export of American energy has also touched off debate on multiple grounds. Domestic industries that use natural gas, for example, want the resources for themselves; environmentalists dont like coal consumption anywhere, here or abroad.

NW Innovation Works spokeswoman Charla Skaggs says the proposed plants arent really part of the energy-export debate. Were not exporting natural gas, she said. The plants are part of a value-added manufacturing process. Methanol is not the natural resource in its raw state.

Even more appealing, at least for the state and backers of the plant, methanol exports will be displacing as a feedstock a much dirtier fossil fuel coal.

NW Innovation Works backers include the Dalian Xizhong Island Petrochemical Park in northeast China, which would receive and use the methanol; the Chinese Academy of Science, a ministry-level agency of the Chinese government; and H&Q Asia Pacific, a Silicon Valley private equity firm.

Chemical manufacturers in China want the methanol, also referred to as wood alcohol or wood spirits, as a raw material for the production of olefin, a component in a vast array of plastics, including carpet fibers, consumer-electronics cases and water bottles. Swapping methanol for coal, NW Innovation Works says, could cut carbon emissions by as much as 70 percent.

Chemical production centers like Dalian, with the encouragement of the Chinese government, are committing to the conversion in a big way. NW Innovation Works says its not proposing three plants as a hedge should one or two fail to make it through permitting. It wants all three. In fact, NW Innovation Works Vice President Joe Smith told the Tacoma Port Commission Dalian alone needs six to eight of these facilities to fill their needs. … Its not an either/or,, its an and.

The proposed investments in Washington state represent just one part of a national renaissance. Methanol plants along Texas and Louisianas Gulf Coast that went dormant a decade ago when gas prices soared are now being restarted, while new plants are popping up to exploit cheap natural gas and supply strong demand from China. North American methanol production is expected to rise 26 percent by 2020, according to The American Oil & Gas Reporter.

For all the enthusiasm, theres still a long way to go and a lot of questions to be answered. The natural gas supply, for example: Is there enough?

Theres plenty of gas, says Dan Kirschner, executive director of the Northwest Gas Association. The region can draw from supplies in both the United States and Canada. The question is infrastructure capacity. At full production, the plants would impose a considerable increase in the regions demand, likely necessitating pipeline expansion.

For the communities, safety and health will be huge issues. That was in evidence at the Tacoma Port Commission meeting at which the lease was approved. Several residents of the Northeast Tacoma neighborhood less than a mile from the plant site objected to both the lack of notice about the proposal and the dearth of information about the safety, environmental and health records of such plants. One resident called on the port to reject it outright. It is absolutely not right to put this plant in such close proximity to a highly and densely populated area, she said.

State Senator Jeannie Darneille, DTacoma, says the plants backers made missteps early on in terms of community information and outreach. There has to be a way for us to openly discuss the concerns that have been so eloquently expressed today, she told commissioners.

But commissioners also heard from representatives of labor, endorsing the project not only for the jobs but also the training opportunities for future employment. The port must not pass up the chance to bring good middle-class family-wage jobs to Tacoma and Pierce County, says Mark Martinez, executive secretary of the Pierce County Building & Construction Trades Council. Adds Darneille: This is definitely the project everyone wants to love.