Back to the Future: Storage Units 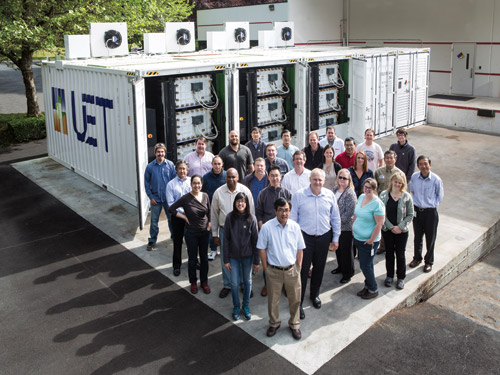 Coming up with great ideas for technology and companies does not drive the regions economy. Turning those great ideas into products that someone will actually pay money for is what propels the economy.

Both utilities planned to test the battery systems in backing up renewable energy sources like wind and solar. We can tap into battery storage power almost instantaneously, which provides flexibility to quickly react to a sudden drop in energy supply or an increase in demand, says Don Kopczynski, Avistas VP of energy delivery. This rapid response time can help manage fluctuations that have made it challenging to integrate renewable energy onto the grid until now. We look forward to validating if battery storage technology could be the missing piece to this puzzle.

Since then, UniEnergy has recorded a sale in California and completed a project in Germany. Since last May, the company has generated more than $10 million in sales of systems with a total output capacity of 4 megawatts.

More could be coming soon, says Russ Weed, UniEnergys VP of business development and general counsel. The firm is working on prospects in California, Hawaii and Ontario.

A convergence of forces is driving adoption of UniEnergys technology at a pace thats rapid for an industry normally known to move slowly and cautiously because of regulation, the complexity of the electric grid and the huge sums of capital required. Market forces are shaking up the typical inertia, says Weed.

Regulatory change encouraging or pushing utilities to add renewables to their generating portfolio is one of those forces. So is a shift in philosophy of how the grid is designed from a hub-and-spoke system with big generating plants at the hub to a networked model of distributed generation. So is the development of technologies to make managing a smart grid possible while keeping the lights on. It also helps that a lot of investment capital has been looking for a place to go to work, and in the post-financial-crisis era, one of the more attractive sectors has been energy technology.

The grid, Weed adds, is becoming like the internet. Just like you cant have the internet without data centers, you cant have a smart grid without grid-scale energy storage.
And thats good news for UniEnergy, which had just two employees when it was launched in 2012. Today it employs 50.

UniEnergy was never technically an R&D company, Weed says. Its mission from the start was to take an existing technology in this case, a method developed at Pacific Northwest National Laboratory in Richland and convert it to a commercial product. That still required considerable work, configuring the technology into a commercial product, building manufacturing operations, establishing sales channels and getting potential customers interested in UniEnergys systems.

The work isnt finished. Even as UniEnergy markets its first model of storage battery, its developing a second that should hit the market by the end of 2015, Weed predicts. Itll be a smaller product 50 to 100 kilowatts versus 500 megawatts for the initial systems and will come in a single 20-foot container, compared with five for the larger product. It will also be aimed at a different market. While the systems UniEnergy sells now are aimed at utilities and independent power producers, the next edition will be intended for commercial buildings, industrial complexes, microgrids, remote facilities and military installations.

Knowing the differences between markets and how to tweak systems to match demand is part of UniEnergys transition from the development stage to a fully commercial company.
You cant be everything to everyplace, Weed says. Some places are medium to long-term opportunities. He cites South Korea as an example of a market that could be huge but is waiting to see how storage-battery technology works out in North America. You cant blow [those markets] off, but you cant be distracted by them, either.