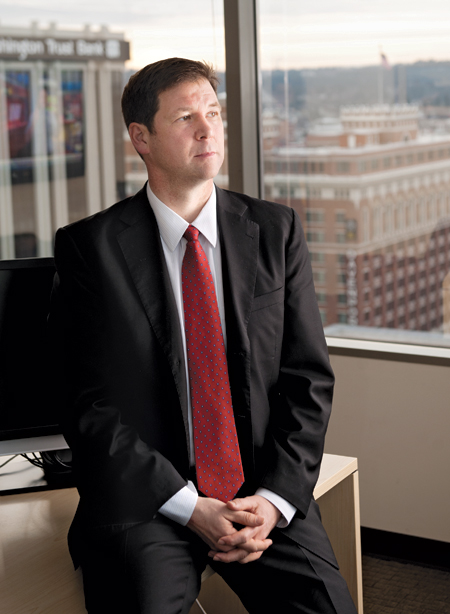 Though home to several technology firms, Spokane is light-years away from being a Silicon Valley or a North Carolina Research Triangle or a Boston Route 128. But Washington states second-largest city does have something those hotbeds of intellectual property do not have: the nations No. 1 patent law firm overall in all industries. Far from the nations biggest tech centers, Lee & Hayes has built a patent law powerhouse with nearly 40 lawyers serving clients such as Microsoft, Hewlett-Packard, T-Mobile and General Electric.

Lee & Hayes is based in Spokane because co-founders Lewis Lee and Dan Hayes, both electrical engineers with software experience, were raised in eastern Washington. When they decided, after working at a small local law firm, to launch their own patent law practice in 1994, they didnt want to leave the Spokane area. Yes, Lee says, It was the end of the earth for patents. But that didnt deter them.

Location hasnt been a liability because of several strategiesmost important, the firms approach to patents. Many boutique patent firms focus mostly on the law. Lee & Hayes focus is broader, extending to include how a clients patents fit into its overall business strategy. When drafting the claims on which a patent will be based, the firm considers not just the need to protect the patent holder; it also factors in clients and competitors business strategies, both present and future. The sweet spot for our firm is the intersection of business, law and technology, Lee explains.

Consistent with this approach, Lee & Hayes limits its client base primarily to a select group of companies that have a leading position in the marketplace. (The firms customers develop technologies, products and services for many different fields, including computer software/hardware, electronics, network technologies, semiconductor technologies, digital media, business and financial services, mobile and e-commerce, telecommunications, aerospace, medical devices and biotech.) We want to learn what a companys goals are, where they want to get into the marketplace and who their competitors are, Lee says. If you represent lots of clients, you cant know their business practices well.

This business-centric approach explains why Lee & Hayes received that No. 1 ranking. Normally, patent law rankings are based on the quantity of patents obtained. But this ranking, commissioned by Intellectual Asset Management magazine, focused on patent quality, with quality determined by the likelihood a patent would be maintained for the full statutory term of 20 years. The rationale for this metric: More than half of all American patents are abandoned before the 20-year term because the value of the patents dont justify the stiff maintenance fees needed to keep them in effect.

Two other strategies have helped Lee & Hayes lead the field. First, the firm invested heavily in docketing and reporting systems that streamline its practice. Second, nearly all the firms patent work, which involves prosecuting (which means obtaining) patents, is done on a fixed fee agreed to at the start of a project rather than on an hourly basis, as is the case at many other law firms. There are never any surprises, Lee says. Our billing approach is a welcome change. At least thats what were told by clients.

Leading the firm is the 46-year-old Lewis Lee. Lewis is a good lawyer and strategic thinker. He can go in and help a client, [pointing out] here is what you should be patenting, notes Chun M. Ng, a patent lawyer at Perkins Coie. Ng has worked with Lee on Microsoft patent issues.

According to Mauricio Uribe, a patent lawyer in Seattles Knobbe Martens, The reason Lewis generates trust in clients is because he takes this business-centric approach.

Lee is entrepreneurial, too. Hes always developing tools or trying to figure out how to better serve clients, says Uribe. Take IP Street, a new company Lee & Hayes is looking to spin off. Its mission is to become a trusted source for information, known as analytics, needed to value patents and other intellectual property (IP). At many companies, Lee says, IP is the largest asset, but theres no feel for how you value it, so people are trying different models.

Louis Carbonneau of The Point Law Group in Seattle reports that hes increasingly contacted by Wall Street investors clamoring for the kind of information IP Street is supposed to deliver. The IP Street idea is good [but only] to the extent people are willing to pay for its services, he says.

Like many law firms, Lee & Hayes felt the pinch of the recent recession. In 2009 and 2010, the firm downsized its patent practice, which accounts for at least 85 percent of the firms legal work by about 15 percent. But during the same period, it started life sciences and corporate practice groups. And Lee & Hayes is hiring lawyers again.

The firm doesnt litigate patent disputes, but that could change. In terms of generating law firm revenue, patent litigation is expected to grow faster than patent prosecution. One reason is the rise of patent trolls, the pejorative term for individuals and companies holding patents they have no intention of using other than to generate revenue by enforcing the patents against others. Will Lee & Hayes start a litigation practice? We think about it quite often, Lee says.

The firm also thinks about opening more offices. It currently has additional locations in Seattle, Austin, Taipei and Beijing. As for further expansion, theres nothing definite yet, Lee says. But our strategic plan calls for more growth, and our infrastructure can support it.