When might the Sonics return to Seattle? Would you believe 2025? 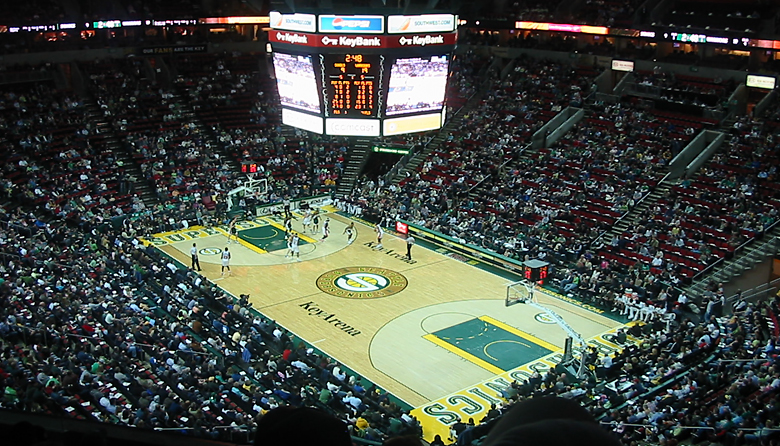 The scene at KeyArena for the final game played in the former home of the Seattle SuperSonics before the arenas two-year, $700 million reclamation project confirmed what most sports fans in Seattle already knew: The city deserves an NBA team.

The October 5 preseason game brought former Sonic Kevin Durant back to the place where he played his first NBA season a decade earlier. He returned as a member of the Golden State Warriors, the reigning league champion, who played the Sacramento Kings, a team that came close to relocating to Seattle a few years ago.

Everybody in the basketball world and the NBA knows the Sonics need to be back in Seattle, Durant said during the week leading up to the game. As if to buttress his argument, the sleeping giant that is the Sonics fan base awoke in full force. As well, legends from both the teams storied past and the citys wealth of home-grown talent led the way in letting the NBAs front office know Seattle is more than ready for NBA basketball to return.

But, realistically, how could that happen? While the way seems clear for Seattle to land a National Hockey League expansion franchise in two years, what is the real path forward for the new Seattle Sonics to begin playing games in the next incarnation of the arena at Seattle Center?

The two ways the Sonics could return are via relocation and expansion, but prospects for relocation have greatly diminished in recent years. The Sacramento Kings came tantalizingly close to moving here in 2013. The Milwaukee Bucks also loomed as a relocation candidate Steve Ballmer, now the owner of the Los Angeles Clippers, told Bill Simmons of The Ringer that he offered to buy the Bucks and move them to Seattle when the franchise was up for sale in 2014 but former owner Herb Kohl stipulated that any group buying the team had to keep it in Milwaukee. Both teams now have new arenas.

Other possible candidates for relocation the Memphis Grizzlies, Minnesota Timberwolves and Charlotte Hornets were rendered unlikely by upgrades to their respective arenas.

The only real relocation candidate in the NBA now is the leagues lowest-valued franchise at $1 billion the New Orleans Pelicans. Former Pelicans owner Tom Benson, also the owner of the New Orleans Saints, died last March. His widow, Gayle Benson, is now in charge of the team, which in 2012 signed a deal for a publicly funded renovation of their arena, currently known as the Smoothie King Center, which would keep the team in New Orleans until 2024.

A decade after the Sonics left Seattle for Oklahoma City, the NBA has learned that relocations can get ugly and the league has aggressively worked to stop teams from moving. The league prevented former Pelicans owner George Shinn from moving in the wake of Hurricane Katrina and subsequently bought the franchise from him before selling it to Benson in 2012. It seems unlikely the NBA would look favorably upon a move by the Pelicans, even though New Orleans is the 51st-largest media market in the United States and Seattle-Tacoma has risen to No. 12. So, while a relocation of the Pelicans cant be ruled out entirely, if it were to happen, even an optimistic timeline wouldnt bring a team to Seattle until the mid-2020s.

This leaves expansion as the likeliest route to landing a team. As a brand, the NBA is thriving, generating $7.4 billion in revenue last year, up 25 percent from the previous season, according to Forbes. The 30-team league has also conquered social media unlike any other sport. The talent level is at a high-water mark, and one could argue that the league is readier now to bring on two more franchises than at any point in its history.

But Commissioner Adam Silver has not entertained the idea, going as far as to say plainly during a press event during the playoffs last year, Expansion is not on our agenda right now.

In an August 2018 ESPN report on expansion in American professional sports leagues, reporter Brian Windhorst also threw some cold water on Seattles aspirations for a new Sonics team, saying the KeyArena renovation isnt viewed quite as favorably by the NBA as it might be in Seattle and that the league could have expansion to Mexico City higher on its priority list.

There may be some truth in that assessment, but it makes sense for the NBA to take a position on the renovation, which is being done in anticipation of an NHL team but is also designed for an NBA club. As it does with any other arena, the NBA is going to want to have a say in how its product is presented, and it stands to reason the league would benefit by using its position on the arena as a bargaining chip to get what its looking for when the time comes to discuss expansion in a realistic context.

So, when would that discussion occur?

The earliest time, though an unlikely one, would be 2022. The league is considering abolishing its one-and-done rule that requires potential players to spend at least one year in college. Many top-notch high school players could declare themselves eligible for the draft that year, dramatically expanding the talent pool and possibly providing sufficient impetus for expansion.

A more likely scenario, however, is that expansion will not occur until after the 2024-25 season, when the NBAs nine-year, $24 billion television and media rights deal with ESPN and Turner Sports is scheduled to expire. Asking 30 ownership groups to accept smaller slices of the revenue pie before they have an opportunity to renegotiate the TV deal seems completely unfathomable.

So, basketball-starved fans might end up waiting close to 20 years until they can cheer on their team once again. Bear in mind that since 2000, seven professional franchises one in baseball, one in hockey, two in football and three in basketball have relocated. Only one of the spurned cities Charlotte, North Carolina has regained a team.

Of course, Seattle deserves an NBA team. That Friday night game in October left no doubt. But, barring a miracle, Seattle is going to have to wait several more years. We can only hope the experience doesnt become the sporting equivalent of Waiting for Godot.

How Long Does It Take?
By John Levesque

Seattle has been waiting 11 years for a new NBA team. It waited seven years between losing the Pilots baseball team and welcoming the Mariners. Heres a look at how long other cities have waited after losing professional sports teams. The new teams names are in parentheses. Entries in italics indicate an existing team moved from another city. Entries in roman type indicate the city acquired an expansion franchise.