The Woman Behind M3 Biotechnology 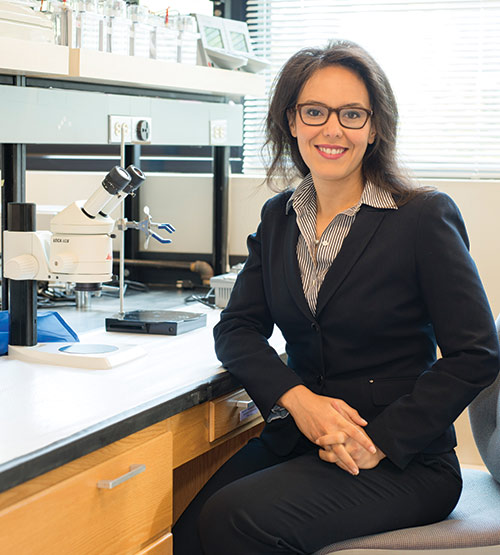 At 30 years, Leen Kawas is president and CEO of a drug startup tackling diseases of the brain that have confounded far more experienced executives. An immigrant from Jordan, Kawas came across the research while pursuing her doctorate at Washington State University and boldly decided to take it to market.

In conversations, shes charming and funny yet cuts through small talk like a chainsaw, getting straight to the point. Her company, M3 Biotechnology Inc., is also chewing through obstacles. The indefatigable CEO has been traveling the country meeting with prospective investors. At a recent Philadelphia conference, she delivered a speech and granted 45 interviews, helping to overcome much of the skepticism about her company. As of mid-September, she had raised $7 million.

What draws investors is M3 Biotechnologys flagship compound, MM-201, which shows promise in stimulating diseased lab rats to repair brain cells. In animal models of Alzheimers and Parkinsons, the compound reverses both cognitive and motor deficits. But big hurdles lie ahead of this big ambition.

Among those obstacles is designing clinical trials to prove the compound works. Alzheimers and Parkinsons develop slowly, over years. The underlying biology of Alzheimers remains controversial. How long would trials have to follow patients to see improvement? Since early stages of Alzheimers include subtle changes in memory and personality, how would trials measure the slowing of such subtle decline? Parkinsons may be a slightly easier target because of its characteristic tremors. Slowing the advance of these tremors might be a metric.

There are major, major challenges here that cause most venture capitalists to pause, says Luke Timmerman, founder and editor of The Timmerman Report, a publication devoted to biotech. Only the big pharma or big biotech companies can take a drug candidate very far when the hurdles are this high.

Yet with the human and financial cost of neurological diseases so high, some important players have stepped in to support M3. They include the highly regarded Michael J. Fox Foundation, named for the actor who suffers from Parkinsons disease. The foundation gave M3 an early grant as part of a partnering program to help the small company find its way. The state of Washingtons Life Sciences Discovery Fund also provided grants totaling $750,000. Mark Hertle, a science adviser at the fund, says those judging the grant applications saw great promise in both M3s science and Kawas ability to drive the company forward.

Her energy and persistence are absolutely essential, Hertle asserts.

Joseph Harding and John Jay Wright, both professors at WSU, are the cofounders of M3. Their long years of research paved the way for the discoveries that M3 will try to exploit. Hertle points to the whole team as earning respect and confidence from investors.

Eventually, Kawas plans to partner with a major pharmaceutical company to finance the expensive clinical trials in human patients that lie ahead. But M3 will file an Investigational New Drug application with the Food and Drug Administration (FDA) and ask for fast-track status before seeking a partner.

With approval from the FDA, M3 would start human safety trials of the compound MM-201 in the latter part of 2016. The small dose would be taken orally, unlike more expensive therapies that are administered by injection or other means. If approved for Parkinsons and/or Alzheimers, the potential market numbers are dizzying. An estimated half of all baby boomers are expected to have Alzheimers by their 85th birthdays.

Analysts estimate the U.S. market for an AstraZeneca compound targeting Alzheimers is $5 billion. Others looking at the market for neurological diseases include Eli Lilly and Company, Biogen and Johnson & Johnson.

Although less than one percent of Alzheimers treatments made it to market between 2002 and 2012, Kawas figures she has a better shot at emerging successful than her competitors, none of whom are offering a simple pill taken by mouth.
We expect the drug will dominate the disease-modifying therapeutics market, says Kawas. We expect to become the standard of care for physicians and patients.

Her steely confidence held an audience at the Life Science Innovation Northwest conference sponsored this past summer by the Washington Biotechnology & Biomedical Association. While she was honored to receive one of the Women to Watch awards at the event, she disapproves of labeling people by their sex. I wish we had a Men to Watch award, she quipped.

Kawas earned an undergraduate degree in pharmacy in Jordan before deciding to pursue her doctorate in the United States. She says she had her pick of universities, including some from the Ivy League. She remembers WSUs Pullman campus and its friendliness cast a spell over her.

It was summer and everything was so green. I talked to Joe [Harding] and he created so much excitement. [Talking about his research,] I felt it was the perfect fit for me, she recalls.
Kawas received her Ph.D. in molecular pharmacology in 2011. Her focus now is mostly outside the laboratory as she steers the startup through regulatory hurdles and capital generation. Her role is to keep M3 lean and to partner with others to do contract work. Those others include Oregon Health & Science University in Portland and Swedish Medical Center in Seattle.

While MM-201 is the first compound in the pipeline, Kawas says M3 has seven patents for different families of compounds, including four she described as being close to the stage of MM-201. When M3 Biotechnology partners on its flagship compound, she says, this development will free up money to finance the other compounds in the pipeline.