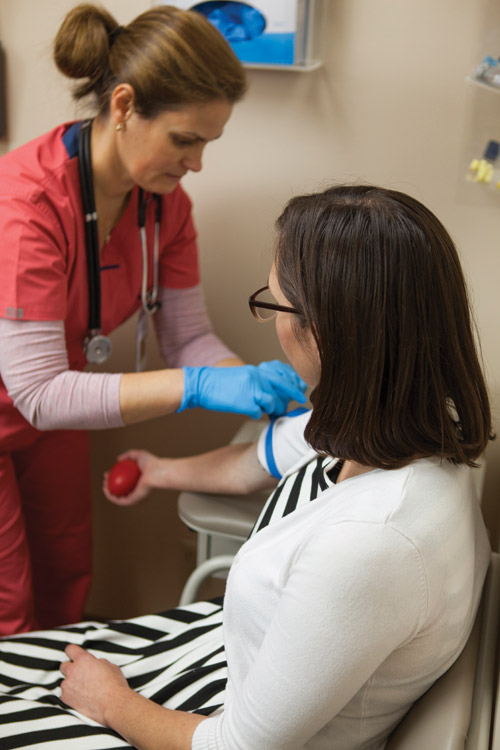 Vera Whole Health, which began life in 2008 as a Seattle fitness studio for women, has since morphed into a provider of onsite and near-site health clinics, including one that serves the 5,850 employees at Seattle Childrens.

Just as the company envisioned with its fitness studio, says Vera CEO Ryan Schmid, Our goal is to help people become healthier. … We just have a dramatically better delivery method.

The idea of these clinics, which help employers save money while improving the health of their workers, is gaining traction. Today, Vera Whole Health has 50 employees and four clinics; it expects to open six more by next spring, including operations in Ballard and South Lake Union and for clients such as Trident Seafoods.

In September, Vera Whole Health announced that Seattles Virginia Mason had made a strategic investment in Veras latest round of funding, which raised $5 million. This comes on the heels of a collaboration between Vera and Virginia Mason announced in December 2013. Vera now uses Virginia Masons evidence-based criteria to inform diagnoses and refer patients to appropriate specialty care providers.

Onsite clinics have their history in industrial settings, where workplace injuries were common. Today, onsite and related near-site clinics vary in their approaches and the populations served. Nationwide, about one-third of companies with 500 employees or more offer onsite clinics, a proportion that has remained stable for the past five years, according to Mercer, the human resources consulting firm.

Here in Seattle, however, there has being growing interest in using clinics to provide primary care. Qliance Medical Management, for example, has close to 90 employees and runs a near-site clinic for Expedia employees. The Qliance model differs from Veras in that people from the community, and not just employees, may visit the clinic. A flat fee or subscription will allow a patient unlimited access to providers at any of the companys six clinics.

The benefits to that are that if someone changes jobs, they dont have to also change their doctor, says Erika Bliss, a physician and president and CEO of Qliance. Qliance and Vera are cut from the same cloth, but are addressing separate problems in the health care system.

Iora Health, a national health care company, recently opened two clinics in the Puget Sound region that serve seniors covered by Medicare. As with Vera, patients work with a medical doctor, a nurse and a health coach.

While Vera is a new entrant, it is seeing strong demand for its services. In the first eight months of this year, more than 30 companies expressed an interest in working with Vera, up from just one last year. Some of the proposals would include serving firms with up to 50,000 employees.

One reason for Veras appeal may be the results it has shown in its partnership with Seattle Childrens. Vera opened its Springbrook clinic across from Childrens main campus in May 2013. Childrens paid the startup costs and pays a monthly fee for each eligible employee. Employees of any Vera client can visit Springbrook or other Vera clinics an unlimited number of times to receive primary, preventive, acute and wellness care. They can visit the clinics even as they continue to visit their primary physicians and receive other health care benefits. Visits typically last from 15 minutes to an hour and the clinic has common medications available for patients to take home.

In the clinics first year at Childrens, about 40 percent of employees chose to use it, including more than half of the institutions high-risk employees. That compares to a 15 to 20 percent participation rate that is standard at workplace clinics, says Mary-Clayton Enderlein. Director of occupational health services at Seattle Childrens, she had a vision of creating an onsite health and wellness center since arriving at Childrens five years ago and worked with other members of the human resources team to make it happen.

In spite of the large number of high-risk employees who used its services, the clinic still cost Childrens about $90 a month less to serve those employees than to serve those who did not use the clinic, according to a recent Childrens study. The employees using the clinic also experienced about 80 percent fewer hospital days. Childrens total claims dropped by a half-million dollars during the first full year with Vera and the hospital says the clinic has generated a total saving of $1 million.

The Childrens clinic has offered other important advantages. At least 100 patients who used Vera were diagnosed with previously undetected conditions, such as hypertension, diabetes, hyperglycemia, prediabetes, blood clots and precancerous conditions. In cases such as these, the early detection and treatment kept people healthier and saved money. When people are healthier, get better sleep and remain emotionally balanced, they tend to have fewer workplace accidents, thereby reducing the cost of workers compensation and allowing employees to be at work more, says Enderlein.

One of the key services available at Veras clinics not typically available in hospitals is face-to-face, personalized health coaching. Employees can meet with a health coach to develop goals and an action plan for how to make positive changes. Seattle Childrens highest cost from a claims perspective are anxiety, depression, dyspepsia, musculoskeletal low back pain, diabetes, hypertension and hyperlipidemia. Obesity often occurs in conjunction with several of these diseases. And one way that Veras approach using integrative primary care and coaching effectively drives down costs is by helping patients address weight issues.

While doctors and nurses are paid to provide answers to medical questions, a coachs role is to listen empathetically and help people find solutions within themselves, says Vera cofounder and CEO Schmid.

Most of us get beat down plenty in life, Schmid explains. Heres a place where people can be fully supported.
Schmid tells the story of one woman who had been slowly gaining weight for a decade. She came in for coaching and set a goal to lose 20 pounds in six months. When she lost only 18 pounds, she was discouraged, but the coach pointed out what a tremendous success it was, and the patient went on to lose 20 more pounds.

Vera dietitian Bob Summerford says one patient wished to lose weight but felt the time wasnt right because he had such a stressful work life and was often busy with after-work social engagements. After coaching, he realized he was often eating at the social functions even when he wasnt hungry. He learned to reduce portion sizes and tune in to his bodys signals of hunger and satiety. He also found ways other than snacking to wind down after a stressful day. With these simple changes, he lost 15 pounds in two and a half months.
You make it a priority and when you carve out that time, it really works, says Summerford of the coaching sessions.

Enderlein, who has a masters degree in public health and a doctorate in nursing practice, says when she arrived at Childrens, the hospital system was faced with an annual 12 to 20 percent increase in the cost of providing health benefits to employees. She pushed for the onsite clinic, she says, because she was convinced that having convenient, free health care for employees in addition to their regular health benefits would help provide affordable health benefits for an aging workforce.

She partnered with Tom Stoeckle, director of compensation and benefits, to develop the idea of an onsite clinic further. Enderlein and her team realized that having a third party run the clinic would reassure employees that their personal information was confidential that their employer didnt have access to it. Once Childrens decided to buy it rather than build it, Enderlein and her team did a national search before settling on Vera as the provider.

I wanted to collaborate and get my hands dirty, says Enderlein, explaining the decision to choose a company with relatively little experience in the field. In the spirit of inquiry, I wanted to cocreate this, make it a national model.
Working with Childrens, Vera set up a Whole Health Council with nearly 20 people representing all areas of the hospital, from executives to frontline workers. The council developed a vision statement and formed a hiring subcommittee with power to hire the clinic staff. Another important job of the council was to create an organizational culture of health and well-being for example, ensuring that supervisors allowed staff to use the clinic during office hours, Schmid notes.

Before the clinic opened, Vera and Childrens staff analyzed aggregate health care data provided by the hospitals insurance broker. This allowed them to determine the most common health concerns for the population as well as the most prevalent medications used.

One recommendation of the Whole Health Council was to improve use of the clinic by late-night staff. Vera and Childrens also were surprised to discover about half of the hospitals employees did not have a primary care provider or had not seen one for appropriate care, Schmid says. After a year, a majority of patients who had visited the clinic had decided to use Vera for their primary care, he adds.

Schmid says the Vera model is best for companies that self-fund their benefit plans. To make it work, a clinic needs about 3,000 patients. Since many companies dont have that many, Vera has begun to serve smaller companies that share a clinic. The first one is located in Seattles Chinatown-International District near Union Station. The monthly fee depends on factors such as the type of services offered, but typically ranges between $40 and $65 per person.

As the effort to rein in health care costs intensifies, different approaches will also proliferate. Where Qliance is building
a network of community-based clinics to address access and affordability for everyone, Qliances Bliss points out, Vera
is addressing the rising cost of health care and affordability for employers. And, from Enderleins perspective, Veras clinic at Seattle Childrens has been a huge success. Shes pleased because the hospital is saving money, employees are healthier and Veras patient satisfaction surveys consistently come back with high marks.

Schmid sees a growing market for Veras model in spite of competition from such companies as Qliance and Iora Health. I think were all so early and fighting against such tremendous yestercare inertia that we all share in one anothers successes, says Schmid, who is making plans to extend Veras service to other states.