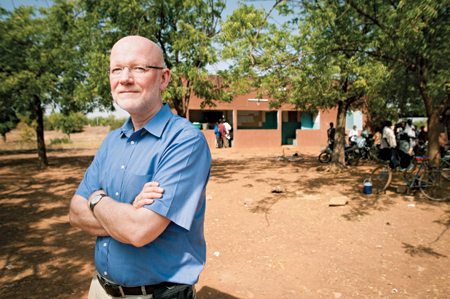 PATH, under the direction of president and CEO Christopher Elias, has harnessed modern science and engineering to develop practical, affordable solutions for health problems in the developing world, where each year millions of people die from preventable diseases.

Tailoring culturally appropriate, affordable and sustainable solutions requires a great deal of work and creativity. Recently, for example, PATH partnered with the World Health Organization (WHO) to fight a meningitis strain that has devastated millions of people in Africa. The partners searched for possible vaccine candidates and found a technology that the Food and Drug Administration had developed. Through the Meningitis Vaccine Project, PATH helped negotiate rights to the innovation for token royalties and licensed the technology to the Serum Institute of India so the organization could manufacture it at one-tenth the typical cost.

In December 2010, the first people in Africa received what is called MenAfriVac. Estimates are that millions will receive it within the next few years. As in this case, PATHs activities often require solutions that tap the talents and scale of governments, private companies and international organizations, such as WHO. We had nothing, explained the leader of the PATH vaccine partnership, Marc LaForce, M.D. Our challenge was to translate that nothingness into a product.

PATH has advanced many other innovations, about 85 different technologies, in its 30 years working for global health. One of them is a sticker for vaccine vials that indicates when they may have been spoiled by heat. The company has used such innovative techniques as street theater and comic books to encourage discussion of taboo subjects such as AIDs in an effort to discourage behaviors that contribute to the spread of the disease. The organization has also developed simple, affordable birthing kits that are distributed through womens cooperatives in Nepal, and has done a great deal of work on womens condoms now widely used by prostitutes in South America.

The organization, headquartered in the South Lake Union neighborhood, has about 900 employees in offices in 30 cities in 21 countries.

Back in 1976, when research on infectious disease in the United States was rare and few used the term global health, Ken Stuart brought together the best and brightest to find cures for international killers. The first in South Lake Unions global health hub, Seattle BioMed researchers recently began human clinical trials for a malaria vaccine and discovered a trigger for latent tuberculosis. Meanwhile, the institutes training programsincluding BioQuest for high schoolersreadies the next generation of global health scientists.

A global leader and partner in the effort to eliminate corneal blindness, SightLife is a nonprofit corneal transplant recovery and distribution organization. A recipient of the Washington Evergreen Award, SightLife creates turnkey eye bank systems, providing important access to donated corneas in many areas of the world. Organizer of the first international eye bank development meeting in Seattle, in 2009, with 26 different countries in attendance, SightLife is affiliated with the UW School of Medicines Department of Ophthalmology and other academic institutions around the world.