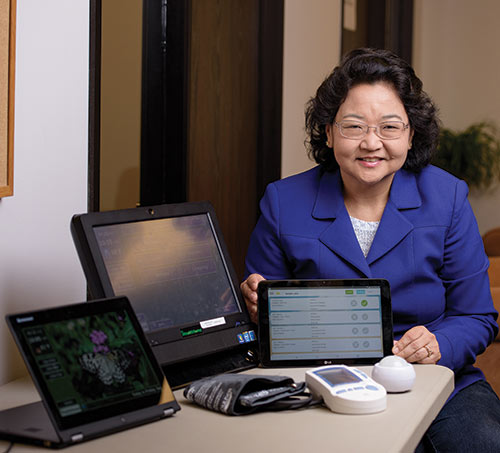 Taking care of an elderly adult living at home is a challenge. Increasingly, those duties fall to a number of people, including home-care workers, doctors, therapists and relatives. Is Grandma eating right? Is she taking her pills? Whos taking her to the dentist?

How do you coordinate all those activities while ensuring nothing is forgotten? A Seattle company called iHealthHome offers software that makes it easier to manage elder care. When Grandma stands on the scale or has her blood pressure taken, the information goes straight via Bluetooth into her profile, where it can be seen by her health care provider. If a grandson stops by and finds Grandma is refusing to eat, he can use a mobile app to upload the information. If someone else visits three days later and she still isnt eating, that information is suddenly important and easy to track.

Its also easy to customize. If Grandma doesnt want her son to see how much she weighs, he wont have access to that information, says Dew-Anne Langcaon, CEO of iHealthHome.

The software can be delivered on virtually any kind of computer device. Caregivers typically gain access from a smartphone app. In beta testing is a feature that allows a caregiver to order a car to take Grandma to a doctors appointment at the touch of a button. Grandma can get the software on an iPad or computer with a friendly interface that also makes it easy for her to play games, surf the web and Skype with family members.

The technology was developed for Hawaiis largest home-care service, which Langcaon helped found. She was frustrated by the available technology, especially compared to Hawaiis largest hospital system, where she had previously been COO. She raised $7.7 million and spun off the technology into iHealthHome, which tested the software at EvergreenHealth Medical Center and Fred Hutchinson Cancer Research Center.

Langcaon figures the service, which initially will be sold to home-care providers for about $35 per patient per month, will enable families to create a virtual village made up of numerous people to help take care of elders at a lower cost.