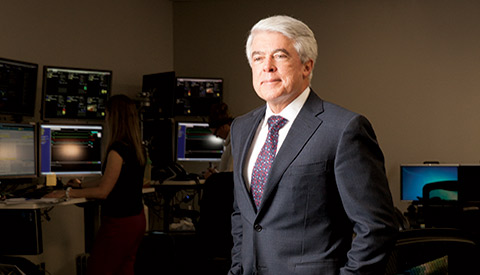 Mark Adams is a change agent. He has been the catalyst for transforming the way CHI Franciscan delivers health care improving patient access to care and advancing patient outcomes through innovative tools. He led the creation of CHI Franciscans Health and Informatics Department in 2013 and managed the successful systemwide implementation of the organizations Epic EHR system on time and under budget.

His strategy for promoting change? Focus on the why and allow the change to come from the bottom up instead of top down.

Adams subscribes to the Lao Tzu definition of leadership: A leader is best when people barely know he exists. When his work is done, his aim fulfilled, they will say: We did it ourselves.

He has been chief medical officer since 2012 and leads the strategic initiatives and coordinates the activities of three independent medical staffs comprising more than 2,000 people across eight hospitals. He also served as the executive sponsor for the design of CHI Franciscans own Virtual ICU program. In addition, he is responsible for the Rainier Health Network, a regional physician-led accountable care organization whose membership includes six independent physician groups.

As chief medical officer for Providences Northwest Washington region, Joanne Roberts faced her worst nightmare in 2014 after four patients were brought in to the Providence Regional Medical Center in Everett after a shooting at Marysville Pilchuck High School.

Under her leadership, the hospital team was ready for the trauma. Roberts, an internist who specialized in palliative and hospice care for 25 years, received her medical degree from the University of Minnesota Medical School and has been in practice for 30 years. Her passion is promoting teamwork in order to drive up safety, quality and access while driving out waste.