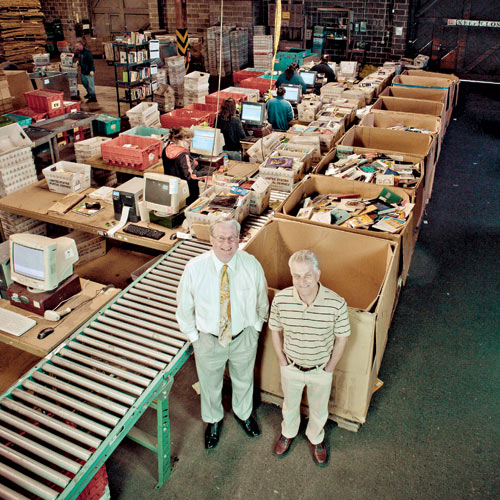 Phil McMullin and Clive Midgen, two of the founders of Thrift Recycling Management (TRM), started their business without a precise idea of where it was headed. In an effort to keep used books out of landfills, they began sorting and selling titles online in 2004. Since then, their Lakewood-based company has become the largest used-book retailer in the country, with $27 million in revenue last year. In January, TRM landed an $8.5 million investment from venture capital firm QuestMark Partners of Baltimore, and it recently acquired four companies, including Snow Lion Inc., a Denver-based book-recycling plant, and B-Logistics, also of Denver, which partners with libraries to manage their waste streams.

TRM began as a rescue operation when the founders, who used to work for Savers Inc., the Bellevue-based thrift-store chain, noticed that huge numbers of books never found their way out of the companys donation boxes. We originally were worried about the landfills, because so many books were being thrown away, Midgen says. It just seemed ludicrous that you would take things like books and throw them away. It didnt make sense. In an effort to find homes for books that would otherwise be trashed, they decided to tap into the online book market and began acquiring loads of unsold books and sorting out any titles that still had value. Eventually, McMullin and Midgen, with cofounders Jeff McMullin (Phils son) and Michael Eastman, formed TRM.

What started as a single plant with offices tucked in the front and boxes of books stacked in back has now expanded to a dozen locations across the country. The largest is in Hammond, Indiana, outside Chicago, where McMullin says a half-million books fill the building.

Each plant operates in a similar fashion: Books arrive in haphazard loads, gathered from TRMs donation bins, which it operates in any city where a plant is situated, or as overflow that a thrift store either cant sell or doesnt have time to sort. Workers scan the books using the companys proprietary software, which McMullin describes as the special sauce that makes the operation possible. Within seconds of entering a title into the system, staff can determine whether it has online value. If it does, a printer produces a label, which goes on the back of the book. TRM ships them to Amazon, where they are shelved and then sold.

The software is everything, McMullin says. Its constantly changing.

If the software rejects a book as unsalable, it goes into a box for further sorting. TRM exports some books to other countries through partners such as the Omprakash Foundation and Hands Across The Water. TRM donates childrens books to schools, teachers and public libraries. Some states provide funding for schools to build libraries but not to buy books, leaving librarians facing empty shelves. We feel strongly about making sure the books go into the hands of children who dont have the experience or the money to go buy books, McMullin says.

Books that are too obscure to donate or too damaged to use go into a box for pulp. TRM has contracts with Weyerhaeuser and other firms to haul away truckloads of books every couple of days. Those books are ground up and processed into fiberboard or other paper products such as grocery bags. Reducing the amount of books that go into pulp is Midgens primary mission. I do finance and [Midgen] does garbage, McMullin laughs. The team considers pulped books a failure and is constantly searching for other ways to keep them circulating.

The operation appears seamless, but Midgen and McMullin say theyve had to deal with many complexities over the past seven years. Some of those changes have to do with the online marketplace. Online awareness seven years ago was not at the level that it is now, Midgen says. Online book buying has become mainstream and online inventory has increased dramatically. Amazon imposes strict guidelines on its partners, measuring quality and customer satisfaction. Buyers rate a company when they make purchases; TRM aims for 98 percent satisfaction.

You can never really get to a hundred percent, says Midgen. But that 97 or 98 percent, thats the benchmark. Youve got to be good to sell the number of books that we do and be in that area.

This customer loop is life or death for us, McMullin adds. Thats a very meaningful rating.

Both agree that flexibility and a willingness to learn on the go have been key to their success. We were naive when we started, says Midgen, but the company has become much more sophisticated. We really didnt know what we were getting ourselves into. Weve had to adapt and change, and thats an ongoing process. Rising gasoline prices and changes in the postal delivery system have presented logistical challenges. Computer systems have also undergone a multitude of changes. It used to be all local servers, McMullin says, and now everybodys on the cloud.

McMullin credits an adaptable, open-minded executive team that fosters an ability to evolve quickly in a shifting environment. All our original principals are still around, which means they started with the capacity to learn and develop, he says. How we conceived of the business is only remotely related to how we execute it now. If youre not willing to learnand the market is a brutal teacherthen you do get killed. Thats been a fun partto make mistakes, and learn in the process, and realize that the market is a great teacher.

TRM expects to increase revenue 20 percent over last year; the acquisition of Snow Lion will account for about 5 percent of that increase. One of the benefits of the QuestMark Partners investment has been the opportunity to mine QuestMarks contacts and expertise. Opening doors is as important as the cash, McMullin says. We are operators at heart and not really finance people, and growing the company requires more sophisticated financing than we have done historically.

Accordingly, TRM has plenty of ideas on where the influx of cash will take the business, but Midgen says it will proceed with caution. An injection of capital allows you to put all your ideas into practicality, he says. We have to do it in a thoughtful way as opportunities arise.