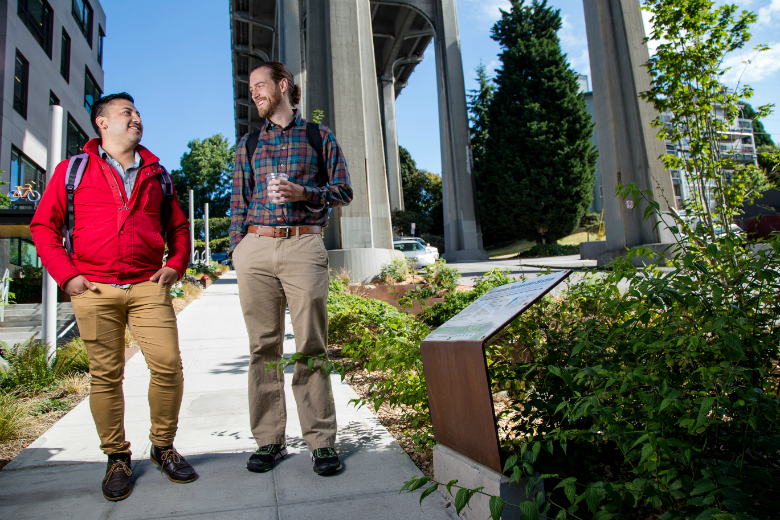 The typical commuter driving across Seattles bridges may not think about the millions of gallons of polluted rainwater that flow off into Lake Union and Lake Washington every year, but believe it or not, this stormwater is extremely toxic and flows directly into Seattles waterways during every rainfall. That means that important corridors, like the one between Lake Union and Puget Sound, attribute 75 percent of its pollutants to urban surface runoff, which is bad news for the salmon and trout that use the waterway as a critical migration route. The time has come for innovative ideas to help solve this problem.

Stephen C. Grey & Associates, a property developer and owner based in Seattles Fremont neighborhood, has come up with an innovative way to help solve one major source for urban stormwater runoff: the Aurora Bridge. And theyve partnered with private stakeholders such as KPFF, Weber Thompson, Salmon-Safe, and the Seattle 2030 District, as well as Seattle Department of Transportation and Seattle Public Utilities to pull it off. The team is designing and building a network of swales and rain gardens, which will be engineered to capture and clean the polluted water before it returns to Lake Union. Since the project takes runoff from the Aurora Bridge (public infrastructure) treats it with swales on private property and discharges treated runoff to public waterways, this kind of public-private partnership is necessary.

The project will be completed in three stages, and will contribute to the health of the regions marine ecosystem as well as provide beautifully landscaped green space near the bridge, an amenity to nearby employees and tenants.

The first phase, completed in 2017, involved creating a cascading rain garden below the west side of the Aurora Bridge and from the adjacent Data 1 building, filtering water into an underground holding vault. The second phase will implement a similar garden on the other side of the bridge, filtering bridge water and runoff from the planned Watershed building, which is currently in permit stages. The third phase is designed to be an 850-square foot bioswale adjacent to the nearby Burke-Gilman Trail. Once all three phases are complete, the project will be able to capture two million gallons of stormwater annually. Rachael Meyer, landscape architect at Weber Thompson (designer of Data 1) was quoted in a recent story in The Registry on the project: I think overall in sustainability, theres been a more recent move towards looking beyond the building site itself…An exciting trend that were seeing is the idea of looking beyond the building site to see how we can improve the community, which can be interpreted in a lot of ways from a pollution standpoint.

This partnership is a powerful example of how collaboration between private businesses and the government on infrastructure design and implementation can set an important precedent. Stephen C. Grey & Associates work with local and state government and nonprofits has resulted in effective navigation of the permitting process and ensured that design meets the communitys needs. When developers are willing to go above and beyond building and environmental codes, and are invested in a communitys future, great things can be accomplished and daunting problems can be solved.

These partnerships are not without challenges – regulatory obstacles are steep and the nature of private land ownership can pose obstacles that require creative solutions and persistence. Because the swales serve a public need, the community deserves a voice in the design and decisions. The designers of nearby buildings that recycle the water are important stakeholders, as well as on-staff experts in landscape architecture, engineering, and environmental conservation.

The fact is that the city of Seattle has very progressive codes to mitigate the effects of stormwater, so now every new project built in Seattle needs to address stormwater management. The stormwater code ensures new construction is managing stormwater on-site, but we still need private companies to take risks and innovate beyond code. Without pushing the boundaries, we will struggle to solve this problem which is negatively impacting our social and economic lives, says Steven Fry, Green Stormwater Program Manager at the Seattle 2030 District. Projects like this one provide a way to confront the modern demands of our region with an environmentally responsible, effective, and aesthetically appealing solution.

To learn more and get involved in spreading the word about the importance of these programs, visit 2030districts.org/seattle.

This content is the result of a partnership between Seattle 2030 District, Resource Media and Seattle Business Magazine, made possible through funding by Boeings charitable giving.