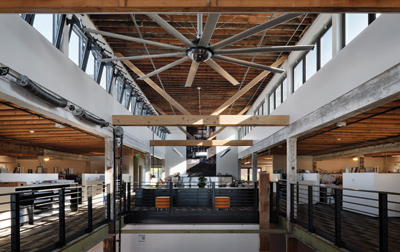 The firm, which specializes in design for the health care, senior housing and hospitality sectors, didnt simply throw money at an old building. Its designers wrapped the structure in super insulation. Passive heating and cooling as well as high-efficiency lighting and water systems reduced the buildings energy use by more than 70 percent. Existing materials were repurposed or recycled, diverting all but five percent of construction waste from the landfill. The end result? The firms efforts

created a 91-point LEED Platinum certified structurethe highest-scoring LEED certified renovation at the timefor the staggeringly low price of $105 per square foot. Among its many accolades, the building has earned the American Institute of Architects What Makes It Green? Award and the Gold Reconstruction Award from Building Design + Construction magazine.

The three-story building, administered by the General Services Administration, is among the nations most efficient air-conditioned structures and one of the first in the region to integrate geothermal heating and cooling systems within its structural piles. Radiant heating, under-floor air distribution and large windows with external shades allow users to control the internal climate. A 25,000-gallon cistern provides gray water for toilets, irrigation and water features. The center, designed by ZGF Architects and built by Sellen, reused nearly 300,000 board feet of structural timber and decking salvaged from a nearby decommissioned warehouse.Built to house the seattle District offices of the U.S. Army Corps of Engineers, the $72 million Federal Center South is situated on the east bank of the Duwamish River in South Seattle.

FHCRC employees were thoroughly educated on how to conserve the buildings power use and the results speak for themselves: The buildings data center achieved a

power usage effectiveness (PUE) score of 1.04. (PUE is calculated by dividing total power used by the amount of power used only for computing devices. A perfect score is 1.0.) The building boasts an energy use intensity (EUI) of 100k Btu per square foot per year, which is two-thirds less energy consumed than other LEED-certified laboratory buildings. And though its 45 percent lab space, 1100 Eastlake uses 30 percent less energy than a smaller, Energy Star-certified office building nearby.When it comes to inefficient structures, laboratory buildings and data centers usually rank among the worst. The 1100 Eastlake Building, which houses the Vaccine and Infectious Disease Division of the Fred Hutchinson Cancer Research Center, turns that stereotype upside down. FHCRC bought the 177,000-square-foot building in 2010 for $36 million and transformed it into one of the nations cleanest lab and data center structures. It was retrofitted with free cooling improvements that allow the building to use outside air for cooling 90 percent of the time. High-performance power-delivery systems enable the use of the right amount of power at just the right time.