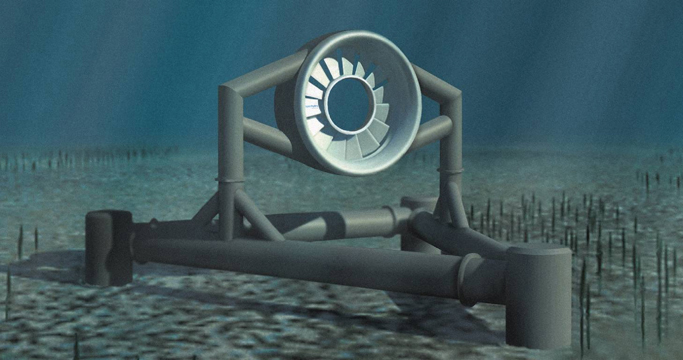 If youve ever watched the ocean during a storm, you know
how powerful it is. Surges can swallow whole chunks of the coast, leaving
disaster in their wake. Yet the real power is deep below the surface, where
tidal currents are strong even on a calm day. Two leaders of a local utility
are working hard to prove that those tides can be a clean, renewable source of energy
for local communities.

As head of Tacoma Power, Steve Klein led efforts in 2005 to
secure tidal power permits for the Tacoma Narrows. Since taking the position of
CEO at the Snohomish County Public Utility District (SnoPUD), the 12th largest
power utility in the country, he has continued to work toward making tidal
energy in the Northwest a reality. Last winter, SnoPUD submitted a preliminary
application for a pilot project in Admiralty Inlet, a channel off the western
shore of Whidbey Island. After approval from the Federal Energy Regulatory
Commission (FERC), the district hopes to file a final permit application next month
and get its license by January 2011.

In the meantime, the district isnt sitting idle. Research
partners such as the University of Washington, Beam Reach (a marine biology
program based in Seattle that takes college students on 10-week research trips)
and an orca whale advocacy and research group have been collecting data from
sites in Puget Sound for more than a year.
Were some of the first to be tapping this [field] from the academic side,
says University of Washington oceanographer Jim Thomson. With limited funding,
small companies are cautious about sharing discoveries, and most projects keep
their methods and findings strictly private. This approach means that
researchers began work with a mostly blank slate, measuring current speed and
composition, biological activity and human use at various locations.

Its breaking a new trail, absolutely, says Craig Collar,
senior manager for Energy Resource Development at SnoPUD. The university
publishes its data to the web within weeks, and is focused on developing a
methodology that can be standardized and put to use by other organizations.

Tidal power is not widely embraced by energy pioneers. Bill
Gates dismissed it as a secondary option in his speech at the Technology,
Entertainment, Design (TED) conference in February, citing carbon capture,
wind, solar photovoltaic, solar thermal and nuclear as the five best options
for that necessary miracle: reducing carbon emissions to zero.

But Thomson believes that tidal power has great potential,
although it will take time, following much the same path as wind energy. He
points out that in the late 1980s, wind was still an unreliable investment.

It took a long time to get the windmill to the point it is
today, where theres a refined design thats used by everyone, Thomson says.
I see kind of the same thing happening for tidal.

Klein and Collar agree that generating power from the ocean
currents is a demanding proposition. Their goal is to succeed in the three
departments they say are absolutely necessary: technology, environment and
economy.

Every one is a deal killer, Klein explains. Thats what
makes tidal such a challenge. You have to hit on all three cylinders in order
for it to work.

For the district, its a challenge worth taking on.

We have this clean, renewable, predictable power thats
generated close to where the load is, Klein says. Puget Sound, because of the
power of its tidal currents, may be one of the best places to exploit this new
technology. According to the Electric Power Research Institute, tidal power
generation in the United States, if fully developed, could produce an average
of 270 megawatts per year, approximately 3.5 percent of the total nationwide
electricity supply in 2004.

One of tidal powers strengths is its regularity. The thing
tidal has going in its favor, as opposed to wind, is that its predictable. You
can build it into your power system schedule, says Mark Savory, the vice
president of technical and construction services at Nova Scotia Power.

Unfortunately, as Thomson puts it, the oceans not a very
forgiving place. Seawater corrodes many building materials, and fast currents
require a solid, resilient design. The turbines SnoPUD plans to use,
manufactured by the Irish company OpenHydro, are rugged, anchored with a
weighted foundation that rests directly on the seabed. Nova Scotia Power is
currently testing OpenHydros design in the Bay of Fundy, where the strongest
tides in the world sometimes cause the water level to change by 48 feet in one
cycle.

But many biologists also fear that turbines will injure or
kill marine mammals and fish that migrate through the area or live full time in
the sound.

Theres no real evidence at all, yet, that they could or
should cause harm, says Collar of the turbines. They turn slowly (a maximum of
20 rotations per minute) and have no exposed blade ends. A large opening in the
center allows safe passage for animals, and the strongest water flow goes
around the outside of each turbine, Thomson explains, so currents are not pulling
fish toward the blades.

Other installations offer hope that marine life will be safe
from damage. The European Marine Energy Center installed an OpenHydro turbine
near Scotlands Orkney Islands, a highly productive environment, in 2006. Video
of the turbines operation shows no fish or marine mammals getting caught in
the rotor. A large population of endangered seals in Strangford Narrows in
Northern Ireland has stayed clear of two SeaGen turbines installed there in
2007.

On the economic side, Klein believes that tidal power is a
tremendous opportunity for the Puget Sound region. Tidal efforts have drawn
funds and recognition to many of the local organizations involved in the
Admiralty Inlet project. SnoPUD won research support from the Department of Energy,
which has provided a large chunk of the projects resources. DOE funding was a
kernel of success, says Collar.

A major cost of tidal installations is shipping the
turbines. OpenHydros 10-meter-diameter apparatus weighs 450 tons, including
the base. Luckily, the equipment is fairly simple to construct.

If you have a reasonably healthy marine industry in your
area, you can make these things, Savory says. Local manufacturing, a good
possibility given the Northwests strong marine infrastructure, would go a long
way toward keeping capital costs low.

The cost of tidal power is estimated at 20 cents per
kilowatt hour, says Brian Polagye, a research affiliate in the Unviersity of
Washingtons Air-Sea Interaction and Remote Sensing Applied Physics Laboratory.
This price means its already ahead of solar power (at 35 to 40 cents per
kilowatt hour) but will have a difficult time competing with traditional
hydropower and onshore wind. Last November, residential electricity in
Washington cost an average of 7.81 cents per kilowatt hour, some of the
cheapest nationwide. But as Klein points out, Snohomish County (and the rest of
western Washington) is growing rapidly, and theres little to no chance for
further development of cheap hydropower. Heavy taxes on carbon-based fuel could
make tidal power an attractive option, especially as the technology continues
to advance.

Ideally, SnoPUD will put the first turbines in the water in
early 2012. A 10-year permit will give the utility plenty of time to gather
data before expanding any further. Klein and Collar are realistic about their
goals. We will be informing the science and knowledge base whether we develop
this project or not, says Klein.

Thomson, too, believes the project has both local impact and
large relevance. He praises the teamwork that has gotten them this far.

Everyones learning, he says. Its been a wonderful
collaboration. I think thats exactly the way this should work.