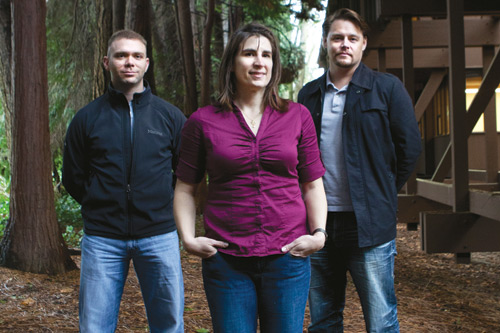 When loggers have finished harvesting a forest or farmers have harvested a field, they gather the remaining scraps in big slash piles and burn them. The practice generates large amounts of carbon dioxide and smoke while wasting valuable organic matter. Carbon Cultures, a startup launched by University of Washington students after they won a $50,000 grant from the National Science Foundation, has devised an innovative way to turn those slash piles into a commercial product called biochar, a type of charcoal that increases soil fertility.

Using biochar as a soil amendment isnt new. The practice may be centuries old. Carbon Cultures contribution is a heat-resistant, laminated blanket that is thrown over a slash pile up to 8 feet high and 10 feet in diameter. When the pile is ignited, the blanket restricts airflow and creates a chemical reaction called pyrolysis that prevents the organic material from combusting. Burning at elevated temperatures without oxygen for up to a day turns the slash pile into biochar while creating 70 percent less carbon dioxide than a normal burn. And since far less smoke is produced, the process could potentially be accomplished even during a burn ban. Pyrolysis does produce methane, a harmful greenhouse gas, but the company says those gases will be siphoned off and burned separately.

Carbon Cultures CEO Jenny Knoth, a doctoral student in forest resources at the UW College of the Environment, says biochar will enrich the soil organically and should find a market among wine growers, organic farmers and gardeners.

The business model is compelling. The reusable blankets are expected to sell initially for between $3,000 and $5,000. With the typical slash pile producing one to three tons of charwhich can sell for $1,500 a tonthe blankets will quickly pay for themselves. The main challenge, something the company is now tackling, is the mass manufacturing of a blanket tough enough to handle a rugged environment while providing a sufficiently airtight fit to keep oxygen out of the process.