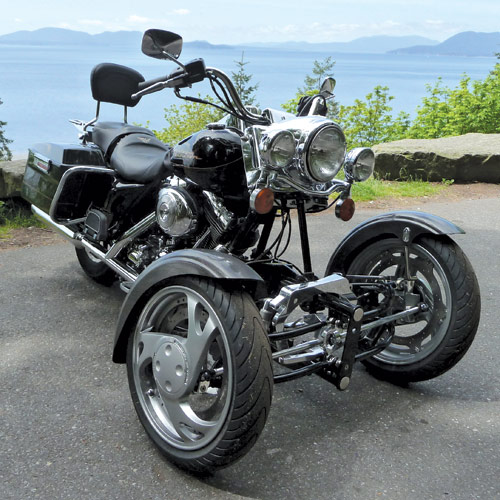 Motorcyclists like the open road and an open vehicle to navigate it, but some dont like the instability of two wheels.

The traditional solution: Add a third wheel, creating a powered tricycle. Bob Mighells improvement: Put that third wheel in front and engineer the bike so that it leans up to 45 degrees into a turn and handles like a two-wheeler.

Mighell, a veteran motorcycle rider and owner of a Marysville company that refurbishes operating room equipment, has been researching and refining his idea for nine years. Now his companyTilting Motor Worksplans to commercialize it.

Engineering drawings are complete, vendors have been lined up to produce conversion kits for the Harley- Davidson Road King and Goldwing models, and Mighell hopes to be in production and selling them through hundreds of independent dealers within six months.

A motorcycle is limited by the traction and braking you can achieve by having only a single front wheel, Mighell says. If you hit gravel or oil on the road while going around a corner, you can lose traction and also your braking, since 70 to 80 percent of your weight is transferred to your front wheel upon heavy braking. Adding another wheel up front can significantly improve your braking capacity.

Mighell says the trike handles just like a motorcycle. You can lean it over until you start scraping pipes or pegs whatever you would normally do on a bike.

Tilting Motor Works will get a big boost from the ready supply of sophisticated contract manufacturers in the region. Washingtons a pretty wonderful place to develop and build something, Mighell says, because we have quite a few high-end machine shops currently making stuff for the aviation industry.

Mighell hopes his kits will particularly appeal to older riders and to women, both fast-growing segments of the motorcycling community. He has driven prototypes to California and back, prompting considerable curiosity along the way. I cant stop anywhere without [ending up with] a pack of business cards in my coat pocket, he says.