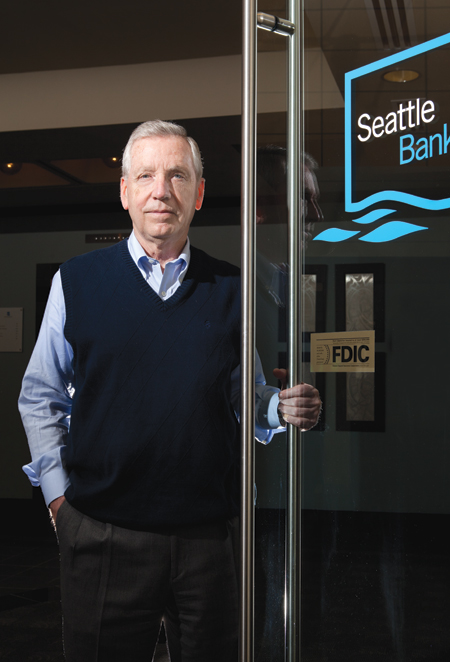 The news that Seattle Bank found an investor group to recapitalize the institution with $50 millionmaking it much more likely to be one of the survivors of the industrys financial debacleis fascinating on multiple fronts.

First is the fact that Seattle Bank will be one of only a few small, troubled Washington banks overloaded with sour real estate loans to be left standing. Finding the additional capital necessary to weather the typhoon is a feat several larger, better-known and older institutionsFrontier, Horizon, City of Lynnwood, to name just threewerent able to accomplish.

Next, theres the investor group itself. Rather than find another bank to buy it out, Seattle Bank turned to a group of more than 60 local investors, including such non-banking entrepreneurs as Rich Barton (co-founder of Expedia and Zillow), venture capitalist Nick Hanauer and cellphone industry veteran John McCaw. They were intrigued by Seattle Banks local brand, its marketing position, including tie-ins with the Seattle Seahawks and Sounders FC, and a balance sheet that could be cleaned up. As experienced businesspeople, they could see potential for long-term, steady returns.

Patrick, 69, is in his 49th year of banking, having spent part of his career at long-gone institutions such as Metropolitan Federal and Prudential Savings. He describes his recurring role of bank executive as testament to the sentiment [among bank directors] that at some time in his life he would get it right at least once.

J.D. Delafield, chairman of Delafield Hambrecht Inc., a Seattle investment banking company that recruited many of the new investors, calls Patrick a force of nature who quickly addressed problems that werent being addressed at Seattle Bank.

One reason Patrick gets drafted to run banks is his experience with messy situations. Before Seattle Bank, Patricks most recent posting was in Arizona, where he owns a home. His job there was to try to resuscitate a small bank, coincidentally founded by a former Puget Soundarea banker. This institution, too, had been left wobbly by the collapse of the real estate market.

Ultimately, regulators moved in and sold off the bank, a move Patrick has no problem with. The Arizona firm had 50 percent nonperforming assetsmeaning roughly half of its loans were delinquent or defaulted. A recapitalization or sale wasnt likely. The economic environment was very difficult in Arizona, much worse than in the state of Washington, Patrick says. No one was sure where the bottom was.

Seattle Bank wasnt in such dire straits, but it had problems, too. Formed in 1999 as an outgrowth of Seattle Mortgage, Seattle Savings Bank (the name was later shortened) was one of several such institutions set up by local home lenders to attract deposits with which to make loans.

The housing bust led to a surge in loans going bad, which led to federal regulators deeming the bank significantly undercapitalized and issuing several directives to Seattle Bank to clean up its act and find new capital or a buyer. The banks directors cut loose the then-CEO, Ellen Sas, and gave Patrick a call.

The family that had owned Seattle Bank were old friends of mine, says Patrick, who served on the banks board at its founding. I would have been very sorry to see the bank go out of existence. From that perspective, I wanted to help if possible…. They were in need of someone who had worked through problems similar to what the bank was facing.

The investor group had already been lined up when Patrick came on board last September, first as a consultant until regulators gave the go-ahead for him to become CEO. But he had his hands fullresolving litigation in California over reverse mortgages Seattle Bank had made, getting the capital deal closed, cleaning up the mortgage portfolio, reorienting the bank to a new strategic direction and convincing the regulators the program was working.

Seattle Bank has settled the lawsuits, the capital is in hand and the total of repossessed real estate and nonaccruing loans is declining. Patrick says its down to around $60 million from a peak of $152 million; total assets at the end of 2010 were $468 million. Plus, the FDIC has lifted its prompt corrective action order. Other orders are pending a full-scope examination, he says.

As for Seattle Banks new direction, Patrick notes the emphasis will be on small-business lending, which currently accounts for a scant portion of its portfolio. Its literally the old neighborhood bank, Patrick says. When you start a business in your community, youre liable to come see us. You wont see us financing a Boeing, but you will see us taking care of the local doctors or dentists or the person who started a business in the neighborhood.

That in itself is a tall order, because just about every bank in the region, large and small, is putting renewed emphasis on commercial and industrial lending. But Patrick says Seattle Bank will have one thing going for it: a great investor group. They have been recommending different customers to us, and we really love to see their active participation, Patrick says. Theyre bringing in deposits.

Patrick also has expansion in mind. At the moment, Seattle Bank, which is headquartered in Lower Queen Anne, has just five branches, and its ability to expand has been limited by its financial condition and by regulatory directive. Right now, all of our focus is on the Puget Sound region, Patrick says. Well be expanding outward from there when we have systems in place and are ready to take care of the communities in which we operate.

Patrick believes the new investors are in it for the long haul, and their backing will make it possible to shift focus from just keeping the bank open another month. Our job, he says, is to make sure its still standing 20 years from now.