Pensions in the Red

Back in 1989, then House Speaker Joe King summoned reporters to his office at the state Capitol building to announce one of the proudest accomplishments of that years Legislature. The problems with the states public employee pension system had finally been solved.

During the next 35 years, the state was going to catch up with all those payments it had missed. A $5.6 billion unfunded liability was going to be wiped out. And the thousands of teachers and public employees covered by the state programs could rest easy. Its one of the most important things weve done this year, he crowed.

Right now, Washington states oldest pension plans are in deeper trouble than they were 22 years ago. The unfunded liability is nearly $7 billion, the due date is just around the corner and theres no practical way to pay the bill. And as that time bomb ticks, the Legislature, for the first time, seems to be considering some of the same questions the private sector was forced to confront years ago. Do traditional employee pensions work? Is it even possible to go back and fix things?

Washington is in better shape than most states. According to the Pew Center on the States, Washington actually has the fourth-healthiest system in the country, 100-percent fully funded. Its not a basket case like California, Arizona or, worst of all, Illinois, where unfunded liability is 11 times Washingtons and lawmakers are wistfully talking about bankruptcy.

Heres the problem. That 100 percent figure is an average. Eleven of Washingtons 13 pension plans are fully funded, but those last two are absolute stinkeroos. 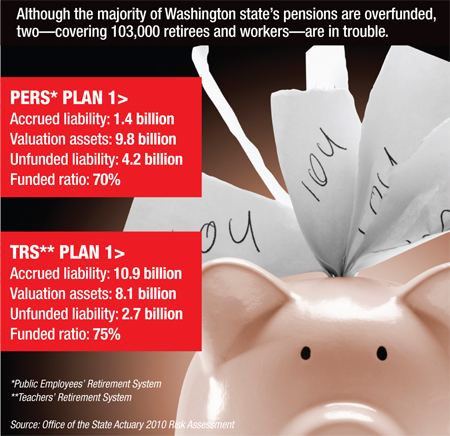 Theyre the states oldest pension plans, the Plan 1 versions of the Public Employees Retirement System and the Teachers Retirement System. Because theyre the oldest, they cover the bulk of the states retirees90,000 of themas well as 13,000 workers who are still on the payroll. Some 34 years ago, the state finally realized that it had boosted benefits and shorted payments to the point that it was better off closing the doors to new enrollees and starting over with new pension plans. The lucky older employees stayed on the generous old plans. And it was up to the state to find a way to pay for thema multibillion-dollar problem, but no biggie. The state had years to catch up.

The Best of Intentions

The problem ought to be obvious. No legislator goes through the trouble and agony of getting elected to office because they want to fund the pension system, says state Sen. Craig Pridemore, D-Vancouver. That 1989 payment plan was a flash of temporary sobriety, and it might have worked, if lawmakers had stuck with it. They did for a while, in the 90s. But the payments were supposed to increase over time. When those big bills started coming due over the last decade, lawmakers had other things on their minds. They shorted the payments in times of trouble. Even when times were good, they didnt meet their obligations, spending money instead on new programs and salary increases. Says state actuary Matt Smith, The short term usually prevails and, ultimately, it can make the long term worse.

The state pension funds were doing so well on the stock market that lawmakers thought they could get away with it. They even increased pension benefits, granting the Plan 1 retirees an automatic cost-of-living increase and giving the newer enrollees a cut of the stock-market winnings through a new benefit known as gainsharing. That meant even bigger expenses down the roadbut they were certainly popular ideas at the time. Its one of the easiest things for politicians to domake promises when they dont have to be around to pay for them, says Richard Davis of the Washington Research Council.

You know the punch line. The stock market crashed. And between 2008 and 2009 the state lost a whopping $15 billion, nearly a quarter of its investments, most of it from the state pension funds. Now it looks like those Plan 1 retirees might live longer than the funds the state had set aside for them.

Business Couldnt Get Away with It

Regulators would be blowing the sirens by now if the state were a private business. The plans are only 72 percent funded and heading downhill; before recent stock market gains, Smith projected that Public Employees Retirement System would slide to 47 percent and the Teachers Retirement System to 51 percent. Anything less than 60 percent is considered at risk. But public systems are treated differently. Washington state cant default on pensions; the state constitution wouldnt allow it. Taxpayers are stuck with the tab.

So the state finds itself in an unprecedented situation. The least expensive way to pay the bill is to invest in the stock market and let the money ride. But the catch-up has to happen fast. Actuary Smith is recommending a draconian plan that would force contributions to skyrocket, from about $700 million in the current two-year budget to more than $1.4 billion in the next one. Theyll keep going up, and stay high for a decade. Local governments that participate in the state planscities, counties, some school districts and otherswill have to make dramatically larger payments as well. And even if the state didnt face a whopping $5 billion shortfall this year, those steep increases would pack quite an impact. They will squeeze out the amount of money that can be spent for other purposesschools, colleges, prisons, social programs and everything else.

What the situation has done is force the state to concede things just cant keep going as they have in the past. Many in the business community and conservative quarters argue the state ought to move from plans that guarantee benefits to plans that merely guarantee the states contributionsrather like the 401(k) plans that have swept the private sector during the past 30 years. The old Plan 1 systems are really the legacy of the old way of thinking, Davis explains. Defined-benefit programs are something we really dont see in the private sector anymore. That day is long gone.

Not everyone agrees. State Treasurer James McIntire argues that its cheaper in the long run to manage the current system responsibly. McIntire is pushing a constitutional amendment that would force lawmakers to do that, requiring them to make at least 80 percent of the contribution recommended by the actuary. He unveiled the plan at a news conference in February, flanked by lawmakers who, at least in a collective sense, bear some of the guilt. I dont know if I would say, Save us from ourselves, Pridemore says. Perhaps it is save the entire state from all of us. 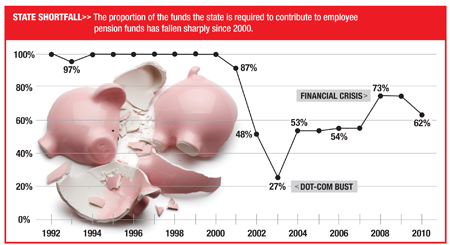 But that doesnt solve the current nightmareand thats where things get tricky. Right now, the Legislature is debating whether to cancel that cost-of-living allowance it granted in 1995. Gov. Christine Gregoire said in December that the state cant afford it anymore. I am a member of Plan 1, so I know the sacrifice that is being asked, she says.

The cut is the key element of her proposal, but there are other parts, such as canceling a provision in later plans that allowed a full pension even when employees retired early. All told, Gregoires proposal saves $425 million in the next budget, and $11.3 billion over the next 25 years.

Naturally, theres plenty of resistance from state employee groups. Its not as if the pensioners are breaking the bank, the unions say. The average pension is about $20,000 a year, the average cost-of-living increase $600.

To me, its pretty black-and-white, says Mark Brown, a former director of the state Department of Labor and Industries as well as a board member of the Retired Public Employees Council. Were being asked to pay the price for the Legislature shorting the pension funds over the last decade.

If the Legislature says yes, the public employee unions are certain to fight in court. Last year, a King County judge nixed a move to cut the gainsharing benefit. That case is being closely watched as it makes its way to the state Supreme Court, because the law granting the cost-of-living increase was worded the same way. If the unions win that one, the governors plan may be doomed, and its back to the drawing board. Theres one good thing about the situation, says House Ways and Means Chairman Ross Hunter, D-Medina. While this may appear daunting, just thinkyou could live in Illinois.