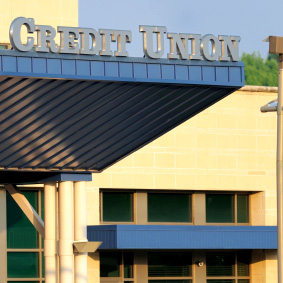 This should be a great time for credit unions to grab market share. Consumers are angry at banks anyway, and not too pleased about rising fees and paltry interest rates. Credit unions largely dodged the real-estate lending woes that required massive bailouts of the banking sector, and as member-owned cooperatives they tend to charge less and pay more. But credit unions have their own competitive challengesas in, who are these guys?

Run your finger down the list of credit unions in the region: Verity. Qualstar. Prevail. Watermark. Woodstone. Red Canoe. Do you know who they are? Are they even financial institutions?

Not only are they operating under generic names with little heritage, but theyre also operating with comparatively small marketing budgets to go up against the likes of Bank of America, KeyBank, U.S. Bank and Wells Fargo Bank, all with substantially greater resources and more powerful marketing legacies. BECUthe former Boeing Employees Credit Unionis one of the largest credit unions in the country and one of the few with enough heft to compete on that scale when it comes to marketing.

So whats a small or medium-size credit union to do?

In the case of Seattle-based Salal Credit Union, the answer on how to grow is retrench and refocus.

You might not recognize the name Salal, but youd almost certainly recognize its old nameGroup Health Credit Unionreflecting an affiliation with a major health care institution that, like the credit union, is also a cooperative.

The broader field of membership was one reason why the credit union changed its name to Salal last year. That move, the credit union said in a blog note, was designed to clear up lingering confusion about who we serve and who is eligible to become a member.

But while Salal is open to all, it has returned to its historic basehealth carein its recruitment of new members.

Weve refocused our membership outreach, says interim CEO Carol Belland (the previous CEO, John Iglesias, left in July to join a larger credit union in Oregon). We were started by a group of doctors in 1948, and our connection to the local health care community has always been fundamental to who we are.

The move to a statewide field of membership may have caused the credit union to lose some of its focus, she adds. Weve recommitted to the health care community by developing products and services tailored to and marketed to members of that specific sector.

But doesnt a generic name like Salal hamper efforts to reach people in health care? The credit unions executives dont believe so. Salal, they note, is the name of a specific Northwest plant that, appropriately enough for the credit union that borrowed its name, has medicinal value.

Its a hardy plant that weathers adverse conditions well, Belland says. We think thats an apt symbol for our credit union, particularly given our performance during the recent economic conditions. And theres a solid local connection: Were rooted here in the Northwest.

Salals executives and directors also liked the fact that the name didnt have a lot of connotations beyond the plant and hadnt been used by other businesses. It gave us the opportunity to create our own meaning, Belland says. Many brands have created their own definition: Google, Nike, Amazon. Those names are truly branded and have meaning far beyond their initial definitions.

To that system, Salal hopes to add products and services aimed specifically at health care workers, including loan discounts and deposit premiums, as incentives to join. Salal is also looking at moving into business lending, again targeting the health care sector.

Because health care workers spend so much time on the job, they need both flexibility and guidance when they do have a moment to deal with financial matters. Thats a level of service and attention credit unions believe is their specialty. In Salals case, it offers sit-down teller windows for customers, so that credit-union staffers can make sure theyre not only handling a routine transaction but also providing what the customer actually needs. Health care workers spend all their time taking care of others, Belland notes. Were here to take care of them for a change.

The difficulty in offering that level of personalized service is that Salal has only five branches, a fraction of the locations that major banking chains can offer. We have to overcome that perception of limited access, says Sheryl Kirchmeier, Salals senior vice president and chief marketing officer. We continually focus on education with our members about ease of access through our shared branching network (with other credit unions), which opens up their ability to transact at thousands of branches, as well as the credit union industrys ATM network. Were letting people know were more than five branches.

Salal does operate ATMs inside Group Health and Seattle Childrens Hospital. Something were looking at for the future is how can we do that sort of servicing inside a major health care center that makes sense for us and them, Kirchmeier says.

Much as banks have had to do, credit unions are learning theyll need to offer both face-to-face and remote access. Credit unions face a challenge of attracting and maintaining younger members, Cockburn says. The average age is up from 40 to 47. The peak borrowing years are 25 to 44. Younger members want convenience and options. Many credit unions are meeting this challenge with free online banking, mobile banking and use of social media.

In April, Salal added text banking. Kirchmeier says this service is especially important for Salals target audience, because health care workers tend to work really odd shifts. As much as we can make managing their money easy for them, thats really what our platform stems from. We have a way to go with technological advances to be able to serve this market and all of our members.

Salal is looking at other ways to strengthen its identity within health care, partnering with organizations through community programs and publicizing the good work these folks do, Kirchmeier says.

Credit unions do have the advantage of having a decent financial base to work from. Failures have been rare. The state Department of Financial Institutions says last years closing of The Union Credit Union in Spokane (Alaska USA Federal Credit Union took over certain loans and assets, while Numerica Credit Union assumed the deposits and membership) was the states first in 15 years. Salals 2010 net income was down from 2009 (Kirchmeier says that was due to increased assessments for the national credit-union insurance fund), but it remains in the black.

Cockburn says credit union membership grew at an annualized rate of 1.3 percent in the first quarter of this yearnot as robust as the 3-percent-a-year figures posted in the 1990s, but certainly better than the 0.67 percent growth rate last year. Salal says its household membership has increased 8 percent, to more than 28,000, since January 2009.

Salals decision to carve out some identity beyond trying to be all things to all people holds some lessons for all financial institutions, large and small. Few institutions succeed with such a broad mission, Belland says. Banks and credit unions can benefit by focusing on specific target markets and segments. We speak directly to our members in language that makes sense to them about the things that matter to them. Targeting allows us to be consistent and meaningful in our messaging.