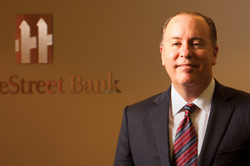 Some Washington banks made it through the recession in good shape. Some didnt make it at all, having been taken over by regulators or forced into mergers at distress sale prices.

Then there were those institutions that had some nervous moments, with red ink appearing on the income statement, uncomfortably large portfolios of problem loans on the balance sheet and regulators ominously looming over them with directives to shape up, find a buyer or face the fate of the now departed.

Seattle-based HomeStreet Bank was in that third category. The 91-year-old company, known as Continental Savings Bank until 2000, ran into trouble with a portfolio overweighted with land-development and home-building loans that went sour, sending provisions for losses on those loans soaring. Net income plunged into negative territory. State and federal regulators slapped HomeStreet with a cease-and-desist order.

Today, the picture is considerably brighter. HomeStreet returned to profitability in 2011, and net income for the third quarter of 2012 ($21.3 million, $2.90 per share) far exceeded analysts expectations. The problem loan portfolio looks considerably cleaner. After two postponements in 2011, during a particularly volatile time in the stock market, the bank completed an initial public offering last February, raising $88.7 million in new capital to bolster the balance sheet.

Best of all, in March of this year, HomeStreet announced that regulators had ended the cease-and-desist order, an acknowledgement that the bank was well on the way to full health.

And that picture raises an interesting question for institutions like HomeStreet that are back to good standing with regulators, back to profitability, back in the game: Now what?

How does a bank that had been mired in financial troubles shift its focus from cleaning up its internal messes to claiming market share in a tough competitive and economic landscape? What changes at a bank that has been through a near-death experience?

For Mark Mason, recruited to be HomeStreets chief executive in 2009, the shift is one from turnaround and cleanuptasks for which he was specifically recruited, given his backgroundto profitable growth.

Under the regulators order, Mason says, HomeStreet was specifically prohibited from opening new retail branches. Tougher capital ratios limited what growth the bank could pursue. With the order lifted, HomeStreet is making up for lost time. Our plan is to open one new branch a quarter, says Mason. Right now, the bank has 21 branches in Washington, Oregon, Idaho and Hawaii.

HomeStreet is also putting its profits and additional capital to work in a business line the company was built on: mortgage lending.

That development may seem surprising, given that housing finance was what got the economy and lenders like HomeStreet into trouble in the first place. But Mason notes that HomeStreet never indulged in the sort of lendingoption-ARMs, subprime loansthat sank Washington Mutual and others. Home-construction and land-development lending, which did cost HomeStreet directly and which, before the downturn, represented half of the banks total portfolio, is now a much smaller part of its book of business.

It is in conventional mortgage lending that Mason sees the most promise, especially with the Federal Reserve stomping on interest rates, providing attractive refinancing opportunities for many borrowers. What really helped get us through [the recession] was being a good mortgage lender during a period when that industry had gone through such substantial change and consolidation with the number of lenders decreasing very significantly, he says.

Now, Mason and HomeStreet are recommitting to that business in a much stronger way. When MetLife decided to get out of the mortgage origination business, HomeStreet hired many of MetLifes loan officers in Washington, Oregon and Idaho, effectively doubling its productive capacity in originations, Mason points out. The company continues to recruit loan officers from other companies.

Mason is deliberately and aggressively going after growth because he figures he wont get much help from the economy. If measured by the number of bank failures, the recession appears to be over, Mason says. But he adds, The environment for banking as a business is not as attractive, in that overall loan demand is down fairly significantly and some parts of the economy that really fueled the growth and created the real estate valuation bubble such as construction lending are at levels far below even average levels before the height of the market.

He also is not going to get much help from the competition. While the number of players in certain businesses has been cut, the big multistate players like Bank of America, Wells Fargo, U.S. Bank and KeyBank are still around, and several regional players, including Tacoma-based Columbia Bank and Oregons Umpqua Bank, strengthened and extended their market positions during the downturn.

Still, Mason believes he can carve out a sizable and profitable niche for HomeStreet as a middle-market consumer and business bank. At our size and our capital base, our lending limits are large enough to bank over 90 percent of the commercial customers in the Puget Sound, he says. Were not going to be the go-to bank for Microsoft or Amazon or Starbucks or some of these large multinational companies. But despite the size of those companies, theyre relatively few in number. Most of the business activity in the Puget Sound is conducted by companies smaller than that with much smaller size needs for their banking and borrowing. We are large enough to bank substantially all of the middle market in Puget Sound, which is large, but small enough and local enough that we can still provide that high-touch, fast-response, flexible service that you should expect from a community bank.

Mason also believes he does not have to do a lot of repair work on HomeStreets public profile or on rebuilding customer relationships. One reason is that many people still dont know who HomeStreet is. One of the benefits of being privately held prior to our IPO earlier this year is that we generally werent in the newspaper, he explains. That is a positive and a negative. HomeStreet today does not enjoy the general name recognition of some of the other community institutions. We have a marketing campaign coming that we hope to address that with. Most folks didnt know we were struggling. We dont wish to hide from that because it is a reality for the banking system as a whole. The important thing for our customers to take away from it is that it was a strong company that had the ability to manage through its own problems.

Having a low profile may not be such a bad thing. Jim Bradshaw, senior equity analyst at Bridge City Capital in Portland and himself a former bank examiner, says, When I talk to people outside of banking, the community banks and regionals are not held in the same low regard as the large national players. So it might be a competitive advantage for a while to not be a big bank.

HomeStreet, Mason adds, did not lose customer relationships of any material amount because of its difficulties.

While getting HomeStreet back to growth and profitability were tops on Masons to-do list, so is seeing that those difficulties dont return. Mason says HomeStreet and its banking compatriots didnt learn any new lessons from the recession, they just relearned the importance of an old, core lesson: diversify, diversify, diversify.

Diversification in your loan portfolio is one of the primary precepts of safe and sound lending in banking, he says. While HomeSteet had been successful for a long period of time as a construction lender, among other things, in hindsight, we had too much invested in land development and homebuilding before the recession. And while no one predicted the depth of the real estate recession and the decrease in home prices and land prices in particular, thats not an excuse. Diversification is one of the concepts you must constantly address. And while at times it may be frustrating because certain lines of business may be doing better than others and theoretically a company or a bank could earn more by concentrating on high-return business lines, you must accept the fact that for good, sound business management, you must diversify.

HomeStreet isnt alone as a revived institution in the Northwest. During the past two years the states Department of Financial Institutions has lifted regulatory orders against Sterling Bank, AmericanWest, First Savings Bank Northwest and Mountain Pacific. Most recently, Lacey-based Anchor Bancorp announced the lifting of a cease-and-desist order imposed by regulators (replaced by a supervisory directive with the state).

But, as Bradshaw notes, a return to health doesnt mean an end to challenges, just different ones.

For many of the survivors, its time to move from concentrating on survival to concentrating on healing and growth, Bradshaw says. Employees, managers and boards are all tired, though, and the shift in focus will require renewed energy. They need to focus on growing, serving niche markets and having fun again to reenergize their companies and themselves. The mood out there is almost like those folks that have been mourning lost loved ones. But the distractions persistits still a tough market, growth is choppy and its tough to fill the fun quotient.

Bradshaw speculates that some banks will not be able to pull out of the funk and will opt to sell. Takeover multiples are not great, though, and buyers are struggling to make sense of prices and the value of the selling bank. I expect some deals, but not tons of consolidation.

Mason is planning on HomeStreet doing more than just hanging on or hanging around. In the next five years, he says, it will become a much larger regional bank in terms of assets, branches and geographic footprint.

I believed when I was recruited to join HomeStreet that this was an unusually capable institution that had an ability to solve its own problems, to right the ship and to become not only profitable but significantly profitable in a relatively short period of time, he says. Now, all of that has come true far beyond my expectations.