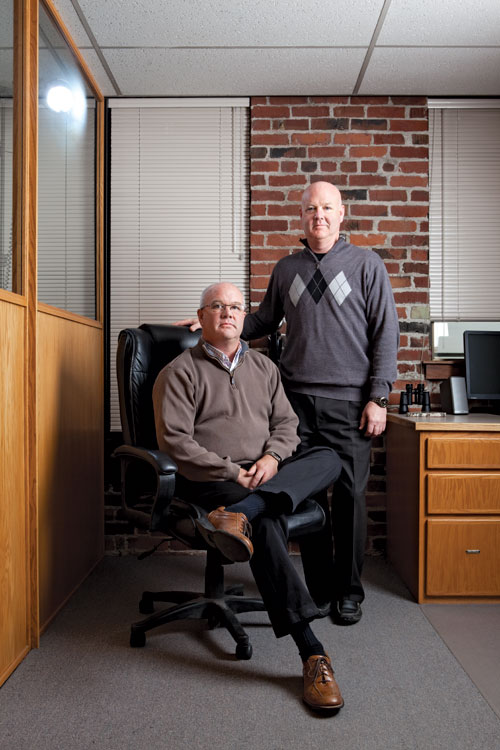 Goldfinch Bros. Inc. got its start in 1892 as a paint and glass supplier in Everett. Fast-forward 118 years and the family-owned business remains in its original location. Though its focus has shifted to residential and commercial glass and glazing, the company is still family-owned. It is run by the fifth generation of owners, brothers Greg and Geoff Goldfinch, with a sixth generation hard on their heels, now working at the company.

A fixture in downtown Everett, Goldfinch Bros. has approximately 90 employees and has managed to keep revenue growing in spite of the downturn in the local construction industry. This year the company expects to have $20.5 million in sales, up 12 percent from last year.

Looking to the future, Greg and Geoff Goldfinch plan to see continued growth. Proud to uphold the family tradition and its small-business values,

the brothers take an active role in the glass and glazing industry and are committed to providing quality products to their customers. Most recently, Goldfinch Bros. was recognized by the Puget Sound Consumers Checkbook magazine as a superior company based on its low prices and high product quality.

We have a saying at Goldfinch that we use to help us make business decisions: Goldfinch is a family-friendly, financially responsible business, says chief operating officer Scott Murphy. In other words, when we make a decision, we make it from the standpoint of doing the right thing for our business, our customers and our employees, as if each is a member of the Goldfinch family.

As a 118-year-old, fifth-generation business, adds Murphy, we are also cognizant from a financial standpoint of the legacy of Goldfinch Bros. Inc. that will be left behind for the next generation.

Cliff and Carolyn Flintoff founded Medosweet Farms in 1975 in the Kent Valley, selling fresh dairy products door-to-door. Since then, Medosweet has become one of the largest dairy distributors in the Northwest. Though the founders are semi-retired now, Cliff and Carolyn still sit on Medosweet Farms board. However, their sons Eric, Bryan and Craig, and daughter Teresa now run the 35-year-old company, and their grandson Stuart works as a route delivery driver while attending college.

While treating employees and customers like family, the Flintoffs have managed their company well, growing revenues by 70 percent during the past four years to nearly $50 million. The company plans to reach $100 million in sales by adding new product lines such as specialty cheeses and frozen desserts.

For more than 50 years, Dick and Esther Quint, owners of Aqua Quip, have been providing pools, hot tubs, fireplaces, barbecues and more to customers throughout the Puget Sound region. As new products were added, the business grew until 1999, when the Quint family merged with Tacoma-based Carlson Pool & Spa, making Aqua Quip the largest pool and spa retailer in the Northwest. Now, with nine locations and annual revenues of $14.5 million, the company employs about 75 people with an average tenure of 10 years. The firm says it has been successful because of its three operating valuesintegrity, family and excellenceand because it instills a culture of ownership among its employees.