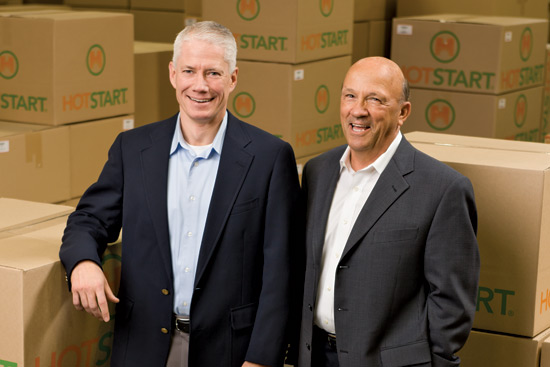 In March 2011, the family-owned and -led Hotstart Inc. surprised many employees and customers by selecting a nonfamily member as CEO for the first time in the companys 69-year history.

It was a surprise and a bit of a shock, says Terry Judge about his promotion from sales and marketing manager to the top spot. But I think its liberating and motivating that anyone can be CEO. It improves our integrity.

The company was established in 1942, when former print-shop-owner-turned-engine-heater-manufacturer Stanley Power bought out his partner. He was general manager until his death in 1958. Powers daughters, Loie Robinson and Colleen Randall, assumed ownership of the company, and Colleens husband, Hube Randall, became president and general manager until 1988, when his nephew, Rick Robinson, became CEO. Robinson retired earlier this year.

Maintaining an exclusive focus on engine heating, the business grew steadily, earning its first $20 million in sales during the course of 63 years, but taking only six years to double those revenues to $40 million.

Judge says the companys growth stems from the familys commitment to always move forwardmost recently by opening offices in Texas, Germany and Japan as well as expanding its Spokane manufacturing facility by 44,000 square feet.

Thirteen family members are shareholders and six serve on the board of directors, an arrangement that is a huge asset. They know the firm inside and out and are supportive and responsive, allowing Hotstart to react quicklya significant competitive advantage. L.W.

Holding the distinction of being the oldest family-owned drugstore chain in the nation, Bartell Drugs has weathered the last 121 years by sticking to [its] knitting and offering locally made products in all 57 Puget Sound region locations. While the company keeps its bright and airy store layouts standard and its branding traditional, it has deftly adapted by engaging customers with social media, offering speedy photo processing and assembling a board of directors with several outside advisers to propel the business into its next century. S.D.

Five years after W.B. Sprague founded his pest control company in Pierce County in 1926, A.H. Treleven Sr. bought the company and soon brought in his son, A.H. Treleven Jr. Now operating out of nine service centers in eight Western states, privately owned Sprague Pest Solutions was named a Best Company to Work For in 2011 by Seattle Business magazine and continues to grow and prosper under the third-generation management of brothers Larry and Alfie Treleven. To celebrate its 85th anniversary, Sprague entered a new marketDenver, Coloradoand initiated work on creating a succession plan. S.W.