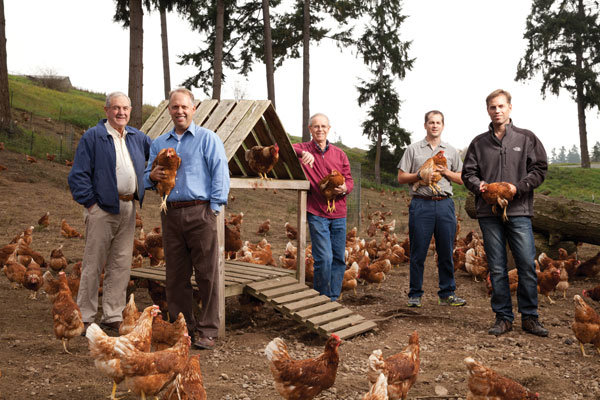 A fixture of the countryside southwest of Yelm for more than a century, Wilcox Family Farms has become one of the largest egg producers in the Pacific Northwest, with upward of $70 million in annual sales. The business has grown 15 percent a year for each of the past three years. Some 1.2 million chickens roam the ranch and every day they lay 1.2 million eggs. Once they start laying eggs, they dont slow down. We never have an off season, says Brent Wilcox, a fourth-generation family member who runs the company with his brother, Andy, and his cousin, Chris.

The Wilcox story starts with great-grandfather Judson, who left his familys farm in eastern Canada to strike it rich in the Klondike Gold Rush of the late 1890s. He never found gold but opened a hat shop just off Pioneer Square in Seattle. In 1909, he vacationed on a farm near Yelm and liked it so much he bought the place.

The direction of the business has changed over time. For many years, the Wilcoxes operated a dairy. These days, aside from a new venture into grass-fed beef, its pretty much all eggs, all the time. In addition to their original 1,600-acre farm, the Wilcoxes own a second near Wilsonville, Oregon, and they partner with Hutterite colonies in Montana to market eggs produced on ranches there. The Wilcox logo appears on egg cartons from Alaska to northern California and as far inland as Colorado. During the past dozen years, the family has been converting to cage-free production, in which chickens roam free during the hours when they arent laying. It is an expensive proposition, $1 million per chicken house, and Brent Wilcox proudly says his farm was the first in America to import the technology from Germany.

The enterprise is managed with an eye toward preserving and nurturing the business for the next generation. Family members who wish to join the business must obtain a college degree and work outside the family company for five years. We see ourselves as caretakers, Brent Wilcox says, making a profitable business operate during our generation that we can pass on to the next. Earlier generations … could have sold out for real estate development and they didnt. They chose to continue farming and make a go of it, so we think it is our responsibility to do the same thing.