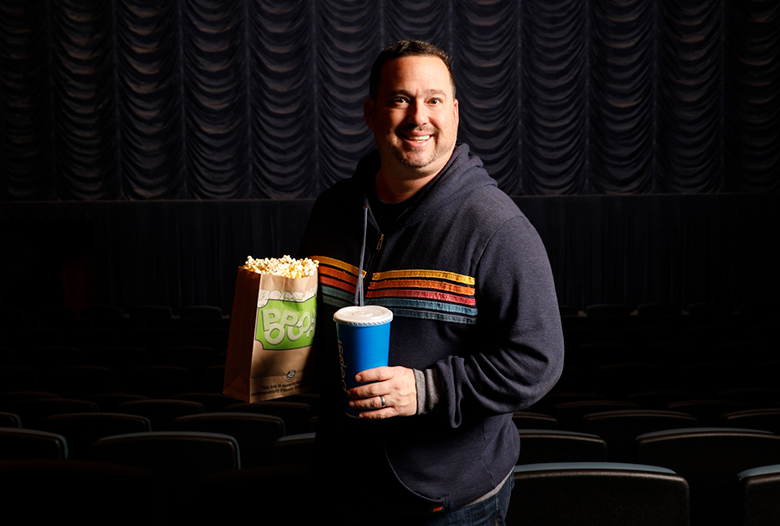 On his first day of work at Longacres Racetrack in Renton, 14-year-old Ken Alhadeff put on his best button-down shirt and slacks. He couldnt wait for his chance to join his father and grandfather in the family business of horse racing.

When he arrived, Alhadeff learned that he didnt need the fine attire. His job, his family told him, would be to clean the bathrooms. Just like all the other Longacres employees, Alhadeff would start at the bottom and work his way up.

Its that work ethic that Ken Alhadeff wants to carry on at the familys current brick-and-mortar business, the Majestic Bay Theatres in Ballard. Though the Seattle family sold Longacres to Boeing in 1990, Alhadeff wanted his children and grandchildren to learn the same business principles he grew up with at the racetrack. A theater, Alhadeff believes, teaches the family pride in serving the community.

I wanted to give myself, my children and my grandchildren a business where they had the opportunity to interact with the public, Ken says. My hope is that everyone spends a little time making sure the bathrooms are clean, popping popcorn or getting a booster seat for a child who cant quite see. The exact reason for the Majestic Bay all goes back to Longacres.

It was a different time, says Aaron Alhadeff, Kens son, of the heyday of Longacres. Waiting 40 minutes between races became antiquated. The land inside the oval wasnt being used.

In addition to real estate, Ken Alhadeff produces musical theater on Broadway and for the 5th Avenue Theatre in Seattle through Junkyard Dog Productions and Alhadeff Productions. One of his companys original musicals, Memphis, won four Tony awards.

The Alhadeffs extensive philanthropic work has benefited education, health care, the arts, the homeless, the local film industry, the Jewish community, the Special Olympics and countless other causes. Ken encourages his three children to devote a significant portion of their time to community service, telling them he places as much value in sitting on a nonprofit board as meeting with an investment banker.

The Alhadeffs soon discovered their modest side project would require greater investment, however. A single screen didnt give the public enough choice of content, and contracts with studios require that a cinema run movies for six weeks. The building was in such a state of disrepair that renovations wouldnt be simple.

The Alhadeffs ended up tearing the old theater down and building three auditoriums, each named after one of Kens three children.

They incorporated wood from the original structure and added nautical details as a nod to Ballards ship-building industry. Some of the theaters windows resemble a ships portholes, jellyfish art hangs from the ceiling and parts of the building are trimmed with mahogany. To acknowledge their own family history at Longacres, the Alhadeffs hung English horseracing prints on the wall.

Though the Majestic Bay will never replicate the options of a big, modern multiplex, the Alhadeffs dont want to go that route. Aaron and Ken hope locals will see the theater as clean, comfortable and impeccably managed with the confidence of knowing that if something breaks, its repaired immediately. The dream was owning the finest neighborhood theater, Ken says.

Ken recalls the first time he came down from the upstairs office to greet patrons and hand out free candy and T-shirts. The surprised moviegoers thought he was going to tell them the movie was canceled, since theyd never seen an owner take the time to shake their hands before a film. The Alhadeffs see the Majestic Bay staff as a key component to the neighborhood feel of the theater. They hire teens from Ballard High School and wont entertain the idea of serving alcohol at the theater because they want to continue employing local youth.

Majestic Bays general manager, Brent Siewert, has known the Alhadeffs for decades. He first worked at Longacres when he was in junior high school. He started as a sweeper, moved to the dining room and eventually became their catering manager staying until the business was sold. Years later, after the Alhadeffs had just acquired the Majestic Bay, Siewert ran into Ken and was recruited to rejoin the familys team. Siewert says he feels the Alhadeffs pride of ownership is a vital part of their business success.

When the CEO lives by his business, it comes with a different set of expectations, Siewert says. Im always trying to make the family proud.

Ken emphasizes the familys respect for all of its employees. Its a message that was drilled into him at Longacres. At age 13, he received a go-cart as a gift at his bar mitzvah. He brought it to the Longacres parking lot to drive around. Kens grandfather stopped him, pointed to the sweepers cleaning up the lot, and told Ken that he didnt want his employees to watch him play while they were hard at work. We have a culture of lead by example, Ken said.

Although many theaters have shifted to much larger lounge chairs, Aaron decided to upgrade the seats but keep the auditorium arrangement as is. Majestic Bays biggest 230-seat theater would become just 80 seats with the lounge model, which the Alhadeffs feel would create large pods and take away from the sense of community. For now, my dad likes the notion of 230 people stepping on each others toes, Aaron says.

One recent event attracted Camp Goodtimes, which hosts camps for children with cancer. Around 50 to 60 kids and their families came to the Majestic Bay for a private movie showing. During the holiday season, Seattle Childrens Museum staff came in for a special screening. The family regularly invites kids in from Make-a-Wish which serves children diagnosed with critical illnesses.

The Majestic Bay also supports local artists by loaning the facility space for free. In November, Seattle pop music artist Scarlet Parke held a music-video release party at the theater, screening both the video and a making of film for fans. I think its rare for a theater to let us come in and do this, says Mira Kraft, manager for Scarlet Parke. To care about the community you are in is really beautiful to see.

Because the Alhadeffs view the Majestic Bay as a community project and not just an investment, Ken occasionally weighs in on the types of movies shown at the theater. Aaron recalled his father calling him after the movie Hannibal came out. Although the film about a serial killer was at the top of the charts for weeks and would be a money-maker, Ken didnt want to show a movie with scenes of gratuitous brain eating.

Our business is economically viable, but its not only driven by the bottom line, Ken says. It all leads with the human condition. How do we treat our employees and our patrons?

Whether Kens grandchildren, who are still young, choose to work at the Majestic Bay remains to be seen. He appreciates that the theater is a relatively small project, which will give members of the next generation the chance to determine if they want to pursue other business opportunities.

Longacres was magical and beautiful, but I didnt feel like I had a choice, Ken says. My goal for future generations is they get as educated as they can and then decide what they want to do.