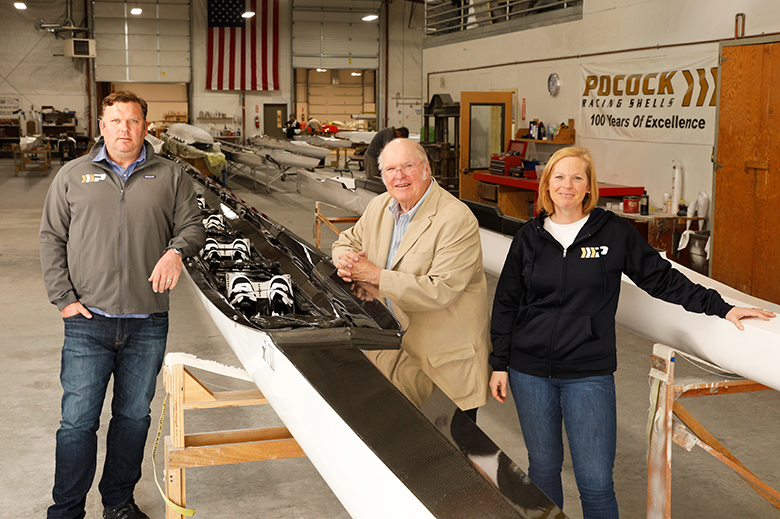 Pocock Racing Shells, a maker of carbon-fiber shells for competitive rowing teams, is a 108-year-old company that has played an integral role in the storied boat-building and rowing traditions of the Pacific Northwest.

George Pocock, the founder of the company (at its helm from 1911 to 1976), raced single shells on the Thames River in England, using the winnings from a race to pay his passage to Canada in 1911. From there, he was enticed to move to Seattle to build boats for the University of Washington, and his company was born. By the mid-1970s, leadership was passed on to Georges son, Stan, who grew up in Seattle and rowed at the UW and later coached gold-medal rowing crews at the 1956 and 1960 Olympic Games. Stan, who learned the craft of boat-building from his father, ran the company until the mid-1980s, when he sold it to a close family friend, Bill Tytus, after it became clear Stans children did not want to take over the business.

Tytus also was a lifelong rower and coach who was coached by George and Stan Pocock. The company recently made yet another transition when ownership and leadership moved to Tytus children, John and Kate, who are also accomplished rowers and coaches.

The 22-employee Pocock Racing Shells has chalked up double-digit annual revenue growth since 2016 and doubled the size of its shop in Everett to nearly 30,000 square feet to expand boat production.

The Napoleon Co. imports specialty food products like oils, pasta and vinegars that are sold through a network of retailers, including Amazon, Walmart and Bartell Drugs. The companys roots date to 1903, when Antonio Magnano emigrated from Italy and opened a wholesale food business in Seattle. Some 25 years later, the second generation of Magnanos joined the company, then called A. Magnano & Sons. By 1960, The Napoleon Co. was born, launched with the proceeds of the majority sale of A. Magnano. The third generation now controls the family business, under Napoleons owner Joe Magnano with the fourth generation of Magnanos also onboard, including brothers Milo Jr. and Tony, who are sales executives. The generational firepower has helped the 10-employee company triple revenue the past 15 years.