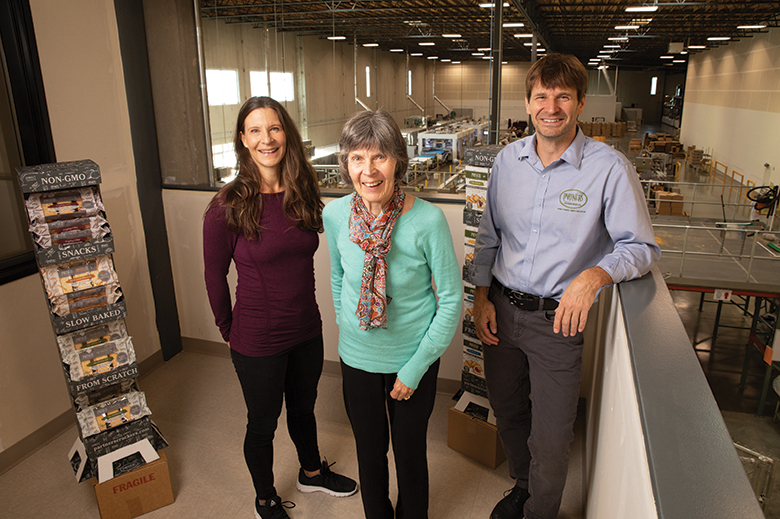 Restaurateur Marian Harris couldnt find the right crackers for her homemade soups and salads, so she decided to make them herself.

That eventually led to Partners, A Tasteful Choice Company, which Harris launched in 1992. Today, Partners makes a variety of crackers, granola and cookie crisps from its 150,000-square-foot production facility in Des Moines.

The company opened the facility in 2017, moving from its longtime space in Kent because production had reached capacity. The new facility can produce 36,000 pounds of crackers daily, or roughly 11 million crackers per day. It is LEED-certified with state-of-the-art controls, and 100% of the companys purchased energy comes from green power sources.

The plant has allowed Partners to ramp up its private-label business, with more growth projected for next year. The company employs 70.

Harris son, Greg Maestretti who has a degree in physics joined the company for a couple of weeks back when it started. Hes still there. Shortly thereafter her daughter, Cara Figgins, who had just graduated from law school, also joined. She had originally planned a career in law but she also still works there.

Dillanos Coffee Roasters Inc. began as a small espresso cart in front of a mini-market in Buckley. The company today employs 80 and makes coffee and products for small retailers, large franchises, distributors and food-service vendors. In 1991, David Morris managed the small cart in front of that store, which was owned by his father-in-law, Howard Heyer. As the business shifted to roasting, Howards son, Chris, signed on, and today both Davids son, Dillon, and Chris son, Skyler, are learning the business from the ground up. Dillanos garnered some publicity earlier this year when its barista trainer, Samantha Spillman, was named the 2019 United States Barista Champion.

When II Terrazzo Carmine owner Carmine Smeraldo died unexpectedly in 2011, 24 years after opening the iconic restaurant, his wife, Maria, took over. Shortly afterward, their two sons, Carmine and Philip who were in college at the time of their fathers death joined the business. Since then, the company has been on a growth trajectory, opening an upscale cocktail bar adjacent to the restaurant called Intermezzo as well as Carmines, a thriving, upscale Italian restaurant in Old Bellevue. Because the number of family members who are shareholders is still small, informal family meetings are generally used as strategy sessions. Revenue has tripled during the past 15 years.