Kristoferson Farm is the Gold Award winner at the Family Business Awards. 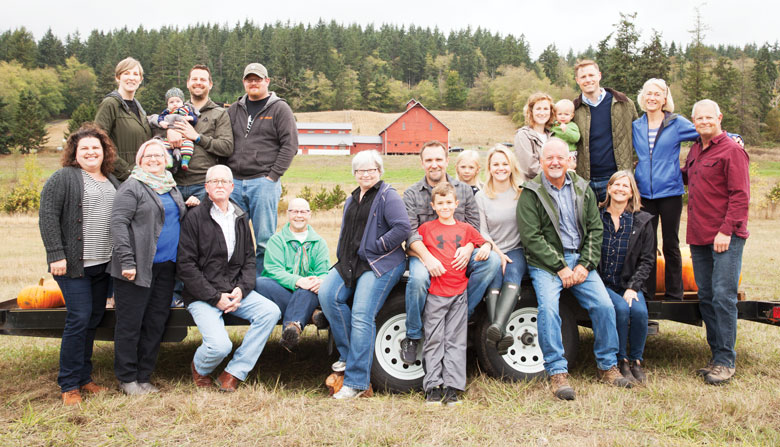 Kristoferson Farm has cultivated beyond agriculture. Visitors can zip line over its forests or stay on terra firma to enjoy monthly farm-to-table dinners.

The farm maintains a sustainable timber business and grows organic products such as hay, lavender and apples. It sells its commodities wholesale as well as from an on-site store.

For the zip line adventures, Canopy Tours Northwest has attracted more than 50,000 guests since 2011, and for the past two years, the farm has hosted 50-guest dinners inside its barn, featuring food from local chefs and wines from the region.

The farm employs five full-time and 40 peak-season workers. Since 2011, newer enterprises have hiked revenue from five figures to the high six figures, says Mona Kristoferson Campbell, co-owner. The profit goes toward maintenance and preservation for bridges, barns, roads and habitat.

The business has been honored for restoring salmon-bearing streams and wildlife spaces. Campbell and four siblings, as shareholders, view themselves as stewards, passing heritage to future generations. Their roots go back to Campbells great-grandfather, Alfred Kristoferson, a Mercer Island and Seattle pioneer dairyman who bought the farmland in 1912 for his son, August, Campbells grandfather. Operations on the 231-acre farm now involve 25 family members ranging from 6 months to 93 years, including a sixth generation.

We know the farm and each other so much better as a family, Campbell says. Thats been a wonderful bonus.

The operation makes bulk wine for Claar Cellars and for sale nationwide. Its bottled wines are sold in 26 states, as well as Canada, China and India. Cristas grandfather, Ed Albro, once envisioned a vineyard as he stood overlooking the Columbia River.

But it was her parents, Russell and Audrienne Claar, who developed the farm in 1950 and planted the first grapes in 1980. Cristas sons, John and James, members of the familys fourth generation, joined as full partners in 2013 after being raised on the farm and working alongside their parents.

Founded in 1891, Washington Shoe Company has made large strides since it began making rugged outdoor boots under the Western Chief brand for prospectors heading to Alaska and the Yukon during the Klondike Gold Rush.