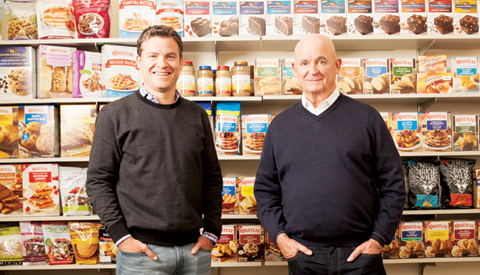 Continental Mills has a staple of tried-and-true brands such as Krusteaz and Alpine Cider Mix, but to reach millennials it has devised new brands such as WildRoots trail mixes and Buck Wild natural snacks. The snacks are available at many retailers, from Starbucks to Walmart. Third-generation President Andy Heily, 44, who has led the charge, says the company launched the effort in 2012 after recognizing a trend among young people who were seeking smaller meals of natural, nutrient-dense snacks throughout the day. Continental began in 1932 with the novel idea of a just-add-water pie crust mix devised by a Seattle womens bridge club. Heilys grandfather, a door-to-door dress salesman, knew the women and joined the business. In the 1950s, the company added its popular, just-add-water pancake mix. Heilys father, CEO John M. Heily, took the company to another level by the 1970s, when he won the bid for Continental to provide food service for the Alaska Pipeline project. It ramped up production to feed thousands of pipeline workers and built a new manufacturing facility to create muffin, quick bread and cookie mixes. Today, with two-thirds of its 850 employees in manufacturing, Continental Mills believes it is imperative to drive growth to keep jobs intact, says Heily. As the only two family members in daily management, he and his dad are aligned on what we need to do, both short and long term.