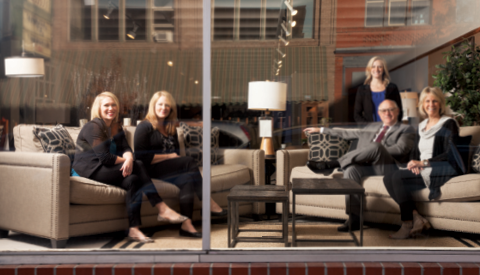 Established in 1896, Fitterers Furniture has its roots in the founding of Ellensburg. Brothers Phillip and Frank Fitterer came to Yakima from Minnesota in the late 1880s and then moved to booming Ellensburg to work for the pioneering Horton House hotel. When it closed in 1896, they began operating a secondhand store to sell the hotels furnishings as well as excess supplies sold by contractors on the railroads. No-interest financing helped boost sales. By 1909, the Fitterers had built a large brick building to house a new store. Big window displays attracted locals shopping for home furnishings. Hot coffee around a potbellied stove provided added inducement. Today, the store has a mattress studio and an interior design space and Fitterers delivers its furnishings statewide, but the zinc-plated cash register reminds visitors that Fitterers Furniture has a long history. In the late 1980s, fourth-generation descendants Brad and Jon Fitterer bought out Jons dad, Joe. In 2011, they agreed that Brad would acquire Jons share. Brad now operates the store while his wife, Connie, serves as a corporate officer. Both encourage employees to serve nonprofits and community organizations to continue the Fitterer legacy. In 2002, the Fitterer family was inducted into the Ellensburg Rodeo Hall of Fame in recognition of its many years of enthusiastic support. Says Brad Fitterer: Giving back to the community is an important part of what makes a person whole.

Sweat equity comes naturally to three generations at Plemmons Industries, which owns and leases warehouses, offices, retail spaces and homes. Founded in 1965 by Jim Plemmons, the company now has 12 employees. Two sons and a daughter, who began their careers laying foundations and painting homes, continued their roles in the company after college. Younger generations must hold outside jobs before returning to the company to start at the bottom. The business continues strong growth as King Countys population expands. Adding an industrial storage option in the past two years opened another client base.

Four sisters and a brother operate Morpac, a custom manufacturer of specialized equipment for electric utility and electric valve actuator markets. The business was started in 1956 by Lloyd Morgan, who died in 2011. Today, Morpac has 42 employees, including 18 at headquarters, where the company makes electric motor actuators used on Navy ships, and 24 in Tucson, where the company makes switches for substation equipment. The Morgans take a team-management approach, says President Heidi Morgan. Her brother, Pete Morgan, is sales manager, sister Gretchen Morgan, purchasing manager, and sister Christine Dixon, human resources manager. Sister Erika Morgan is retired and serves on the companys board.